The 2021 Gardening Thread - what's going on in your yard?

Well it has been cooler last few days and I checked again and must have missed the tiny buds previously and the cucumber is back producing .

That looks like a few peppers, cucumber, tomato…very nice.

Weds 8 July on the allotment, I took up all the remaining potatoes - about 25 plants (so we had used 5 or so up to that point). I have learned the hard way that if you wait the yields may go up, but pests will get at the crop. The harvest this year was about two weeks later than last year - which shows what a cold, late summer it has been.

With great diligence I sorted the plot out immediately. The allotment has 5 strips (plus asparagus beds), and potatoes occupy three quarters of strip one and all of strip three, with pumpkins and squash in strip two.* I weeded and covered strip three with fabric, save for a couple of feet at one end. This space will be expansion room for the pumpkins and squash over the next couple of months. The couple of feet left uncovered I planted with broad/fava bean plants that I germinated a few weeks ago. With luck, and a better second half of the summer, I should get a late crop.

The free space in strip 1 I dug over and planted with late peas and turnips as second crops.

Because everything is so late this year, all we’ve had off the allotment so far is asparagus, potato and courgette/zucchini. But broad beans and peas (the early sowings), runner beans, and cucumbers are only a few days away. And at home, salad leaves are finally in full swing, and most of the berries have been picked. We had an amazing yield of gooseberries - half a stone off a single bush!

* - I’ll use the same configuration every year, but I rotate it between strips - next year maybe it will be 4 and 2 with pumpkins in 5.

Am now getting chard and green beans for dinner off my balcony. The parsley is going nuts (again). The lettuce hasn’t fared too well, half of it just up and died but what survived is starting to come along nicely and, amazingly, has NOT bolted yet!

Finally put all the pollinators perennials out front. Discovered despite tilling fairly deep, there was still tons of stupid river rock, so everything had to be hand dug.

Cilantro hates me. Three plants dead. Have had a lot of green beans and peas. Peas are almost dead, about to pull and replant. Sadly, the romas have blight. I treated them yesterday, so I’ll see what can be saved. Jalapeños are blooming. Fish and green peppers are slow, but steadily growing. Zucchini is flowering. The less said about broccoli the better.

Fish and green peppers are slow

… fish peppers? (The hell did autocorrect do?)

Fish Peppers
Future son-in-law introduced me to them. The paler they are, the sweeter they are. Well, not sweet, there’s still a little heat.

Blueberries are done, only got a handful of raspberries this year. I have a bowl full of cherry tomatoes that will go in lasagna tomorrow - the plant they came off of was supposed to be a roma; surprise! They are good though. The dill has bolted, unfortunately, but all the other herbs are doing well. The deer got to the chili peppers and ate the tops off, so it will be a while until I get any more - so far I’ve gotten several very large cayennes and a handful of decent sized shishitos. 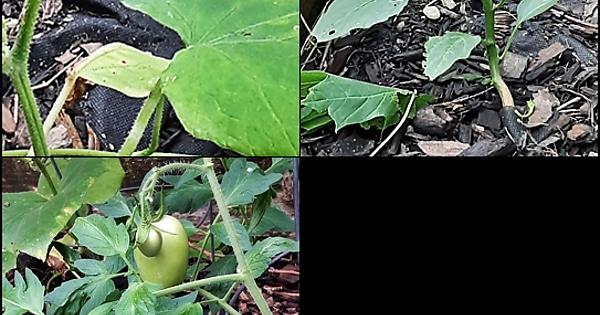 My first cucumber! The tomatoes are definitely a plum variety and the peppers don’t look like Bells. Keeping up with the weeding and would be prouder of myself if I pruned. Baby steps!

Only one of my three tomato plants is producing anything. I’m not even getting flowers on the other two. I can’t figure out what the problem is. What’s particularly annoying is that one of the non-producers is my beefsteak tomato, which I was hoping to serve as a source for tomato sandwiches.

On the other hand, I’m getting a good crop of banana peppers. And my herbs are all doing well.

Fish Peppers
Future son-in-law introduced me to them.

What you’ve done is more important than what you haven’t.

One cucumber usually → many, many cucumbers. Hope you have a bountiful harvest ahead!

I spend a lot more of my limited energy on the veggie plot but I did do a lot of early work cleaning up and de-weeding the bed underneath my front bay window. My son was ready to dig up the hygendras because the looked pretty much dead. They didn’t produce many flowers, maybe 3 or 4 weak ones. Now look what just a little bit of attention did to them! They need pruning and I am not a pruner, as noted earlier.

Always wanted dinnerplate Baltimore type hardy hibiscus and when I went to Home Desperate in the spring for supplies I saw this lonely, half-dead, dried up, not-dinnerplate-or-Baltimore hardy hibiscus plant on sale-- reduced from $32 to just $13. I felt bad for the bedraggled thing, it was cheap and so. . . here it is looking pretty! 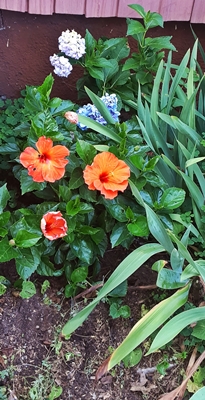 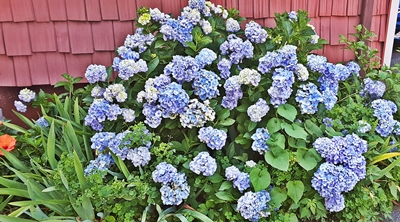 This morning I pickled a couple of pints of picked peppers. Nice big, red jalapenos. Got sliced, brined and stashed in the fridge. What I’m going to do with the others I’m not sure yet. Probably freeze. The Sugar Baby icebox watermelon has taken over the corner of the yard. If it gets much bigger I’m going to start hearing “Feed me, Seymour!” Beefsteak tomatoes are so far a bust, but the cherry tomatoes are producing just fine.

Biggirl, your flowers look great! I don’t do a lot of flowers since the deer just eat them unless I put pest covers over them, which takes a lot of the visual appeal away. I did try some sweet peas this year. Got one stinkin’ bloom - but plants are growing like crazy. ::sigh::

try some sweet peas this year

Even if they didn’t bloom all pretty, peas are nitrogen fixers (like other legumes) and their presence should hopefully help your soil a bit.

Or, rather, that was my theory, when I planted sweet peas this spring. (The soil here at this rental is a mess - poor, compacted, years of cars parked willy-nilly - the local weeds won’t even grow in it, which is always a bad sign.)

I got a sunflower blossom the other day! May og and all the gods bless the black oil seeds in birdseed mix - they seem to produce the hardiest sunflowers.

The free space in strip 1 I dug over and planted with late peas and turnips as second crops.

And they have both been up for a couple of days, now. We’ve had alternating rainy and sunny, so things have been germinating fast (4 or 5 days).

And today I picked and ate the first mini cucumber of the year - delish, and there are dozens nearing readiness.

I have a question for the other gardening folks here, but it’s about an indoor plant.

Last year when my husband retired, he was given a cute little cactus garden. One of the plants in it promptly croaked, but the other two are going strong - particularly the aloe plant. It’s apparently a climbing aloe plant and is getting fairly top heavy. Is it possible to prune a cactus? It seems a bit silly to make a trellis for an indoor plant …

You can prune succulents and it may or may not encourage branching. I do that with Thai hybrid euphorbias which resemble cacti. With so-called climbing aloe, sources say you can use the cut branches to make new plants. You let them sit for at least a few hours or better yet a day so the cut end dries out, then plant in moist (not damp) potting medium (they tend to rot if immediately sunk into soil).

I need to go outdoors to check on whether my efforts to spray-assassinate Japanese beetles last evening were successful. They were chomping on my roses and crepe myrtles, the little bastids.

Cucumber is still producing 6-8 a week. Habernos kicking in with maybe 30 fruits growing and in a couple of weeks they should be good for the habernero jelly. The jalapeno gave up about 5 fruits, very slow going that one.

Thanks for the info - I don’t think I want any more of these things, but I am going to try pruning it and see what happens.