The Adventures Of Colonel John Blashford-Snell Soldier Of The Queen. HUZZAH! Newslink 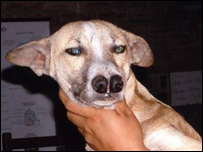 Does a dog with two noses smell twice as bad?

And Dopers are so blase they only can crack one reply?!

“Xingu is said to be intelligent and fond of salty biscuits.”

Ah, the story of my life right there.

But a man really named Colonel John Blashford-Snell? Almost too good to be true!

Amongst his expeditions have been the first descent of the Blue Nile (in 1968); a north–south journey from Alaska to Cape Horn with the first vehicular crossing of the Darién Gap (in 1971 to 1972); and a complete navigation of the Congo River (in 1974 to 1975).

That article is just full of great one-liners:

“…sitting by the fire one night, I saw an extraordinary-looking dog that appeared to have two noses. I was sober at the time…”

“He had just produced a litter of puppies with a bitch that had a single nose.”

“Xingu is said to be intelligent and fond of salty biscuits.”

I swear this was a Monty Python skit!

Precisely.
Thanks bosda. I look forward to dropping Double Nose Andean Tiger Hound into conversations. Doesn’t that sound like something Dan Ackroyd would say in Ghostbusters

John Blashford-Snell not only exists, I have met him. In fact, I almost joined one of his expeditions to the Darien a few years ago.

Since I’ve got a lot of interest in the Darien myself, I’ve read several of the accounts of Blashford-Snell’s expeditions there too. As has been mentioned, he led a British Army group that crossed the roadless Darien Gap by car by hacking out a primitive road in 1972. (Not actually the first, as the article has it, but the second.) A few years later, he also led a trip to the site of the lost Scottish colony on the coast of San Blas at Caledonia Bay.

He came back to Panama a few years ago planning a trip to re-open some of the excavations at Caledonia Bay. I met him when he gave a talk on his plans at the British Ambassador’s residence in Panama City. He’s the kind of guy who talks entirely in anecdotes.

As it turned out, he wasn’t able to go back to Caledonia Bay because the Kuna Indians, whose territory it is, wanted to charge him exorbitant fees. Instead he did a trip to the Pacific coast of Darien. I was invited to go, but because of some missed communications wasn’t able to make it down there in time. It would have been interesting to say the least.

Such a man deserves more than just…John…as a first name. He could be John Something (Edward? Dunstan? Antony?), or several initials like J.Q.K., or call himself Jonathan, Jenkin, or Sinjin (St. John).

If he simply must be John, there’s always the enigmatic spelling “Jno.” (pron. “John”).

John Blashford-Snell not only exists, I have met him. In fact, I almost joined one of his expeditions to the Darien a few years ago.

Wow! It’s posts like this that make me want to chuck it all and become an adventurer. Then I remember I hate bugs, mud, bugs, missing hot meals, bugs, sleeping on hard ground, large bugs, biting bugs, and, oh yes, bugs.

I can guarantee you would not like the Darien one little bit, then.