The aliens in the Alien franchise

What exactly made the aliens such ferocious adversaries? Their main tactic seemed to be sneaking up on people from behind. If the Marines had stuck together, with guns pointed in all directions, they might have had a chance, but of course, it’s a horror movie with bad decisions being made. Were the aliens immune to bullets?

Their freakishly strong acid blood was an issue.
They’re very strong and very fast.
But yes, a well led squad of Marines should have been able to do far better. They were not actually well led.

Of course in the first movie, you just had a small cargo ship crew to try and stop the Alien.

The Aliens built their nest in the second movie in the Fusion plant and so the Marines had to be more careful than they liked. Explosives were not authorized.

2: Their acid blood means that, even if you do kill them, if they can get close to or above you, they can still do serious damage even in death. This is especially relevant in tight terrain like narrow corridors: If you can’t even take a shot until they turn the corner, then they can get close.

The marines in Aliens do pretty well, all things considered. They were seriously outnumbered, and their first major engagement was an ambush inside a hazardous area where a stray bullet could have blown them all up. They had no idea what they were up against (despite Ripley’s continual warnings) and spent the rest of the movie trying to make up for their early losses. A well-equipped and briefed platoon that didn’t care about collateral damage would probably have made short work of it, by drawing the enemy out of its nest into a location where the marines can mantain their technological advantage and apply close air support.

They are a silicon-based life form. That gives them a really sturdy exoskeleton to resist harm.

Not only is their blood acidic, but they have also been shown to spit acid. A face hugger in the original Alien film was able to melt Kane’s faceplate in order to attach to his face, and the adult xenomorphs used spitting acid as a weapon to blind people in Alien 3 and Alien Resurrection.

Their reproduction also makes them dangerous. After emerging from a host body as a chest burster, the creature will grow to a full-sized adult very quickly. And they have a form of horizontal gene transfer as part of their ability to adapt to whatever environment they are born into, so that they can survive in the same condition that their host finds comfortable. (No need for terraforming, they alter themselves to live anywhere.) That means that individual creatures can show varying traits based on whatever was impregnated with a face hugger. In Alien 3 there were quadruped xenomorphs who had been born from either a dog or an ox (depending on whether you watch the theatrical release or director’s cut). In the Aliens vs Predator franchise, some of the xenomorphs took on physical traits from the “Yautja” (the alien hunter beings from the Predator films).

Were the aliens immune to bullets?

No. The aliens have very tough outer shells, so a pistol isn’t going to be very effective against one, but there are plenty of scenes in the movies of aliens getting shot to pieces with Colonial M41A pulse rifles.

If the Marines had stuck together, with guns pointed in all directions, they might have had a chance

Probably not. The aliens seemed to value hive preservation over individual preservation and have no problem sending in wave after wave of aliens to attack. Sure the Marines would destroy the first few waves of attacks, but at some point the Marines run out of ammo and the aliens win.

The Marines did try that sort of tactic, but they barricaded themselves in a part of the base that only had one way in and out so they didn’t need to defend in all directions. They didn’t think about the spaces in the ceilings and floors though. Oops. 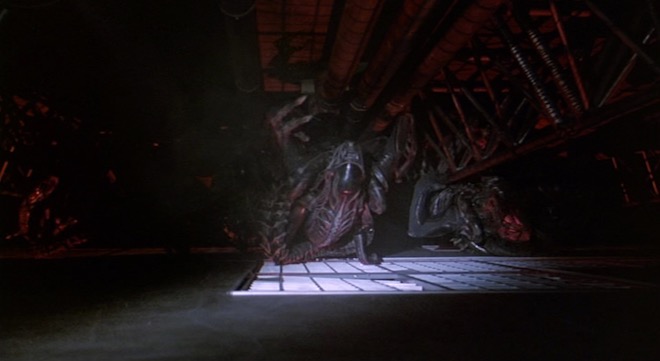 That’s a good question and, to me, their strength wasn’t consistent from the original and truly horrifying original movie on through the sequels. In the original movie, the predatory attributes of the alien gave the impression that killing it was nothing short of a miracle. It was lightning fast, totally quiet, extremely difficult to kill, and remorselessly ruthless. I remember the scene where it opened its jaws and began to EXTEND its inner jaw and teeth. I remember thinking, “Really?!”

In the sequels, I never got that same feeling of invincibility. I’m wondering if it is partly because of the fact that it was all new in the original but, “familiarity breeds contempt”, kicked in as each sequel was made.

In the first movie, they had limited make shift weapons.

They were far less invincible in the second as the Marines came with state of the art combat weapons. Please note the Colony apparently went down pretty easily.

The first movie is cosmic horror, the terror of the unknowable, with a side dish of sexual-assault subtext. The second movie is a Vietnam metaphor. Obviously one’s preferential mileage will vary.

In the sequels, I never got that same feeling of invincibility. I’m wondering if it is partly because of the fact that it was all new in the original but, “familiarity breeds contempt”, kicked in as each sequel was made.

A couple of thoughts. The original film was a horror movie, basically a sci fi slasher flick, with a seemingly invincible killer loose on the ship taking people out one by one like Jason Voorhees or Freddy Krueger. The subsequent films were more akin to action/adventure films, where instead you have an unstoppable protagonist who mows through enemies.

But to justify this from a plausibility perspective, the original film took place on the USCSS Nostromo, which was basically space faring tugboat. The crew was hauling freight, they weren’t really equipped to deal with a monster like this, especially one that they knew nothing about and were completely unprepared for. In Aliens, they put together a team of Marines specifically to fight the creatures. They were well-armed and trained for that mission. Obviously, things didn’t go as smoothly as they would have liked, but you can see that as humans learned about the creatures and developed better ways to counter them they were more difficult prey.

Also remember what I said before about the creatures pulling traits from whatever they are “born” from. Maybe Kane had especially good genes?

The OG Alien was a great horror/slasher flick. Aliens was a great action thriller with a horror touch, I think it’s the better movie in most regards and was a hell of a lot tougher to execute. It’s on the short list of “sequels that were better than the original”.

All in all, I think Cameron did a spectacular job in making the Aliens really freaking bad-ass without making them nigh invincible. The limitations that were put on the space marines to level the technological playing field were believable. The Xenomorphs were just smart enough to be super dangerous and unpredictable without being so smart that they make quick work of the marines. Similarly the space marines had a mission (both the official one and the secret one) which precluded them doing the smart thing…nuking the place from orbit.

To the OP, think about it this way. Imagine 2 hunters were stranded in the forest without semi-automatic weapons and being hunted by a big pack of rabid wolves who weren’t afraid of being shot, I don’t think the hunters would stand much of a chance. Same kind of vibe, when there are more bad guys than there is rate of fire and you don’t have clear sight lines things can go pear shaped in a hurry.

Note to future engineers: don’t make air ducts big enough for monsters to hide in. Or maybe just move the air through the hallways, which could be made bigger with the absence of air ducts.

Why look for logic when the movie never showed any sign of it?

“Ducts - Why is it always ducts?” - Sigourney Weaver, Galaxy Quest

Are you suggesting conventional weapons from lower than orbit?
Can you be sure that will work?

As both an ex Navy Electrician and ex Civilian HVAC mechanic, I can tell you that the ducts are pretty much needed but even when they are that big, there are turning vanes, dampers and chill water/heating units in the way. Also in non-Navy applications, the ducts would barely be able support Newts weight, never mind an adult or one of the Aliens.

You people have given this a lot of thought. Now tell me about the aliens in A Quiet Place.

“Ducts - Why is it always ducts?” - Sigourney Weaver

The alien strategy is to get all their ducts in a row, then attack.

The fact the air ducts were big enough to crawl through is what saved everyone’s lives. The aliens breeched their perimeter by moving through the ceiling plenum, which is more than big enough for people to move through in most buildings (if they’re sufficiently acrobatic).

Depends on the building, the ceiling plenum is a place like a hospital goes to the ceiling for fire protection. On a planet being terraformed I would expect the plenums to not interconnect.