The answer to packing the court

There seems an obsession with Joe Biden and Kamala Harris not wanting to answer the question: If you’re elected, will you pack the courts?

It seems stupid to me because no one is asking Republicans: Why do Republicans insist upon putting reactionary judges whose views do not reflect the experience of common Americans on the bench?

I told my brother I would think about it and see what I could come up with. I told him I would write something up that could be said in two minutes. Joe and Kamala speak slowly, but I don’t.

Here’s how I think The Dems should reply next time the issue comes up:

Will Biden-Harris “pack” the supreme court?

There is no such thing as “packing” the Supreme Court.

Mitch McConnell has said that if there is a President of one party and a Senate of the same party; if there are empty seats on the Supreme court, “Fill those seats!”

The way we put people on the Supreme Court is broken. The person who broke it is Mitch McConnell.

For the last ten years, only one person, Mitch McConnell, has decided whether a person – competent or incompetent, experienced or inexperienced – would have the right to get a vote by the Senate to become a member of the federal judiciary.

One person, Mitch McConnell, for the last ten years has decided whether a candidate for the federal judiciary would become a judge. Mitch McConnell. This is not what our founders intended.

Mitch McConnell does not require “advice and consent” of the Senate.

A system where Mitch McConnell alone can dictate whether a person becomes a judge, that system is broken.

Joe Biden doesn’t set the number of justices on the Court. Congress does that.

If Congress were to explore judicial reform and decide to expand the court, Joe would consider the recommendations of Congress.

In a Joe Biden Administration, if there are empty seats on the Court, or any federal court, Joe is going to take the “advice and consent” of the Senate.

Then, Joe Biden will fill those seats.

It’s all about balancing the court, not packing it, imo. Mitch has already done packed it. Right now the scales of justice are off-kilter in America. Congress and our next president need to balance the court.

The way we put people on the Supreme Court is broken. The person who broke it is Mitch McConnell.

Here is the one sentence you could get out before interrupting Trump jumps in and starts flinging feces. And the most important sound bite in your well reasoned position.

I do like the argument you make, but I believe Biden still has a small hope that ACB will not be confirmed by the election and electoral realities will give senators cover to withdraw from confirming her. In addition, I cannot fathom Joe Biden speaking of himself in third person except in the most humble manner possible. He is Joe Biden, not LeBron James (whom I also admire greatly).

I agree with you, T_N, Trump would be off the hook. But I think the more important place for Biden surrogates to speak is on the news networks. With a good, strong message that exposes the real bogeyman, Mitch McConnell, the message would get through.

You and I agree, McConnell is a hypocritical and evil presence in the Senate. I have posted multiple times that I now believe McConnell is Trump’s puppet master.

I suspect with all the Republicans who support Biden, he may know a few Republican Senators are reluctant to confirm another conservative justice for McConnell and Biden/Harris is avoiding the question because there is a genuine chance that ACB will not be confirmed. Biden says flat out he is trying to take a high road here and not create a new headline spectacle. I started a similar thread (that is now a discussion on alternative Democratic systems of government) and your view was what I was hoping to hear. I was not as complete in my suggestion in that thread as you are in this one.

All of that said, I was so amused by how I read your post that I composed the following. I hope you will forgive a little levity when I post the following.

I have to admit I am amused by the idea of Biden giving the following speech:

I know it wasn’t intended in that manner, but I love the idea of this speech being broadcast followed by a highlight reel of Biden dunking on McConnell and swatting McConnell shots back into his face.

Mitch McConnell alone decided that the Supreme Court could get by for more than a year with 8 justices. 9 is NOT the magic number.

I agree that this is a message the Dems need to hit, over and over again. (And your entire OP is right on target.)

It’s also the case, I agree, that Biden doesn’t want to say anything that could give anyone an excuse to confirm Barrett.

The press won’t stop hounding him because they know:

The fact that there are numerous serious topics on which Trump needs to be answering questions, but no one is asking him, is, of course, appalling. Few in the press will commit the time or energy to asking Trump or his surrogates questions, because they know they won’t get answers. But Democrats are a more attractive target, because Democrats feel bad about lying (and thus might say something newsworthy).

Biden may want to wait to see whether the court kills ACA, Roe, etc. before deciding whether to ask congress to balance the court. IOW, he will allow them to hang themselves.

‘If shutting down the census isn’t an argument for court packing, I don’t know what is.’

Wow, none of those cowards even put their name on it: 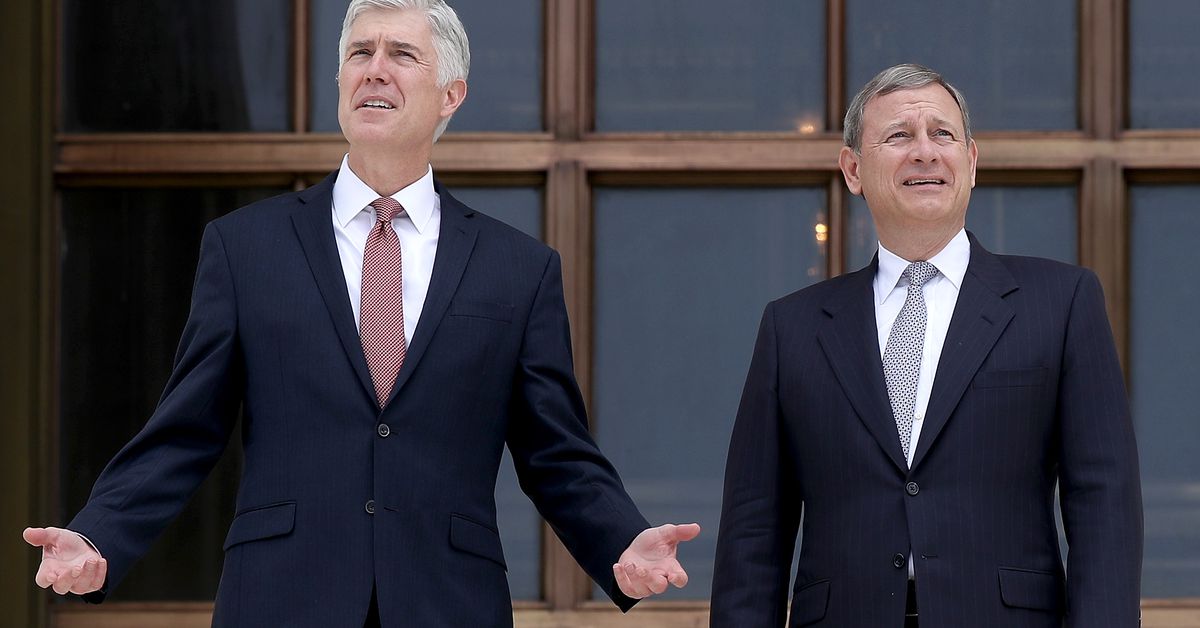 Biden may want to wait to see whether the court kills ACA, Roe, etc. before deciding whether to ask congress to balance the court. IOW, he will allow them to hang themselves.

That seems like a pretty risky way to handle the issue. The court has lifetime tenure and moves at a glacial pace, while the legislative portion (if any) of Biden’s presidency might only last two years. And given that expanding the court isn’t the most popular thing in the world, they’d be wise to do it early in an odd-numbered year so they could spend the rest of the time doing more electorally-beneficial things (one of the big mistakes with the Obamacare process was letting it drag on into 2010).

The decision on ACA will be made before June. If they abolish it (as I fully expect them to) the country might just get sufficiently angry to support court balancing (as I would call it).

At some point a decision was made that the constitution is not a suicide pact. Perhaps it was the one about yelling “fire” in a crowded theater.