The best government is that which governs least?

Seen and heard many times over the years, most recently today…but are there any real world examples to support this idea?

Wasn’t that one of the many really stupid or contradictory things Jefferson said?

The US or Australia come closest to this ideal as far as I know. Less government has worked fairly well to some degree for both. Though we have plenty of problems and warts.

The highest functioning governments seem to actually be socialist nations with low population density and plenty of natural resources. That seems like a lot of conditions required to work well.

I think the point is different governments can work well. The US sucks at safety netting its citizens but does allow a lot of social mobility.

There are loads of examples throughout history of governments that have done things that have made life worse for the people they governed.

One of my hopes is that someone who believes this to be true shows up to explain what they mean and perhaps give real world examples.

Those that believe the adage will say the country worked best with less government in this time.

I don’t think it is that simple. I think life gets more and more complicated as the population grows and travels time decreased. Also Smaller government seems to go hand in hand with leaving large part of the population out of the success of rest of it.

Those that believe the adage will say the country worked best with less government in this time.

And those same people will generally point to a time where the top tax rate was far higher, the draft was in effect, large parts of our population were oppressed by the government, the government prohibited certain forms of co-habitation, and the government was very involved in the reproduction rights of women.

But industries were free to pollute, didn’t have to provide a safe work environment, nor one free of harassment. And people were free to discriminate, and that’s all they care about.

I’m playing devil’s advocate here, but generally the free to discriminate wasn’t a big one. For many industrialist the pollution was a Commy Plot. The smarter ones would claim innovation was simpler and easier with less oversite.

All of these arguments though usually miss that the world has changed. World Commerce is a huge part of that. Population Growth is another huge part. Pollution can’t be ignored. Discrimination should be stopped.

Specifically on the Draft, to maintain the sort of military power we had chose, it wasn’t enlightenment that removed the need for draft, but technology. We can now project more power with far less people than in the past. The push back on the Draft though did help eliminate it sooner.

One of my hopes is that someone who believes this to be true shows up to explain what they mean and perhaps give real world examples.

Good luck waiting for that. The reality is that any modern government provides functions that cannot effectively be provided by commercial or philanthropic interests, including infrastructure, education, public health services, common defense and law enforcement, a court system, protection against monopolies and manipulative powerful interests, et cetera. The people who espouse the philosophy of the o.p. title also want these things, but without limitations on there personal enthusiasm, be it recreational drug use, unrestricted weapon ownership, unrestricted speeding on public roads, unregulated commerce, and so forth. Even the “sovereign citizen” contingent doesn’t actually want government to go away; they just want it to not disrupt their “personal freedoms”, which from what I can tell is mostly the freedom to be a raging asshole.

The notions that the US is an example of “governs the least” or is an ideal model of personal freedoms are risible. The US leads the world in both number of lawyers and number of incarcerated persons per capita, has one of the most complex and arbitrary systems of taxation in the developed world (in which despite whinging about how high their taxes are, the extreme rich have a lower tax rate than most nations with comparable or greater per capita GDP and frequently pay a realized tax rate that is a fraction of they owe), and is one of few developed nations where the government can seize personal assets without any due process whatsoever based on unspecified suspicions.

The US federal government is a sprawling entity, and while libertarians and conservative complain about the “nanny state” and welfare, by far the largest discretionary outlays are to corporations and government contractors, mostly in the form of defense spending has has consistently resulted in budgetary deficits since World War II but especially since the Reagan Administration which, despite Reagan’s mantra about the evils of large government, actually expanded the size and power of the federal government and used it to curtail the strength of labor unions. The US has been “ he top world power for 80 years” for better or worse precisely because of how large and involved he government is.

I personally think that government should be only as large as necessary and less intrusive into the personal lives of citizens consistent with preventing private interests also be limited in their intrusiveness in imposing their beliefs on others. As a start, we could end the War on Drugs, reduce the size and expenditures of the military to something comparable to our potential opponents, dismantle the government-supported for profit prison system, ensure transparency and market availability of medical care as a public benefit instead of a way to squeeze profit from people down to their last dime, and see that public education is available to all in equal measure without imposing arbitrary and meaningless test criteria, which are all things the supposed “small government” advocates either oppose or don’t consider to be important enough to argue for.

Over the last century, would you say government in the US has grown larger or smaller?

Then doesn’t the US demonstrate that the government that governs more, governs best?

When somebody uses “best” you always have to ask “best for whom?”

The late 19th century was a spectacular time of industrial growth and innovation and it was also a time when government put extremely few restrictions on businesses. People who want to replicate those times often put the Trust Era up as an example.

Neglecting to mention the equally spectacular abuses that resulted, the muckrakers exposing such rampant corruption, lack of safety, and deliberate neglect that Congress felt compelled to enforce ignored laws and pass new ones. And that the reason those laws weren’t enforced or never passed in the first place were because federal and state legislatures were owned down to the last toenail by business interests. The 20th century continued on this pathway over the decades-long fight to pass Progressive legislation and give unions rights.

Did you miss the part where I was playing Devil’s advocate before?
Gotcha games are the worst form of debate.

Debate often involves demonstrating weaknesses in an opponent’s logic. If you think that is a “gotcha game” I don’t think this forum is for you.

During the 1920s we had little government intrusion in the markets - and we wound up with the Great Depression as a result.
The squishiness of “best” has already been mentioned, but we also need to wonder what “least” means. It’s already admitted that no government is bad, so least must mean least which optimizes whatever is meant by best. So the phrase is pretty much nonsense. I doubt anyone thinks that government acts which return no value are good, so it’s an argument about what the value is.

Firstly, the quote is a total crock, though it might just be that what Jefferson meant isn’t what we interpret.

The US or Australia come closest to this ideal as far as I know.

You’d need to add the Kiwis in as well for starters and both Australia and New Zealand have an authoritarian undertone ie what the US might call the tyranny of the majority.

Firstly, the quote is a total crock, though it might just be that what Jefferson meant isn’t what we interpret.

Definitely not from Jefferson. It’s from 1837 and the full context can be found here.

And those same people will generally point to a time where the top tax rate was far higher, the draft was in effect, large parts of our population were oppressed by the government, the government prohibited certain forms of co-habitation, and the government was very involved in the reproduction rights of women.

Wildly incorrect. Any libertarian type is going to point to a time before the New Deal as an example of that phrase.

Speaking for myself, I view Calvin Coolidge as our last truly great president. Among other things, he said, “Collecting more taxes than is absolutely necessary is legalized robbery.” 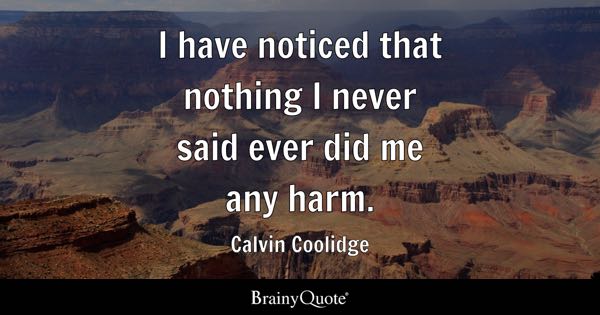 Speaking for myself, I view Calvin Coolidge as our last truly great president. Among other things, he said, “Collecting more taxes than is absolutely necessary is legalized robbery.”

Since we have been running annual deficits for almost 100 years, we are clearly not collecting enough taxes.

“Collecting more taxes than is absolutely necessary is legalized robbery.”

The quote, as I heard someplace, is a total crock. What is “absolutely necessary” is the part that everybody argues about, not the collecting taxes part. Just citing it tends to undermine any credibility your argument has.