The Bestselling Books of 2015

Publishers Weekly has published lists of the top 20 each bestselling fiction, nonfiction and juveniles in 2015 along with the number of copies printed: 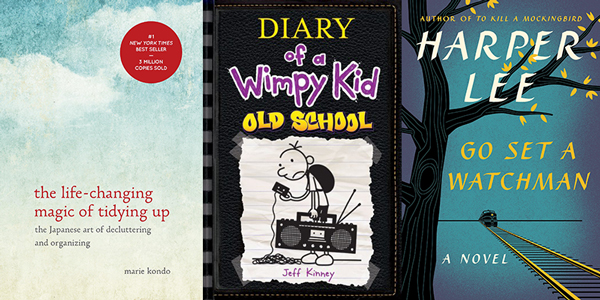 Harper Lee, Marie Kondo, and Jeff Kinney topped the print bestseller lists in 2015 for adult fiction, adult nonfiction, and juvenile books, respectively. Here are the 20 bestselling books of the year in each of those categories.

Here are the fiction books:

I was surprised Harper Lee did so well (a million and a half copies for the Watchman book); I thought she was the kind of classic author people read in literature classes and nowhere else. The only books I have read are The Great Gatsby and Fahrenheit 451–and those were decades ago. I started on The Girl in the Spider’s Web, but stopped after a couple chapters.

In nonfiction the bestselling book was The Life-Changing Magic of Tidying Up by Marie Kondo–I am surprised a book dealing with clutter would do so well.

Old School (Diary of a Wimpy Kid #10) by Jeff Kinney was the bestselling juvenile. Dr. Seuss still had several entries in this list.

Anyone see anything they recommend on any of the lists?