I’ve seen this mentioned once, but I must have missed the explanation. It seems nonsensical to me to borrow money after you spend it.

Sorry about that – it must have been in a different thread. (There are several touching on this topic!) Thanks to everyone else who has stepped up and shared better explanations than mine.

Good start, but perhaps for the next post you could try writing in full, coherent sentences?

Only after he refills his prescription…

Or maybe it’s like one of those game shows where one person lists things and the other player has to guess the category? Because I’m going with “Things The Right Blame Biden For Even Though They Struggle To Coherently Articulate Why”.

Because I’m a glutton for punishment I occasionally go comment on memes that my Trumpist relations post on Facebook and post factual information, which seems to infuriate a lot of people. The current one is a meme demanding that they “Re-open the Keystone Pipeline!!! Make this go viral”. The general consensus of commenters is that Biden has “closed” the pipeline (they seems to alternate between the Keystone and Keystone XL ones, or not being sure but whatever it is Biden did it) and this is why gas prices are high, and also America is no longer energy independent because of this.

tend not to be welcomed.

I mention this because

is on the list, even though Biden had virtually nothing to do with the increase. But when the operative syllogism is “Everything bad is Biden’s fault, high gas prices are bad, therefore high gas prices are Biden’s fault” and this viewpoint is validated by the right-wing media lying and lying and lying about it, I suppose it’s not surprising that people do blame Biden for this.

But I will at least concede that Joe Biden is responsible for the existence of his son. Not for any particular actions; just for, you know, Hunter Biden being.

But I will at least concede that Joe Biden is responsible for the existence of his son. Not for any particular actions; just for, you know, Hunter Biden being .

That’s what his first wife would want you to believe, any way (my sincere apologies, I’m certain the first Mrs. Biden was in fact a wonderful person and faithful to her vows). Which brings us to nature vs nurture (Hunter was about two when his mom died) and we can pull in Dr Jill as a co-villain.

The current one is a meme demanding that they “Re-open the Keystone Pipeline!!! Make this go viral”.

“Bring back the Keystone Cops!”

His skills are also in the shameless ruthlessness, that allows him to pretend with a straight face to be a conservative elder statesman…

But he doesn’t have a straight face - he has that infuriating Yertle the Turtle smirk. I hates it, I hates it so!

This is a new one to me

Let's Go Brandon refers to a viral video of NASCAR racer Brandon Brown speaking to NBC about winning the NASCAR Xfinity Series while the crowd chants "fuck Joe Biden," which the newscaster claims is a chant of "let's go Brandon" instead, seemingly as...

In early October people started using the phrase in place of “fuck Joe Biden” to criticize and joke about the President.

If you spend any time doomscrolling through the comments at your local news station’s Facebook page, you’ll find that the dipshits can’t get enough of the Let’s Go Brandon thing.

This is the peak of comedy in the world of the Trumpian sub-cretin.

It’s much the same thing as Republicans whining about all those “overpaid entertainers and athletes” whenever one suggests that maybe we shouldn’t, you know, be racist, but the second they find one that agrees with them it’s all “This person is a truth-telling hero! Everyone should listen to them!”.

Ix-nay on the oom-day– for now. Opinion | The media’s doomsday talk about Biden is greatly exaggerated

It's important not to lose perspective.

Many in the media are drumming up the narrative that President Biden is in deep political trouble. The Afghanistan withdrawal was a failure! Biden’s polling numbers have experienced an “ epic collapse ”! Some in the White House press corps are asking questions along the lines of “Isn’t the president worried he’s failing?”
…

Several things are clear regarding Biden’s future: First, tackling the coronavirus pandemic so that the economy can return to something akin to normal is fundamental. The good news is that the seven-day average for covid-19 cases is down roughly 12 percent with fewer hot spots. Second, if Biden gets a sizable reconciliation package, the bumpy negotiations will fade in significance; if he does not, he and his party will be in deep trouble. Third, Biden is in a holding pattern when it comes to messaging his package. While he waits for two Democratic holdouts, it is difficult for Democrats to remind the public that, unlike Republicans, they are for the little guy, for making work easier and for making scofflaws pay taxes.

Completing Biden’s essential task — passing his domestic agenda — is taking longer than the president would like.
…

Think of it as though Biden is playing a tied baseball game delayed by rain. It may be frustrating, but it’s far from time to make hyperbolic predictions.

Which is all fine from an analysis standpoint, but people’s “gut feelings” are rarely based on facts. Do most people on both sides feel that Biden is doing a good job? That’s the real fight. I’m relatively pessimistic about Bidens’ and the Democratic chances of doing well in the coming elections, and I hope that what I just wrote about people applies to me as well in this case (i.e. that I’m wrong despite my feelings), despite that I try to stay knowledgeable about politics.

Democrats almost always take a beating in midterms when one of their first-term Presidents is in office (see 1994, 2010). So far, I’m afraid the pattern doesn’t look like it’s going to change next year, but I’d be delighted to be proven wrong.

It’s infuriating knowing that this guy holds so much sway. The only thing going for him is at least he is honest about it unlike Sinema who never explains why she is holding up everyone else.

Neither of them are up for election until 2024 so either Dems add more seats to their majority in 2022 making these two senators irrelevant or Biden’s agenda is dead. 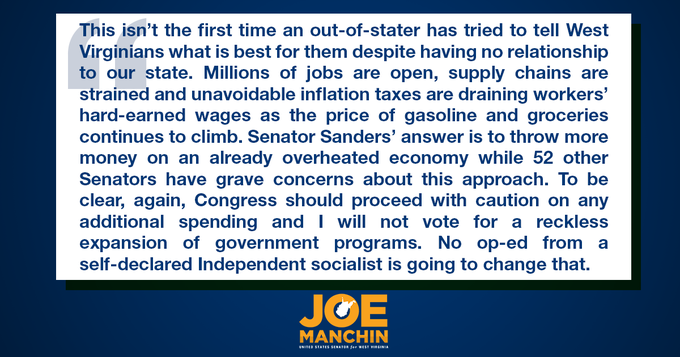 The best hope the Dems have is that Trump starts a bitter civil war within the GOP. Maybe he dies or has a stroke and the party begins fighting over who takes the mantra. Maybe he calls for his voters to boycott the elections and they listen. It could happen I guess.

Manchin is all about the $. He warns about creating an entitlement society - as he throws parties on his yacht.

Manchin is exactly right. The plan to spend another 4.7 trillion dollars of printed money on top of the 7 trillion recently printed and spent on COVID relief when there are already shortages of labor and material, and inflation is spiking is not just insane, but directly counter to the Democrat’s own Keynesian economic theory.

You would be much better off going into the midterms without these bills. If the economy sucks you can say that you had the answer but the perfidious Republicans stopped you from enacting them. And if the economy turns out okay and inflation fears recede, you’ll be in a lot better position to gain support then.

The best hope the Dems have is that Trump starts a bitter civil war within the GOP. Maybe he dies or has a stroke and the party begins fighting over who takes the mantra. Maybe he calls for his voters to boycott the elections and they listen.

What do you figure is the best hope the GOP has?

We disagree on the basic assumptions that differ between liberals and conservatives on spending and taxes.

We already know this. Why are you bothering with this again?