The geometry of toilet paper rolls

I’m putting this here because there ought to be a factual answer (i.e. yes there is such a formula and here it is, or no there isn’t).

Imagine a perfect toilet paper roll, perfectly cylindrical (except for the last piece on the outside, but let’s forget that if we can), and the layers of TP are all the same thickness and have the same microscopic distance between them. So you have a roll radius of X, and a cardboard center roll with a radius of C, and so the radial depth of the toilet paper is X - C. For the purposes of this exercise, the number of TP squares on the roll is 10,000.

What I want to know is, what should the radial depth of the toilet paper be when the number of remaining squares is 5,000 (i.e. half of the original). Remember, no real-world issues apply here, every square of TP is just like every other square, and nothing changes with the remaining squares as outer squares are removed.

I only know the answer isn’t a simple (X - C) / 2, because an outer layer will have more squares than an inner layer, even when they have the same thickness. Beyond that I have no idea how to solve this problem; hell, I don’t even know what branch of math to bring to bear on it.

Here’s a calculator for you.

Just plugging in some numbers, with each sheet being 1 inch and they being 1 mm apart with a 1 inch hole, I get 22.4 inches in diameter.

It’s probably an approximation, but I guess it’s a good one: If you look at the toilet paper roll from the side, you will see that it forms a roughly circular ring. The surface area of that ring can be calculated as (R-r)²*pi, where r is the radius of the cardboard spool in the centre and R that of the overall roll (cardboard spool plus toilet paper wrapped around it). So the surface area is proportional to the square of the thickness of the rolled-up paper. I would therefore assume that the thickness of the rolled-up paper, if only half of the initial roll is left, would be 1/(sq rt 2) of the thickness of the initial roll.

I think @Schnitte was on the right track, but he typoed the formula.

Since the above areas are half

Here’s a calculator for you.

Just plugging in some numbers, with each sheet being 1 inch and they being 1 mm apart with a 1 inch hole, I get 22.4 inches in diameter.

Thank you, this is what I was hoping for. Instead of number of sheets I went with a total length of material. So I put in 500 feet of material of 0.1 mm thickness, and a center hole of one inch, I get a radius of 2.787315 inches, and with 250 feet I get a radius of 2.00234 inches, or about 72%. That percentage of the before and after radius of the toilet paper changes depending on how many feet I start with.

No matter what numbers I put in, I can’t get it to come out that the area, when half the material is gone, is half of the original area, whether I include the center hole or not.

I have not verified the formulas but using volume as a surrogate for the number of sheets is a better generalized solution than trying to count sheets and consider space between layers, yada yada. If you assume that the density is uniform than calculating the radius when the volume is 50% will work for any similar problem, whether it is toilet paper or a tube of solid steel.

Archimedes could have answered this problem. He would have known right off the bat that it went like R^2-r^2. Smart guy Archimedes.

Well, yes, I don’t think it’s a remarkable statement that the greatest physicist in history could answer a particular question.

We buy specially cut rolls of paper for our large format printer. We wanted the thickest roll that would fit on the spindle to reduce time wasted changing paper and wastage on the last (incomplete) poster. Our paper supplier (who creates our rolls from a really giant roll at their facility) apparently did not have the math necessary to figure this out and just kept increasing the size by 25 linear feet until we said “Stop! Too big!”.

No matter what numbers I put in, I can’t get it to come out that the area, when half the material is gone, is half of the original area, whether I include the center hole or not.

There won’t an example in which this is true. Since the diameter is increasing with every wind, obviously the second half will need fewer winds than the first half.

Diameter is also a one dimensional number. You are not measuring the area, which would be in square inches.

You might be thinking about the volume, however. You could start by winding half the paper on the roll and measuring its diameter when half the sheets are used. You would then start again using a center equal to the roll plus the first half’s diameter and wind up the rest of the paper. You now have two partially hollow cylinders. The formula for the volume of a hollow cylinder is V=π*h(r12−r22]). Subtract the first half result from the second half result and you’ll get the difference in volumes in cubic inches.

Calculating the remaining length of yard goods was an important function in the industrial age. Before instruments were invented clerks had to unwind the roll to figure out the length for inventory. Rufus Putnam solved this problem with his 1896 patent for the Putnam Cloth Measure. A wooden device with a complex series of numbers that were nicely engraved on the surface. In 1907 he came out with the Improved Cloth Measure which was a nickel plated brass caliper with charts on internal scrolls. Finally he invented the Wonder Cloth Measure made of Bakelite. On this tool you pulled out a spring wound tape to measure the diameter and scroll shaped cams did the math with a direct dial readout.

All the devices were used by measuring the diameter of the roll and counting the layers by clicking a thick needle across the layers to assist in counting the number of layers remaining. Using either the charts or the dial you could easily figure the length of the yard goods. The instruments were made in various calibrations for cloth, linoleum or carpet. Here are some from my measuring tool collection. Edit: Looks like you have to click on “album” to see the images. 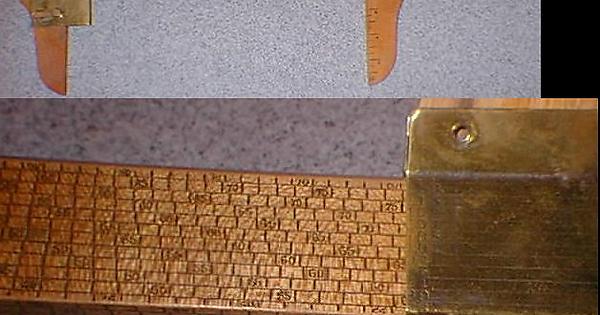 The length of paper on the roll can be reasonably approximated by treating each layer as a cylinder and adding the circumferences of each to find the total length. A more accurate measure would be to integrate the arc-length as a function of the angle the center core rotates through as the paper is wound onto the roll, treating the radius as a continuous function of the angle a, r(a) = ta/(2pi) where t is the thickness of the paper, but then we’d by dealing with total angles “wound” to get a given length of paper.

and the final radius is C + nt

The OP asks for the radius of the roll when half the paper is gone, which is equivalent to asking how many layers m give us a total length of L/2, or

but trying to solve this for m in terms of the original n leads me to a rather messy quadratic equation that I’m not going to try to reproduce here. If anyone want to take this approach further, I assigned the factor a such that m = an and substituted this into the L/2 equation, then multiplied it by 2 and subtracted the equation for L above to produce a quadratic equation in terms of a, but it’s not pretty.

Missed the edit time-out, I realize that I have used the variable a for two different things, the angle the center core rotates through as the paper is wound onto the roll, and then as the factor relating the initial number of layers n to the number of layers m left once half of the roll is gone. I should have used x, so m = xn, and then the resulting quadratic equation would be in terms of x. It’s still not pretty, but at least it’s more familiar.