My only point being using a bar on an open chord and fiddling with it doesn’t require the kind of practice and strengthening a beginner guitarist needs to accomplish.

You’re forgetting about the right hand. You need to learn finger picking, while a beginner guitarist can just strum.*

*Yes, you can play a steel with a pick (which is what I do) but it kind of defeats the purpose and sounds pretty lame.

He also mentions that Freddie Tavares played the part, who surely did play pedal steel. But the pedals aren’t necessary to play that part.

According to that guy: “Sounds impressive until you realize that a monkey could play the steel part. This is a great gig: you just make a silly noise then sit around and watch cartoons.”

If it’s tuned to any chord you can get some good stuff out of it. But I’m not talking about having control over the thing or articulating changes.

I did not know that. What about Jerrys solo on teach your children?

According to that guy: “Sounds impressive until you realize that a monkey could play the steel part. This is a great gig: you just make a silly noise then sit around and watch cartoons.”

Hehehe, yes. That slide was one of the first things I learned on the pedal steel. Pick a major chord (C to reproduce the original, IIRC), and slide up.

ETA: And he’s not saying the slide part sounds impressive, it’s that he can claim being a soloist with the LA Philharmonic from just doing that slide.

ETA2: And to correct myself, he says he used A9 and dropped the F#'s in that tuning to E.

If it’s tuned to any chord you can get some good stuff out of it. But I’m not talking about having control over the thing or articulating changes.

Well, yeah, but as @jaycat mentions, it’s not normally a strum. For it to not sound like very dense jazz, you’re going to have to fingerpick to get a “normal” sounding major or minor chord on a normal pedal steel tuning. Even on a normal console steel tuning, you’re usually not able to do a full strum for a normal major chord. You could strum on one that’s just tuned to a major chord, as long as you were willing to only play major chords before getting into slant bar techniques. Most of them aren’t tuned that way, though.

ETA: And he’s not saying the slide part sounds impressive, it’s that he can claim being a soloist with the LA Philharmonic from just doing that slide.

I think he’s saying a monkey could play the first chord of the theme, IE it’s easy to play it.

I don’t think you need a strum necessarily. What about soloing? That’s what I think is easy. Rhythm guitar on the steel must be a developed skill.

I think he’s saying a monkey could play the first chord of the theme, IE it’s easy to play it.

Yes, he’s saying that easy part was his ticket to being a soloist at the LA Philharmonic. Just clarifying the “Sounds impressive” part of it. That part is not much of a solo.

I don’t think you need a strum necessarily. What about soloing? That’s what I think is easy. Rhythm guitar on the steel must be a developed skill.

Well, you don’t need to strum, but most people do want to do chordal work eventually. If you’re just going to solo on a console or lap steel, it does remove the necessity having to learn to fret a string (much less fretting a string on the student instruments of yesteryear). But you do have to learn how to mute the unwanted strings.

Word to the wise:

I sold 2 guitars to Guitar Center. They said come on down and I did. So after all that, giving htem a price, having them come close, agreeing, signing, and giving them ID, and pulling down mask for a photo, They said they don’t write checks anymore. You have to take a debit card.

It felt weird. I should have just run. Anyway I tried to buy a guitar on Reverb today and after endless BS, and phone calls, the debit card is only good for w/d of $500 per day, and cannot be attached to paypal, or any other service.

Look out. I will never do that again. Like all the other things that wont ever happen again anyway and wont matter. Just another one for the list.

It looks to have an expiration date on it too, which for someone who got it in payment for a non perishable material good is pretty freakin insulting.

Turns out their bankruptcy is just another rationale for screwing you, not giving you any kind of deal.

Wow, that is a supreme bummer. Can you transfer the value out to more flexible storage (like your bank account) at the rate of $500 a day? I stopped shopping at Guitar Center/Musician’s Friend awhile back unless they had an unbelievable deal, they had the only one available, or I needed the item immediately for a show. You add yet another reason to generally avoid the place unless you need them.

BTW, if you have a Music Go Round near you, I would recommend them. It’s basically a franchise system for used music gear. IIRC, they pay 60% of market value like GC does. I don’t sell stuff often (I’m kind of a musical instrument hoarder), but if I don’t want to deal with the hassle of selling it to a person, I go to my local Music Go Round.

My personal victory over GC was ordering a Danelectro French Toast fuzz (copy of a Foxx Tone Machine). They had it listed on their website at the original list price of about $40, and I thought “Damn, I’m almost certain that’s been discontinued for years. Oh well, I’ve got a gift card from Christmas, let’s see if they actually have one.” So, I ordered it with some other stuff. Sure enough, the other stuff was delivered in about a week, but the French Toast was on backorder. I really wondered if I’d get the pedal or get some kind of refund. I’m not really willing to search my email to get exact dates, but several months later I got a notification that my pedal was on its way and I received a sealed box with all the original docs. I really do wonder what process took three months to track that pedal down in their inventory system.

Dang, that almost sounds like an endorsement of the place. It’s not. Seriously, they had it listed for sale and in stock on their website, and it took them three months to deliver. But they did deliver at the advertised price. I’ve since bought more expensive Foxx Tone Machine clones from Danelectro (the current owner was the creator of the Tone Machine). The others have their charms, but that plastic bodied cheapo is still the king of 'em.

Well, I’ve pretty much decided on buying that pedal steel. If it’s as advertised, it’s my dream boyfriend. I would have bought it already, but pedal steel folks seem to do stuff the old school way. No web storefront or anything, we’ll do a call. But he’s out of the office until a week from today. The masochist in me kind of loves the torture of waiting to call him and talk to him to get the sale settled. Hopefully the chase is not better than the catch.

On the other side of slide guitar being easier than using the frets - while looking at the website for MSA Micro, the manufacturer of that pedal steel, I found this video. It answers the question, “How can we make the Spanish style guitar way more complicated than it already is?” The answer is to add a change pedal for every string, of course. It’s kind of like a Parsons-White b-bender gone mad and attached to pedals, and you can no longer run around the stage. You’re stuck there in your chair, like a common drummer or pedal steel player who isn’t Robert Randolph. I still kind of want one, though. Unlike the pedal steel, I have no idea how I would operate it. It’s too weird. 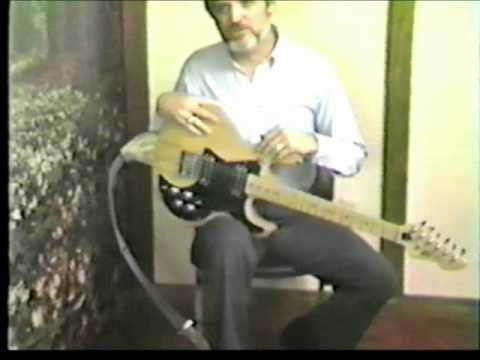 Can you transfer the value out to more flexible storage (like your bank account) at the rate of $500 a day? I

The 1 year expiration date on this card is something I will never forget or forgive.

How much fun were pedal steels to tune in the days before Snark- type tuners?

Heheh, I tune mine with a Boss TU-3 that is from before when Snark style tuners got popular, but I get your meaning. I can’t imagine sitting there in the early 70’s before Korg came around, using a tuning fork or pitch pipe and trying to tune a double 12 string. You’ll have to tune all 24 strings, and their raises and lowers.

Yeah, that would have made me give up the instrument pretty fast.

I just ordered one! White and black. On another site I saw a guy playing one side by side with a 63 Tele. I couldn’t tell the difference. Can’t wait for Friday, I’m going to learn some Merle Haggard before it comes. Working Man Blues. Maybe some Springsteen

How much did you pay for that if you don’t mind me asking? I know I could just look it up but I like to guess and I have a middle of the road Fender Tele. I really like that blonde color, mine’s a flame blue top with a black pickguard with white outlines on it. It’s my least expensive electric yet it’s what I mostly play anymore. My Les Paul costed four times as much and it’s used four times as less.

Wow, that sounds tres cool, Scabpicker. For those watching at home, this is boo-teak stuff: The Amp pedal/amp is $699, the stand-alone reverb is $1099. Which seems totally fair, this looks like good custom stuff from a small maker. Milkman site is here. I’m pretty impressed that The Amp’s simulated (well, non-spring) reverb/trem is so good sounding; I’ve heard a bunch that claimed to be good and just weren’t in person, this might hold up. And I’m sure the stand-alone totally does, it’s the real deal (though I’m a little surprised it’s not set up to run in an effects loop).

Surprisingly this isn’t the first time Milkman has been mentioned on this board.

Holy crap that’s a lot of money for a pedal, haha! I’ve acquired a Wampler Latitude trem that works great and I like my Fender MTG LA pedal, that’s got a preamp tube in it.

But I’m receding more and more into playing acoustic as I listen to more and more Billy Strings. Man I love that cat’s songs. I don’t even understand why. Probably all the trope-busting and genre-twisting he does with bluegrass, because…I didn’t think I like bluegrass, but apparently I do.

I thought this was kinda cool: I was watching a little documentarty about the making of Stones’ Satisfaction. There is a point at which you can hear Keith click the footswitch on his fuzztone. 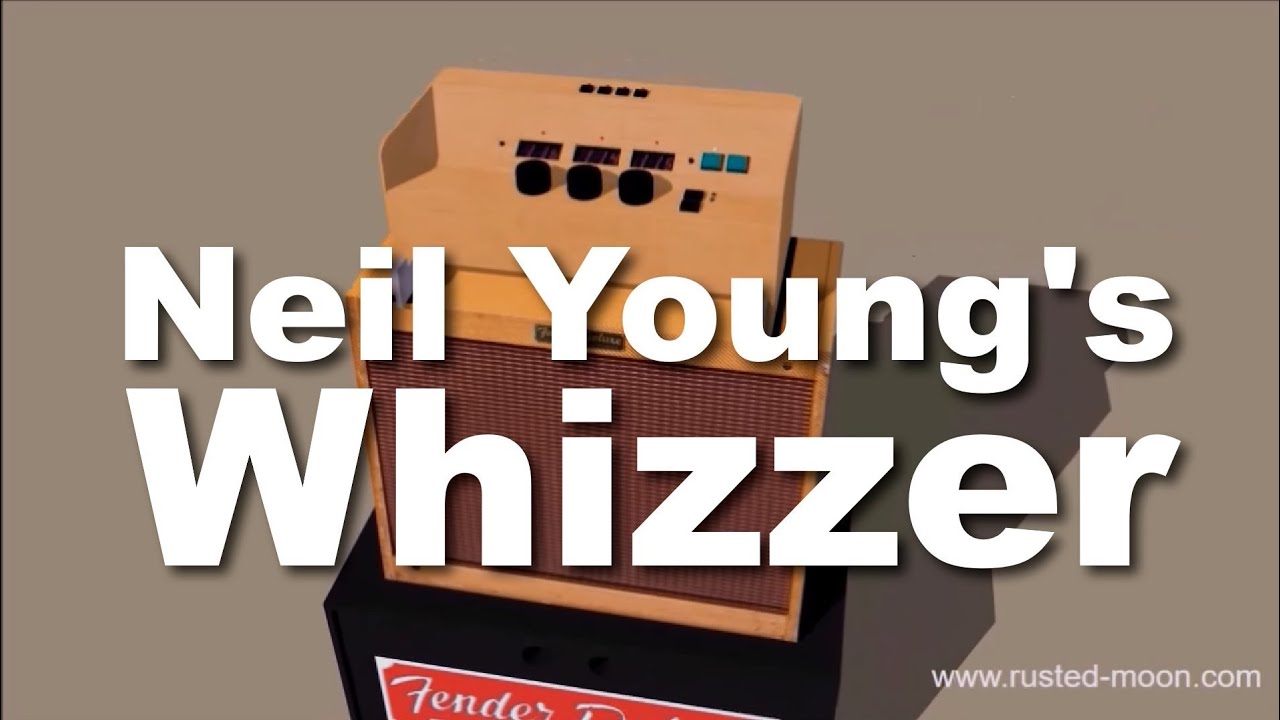 What technique does Willy Nelson use that results in a hole being worn right under the strings? I can understand holes in the regular pick guard location.

It seems like it’s most likely caused by him resting his fingers there, from pics like this: 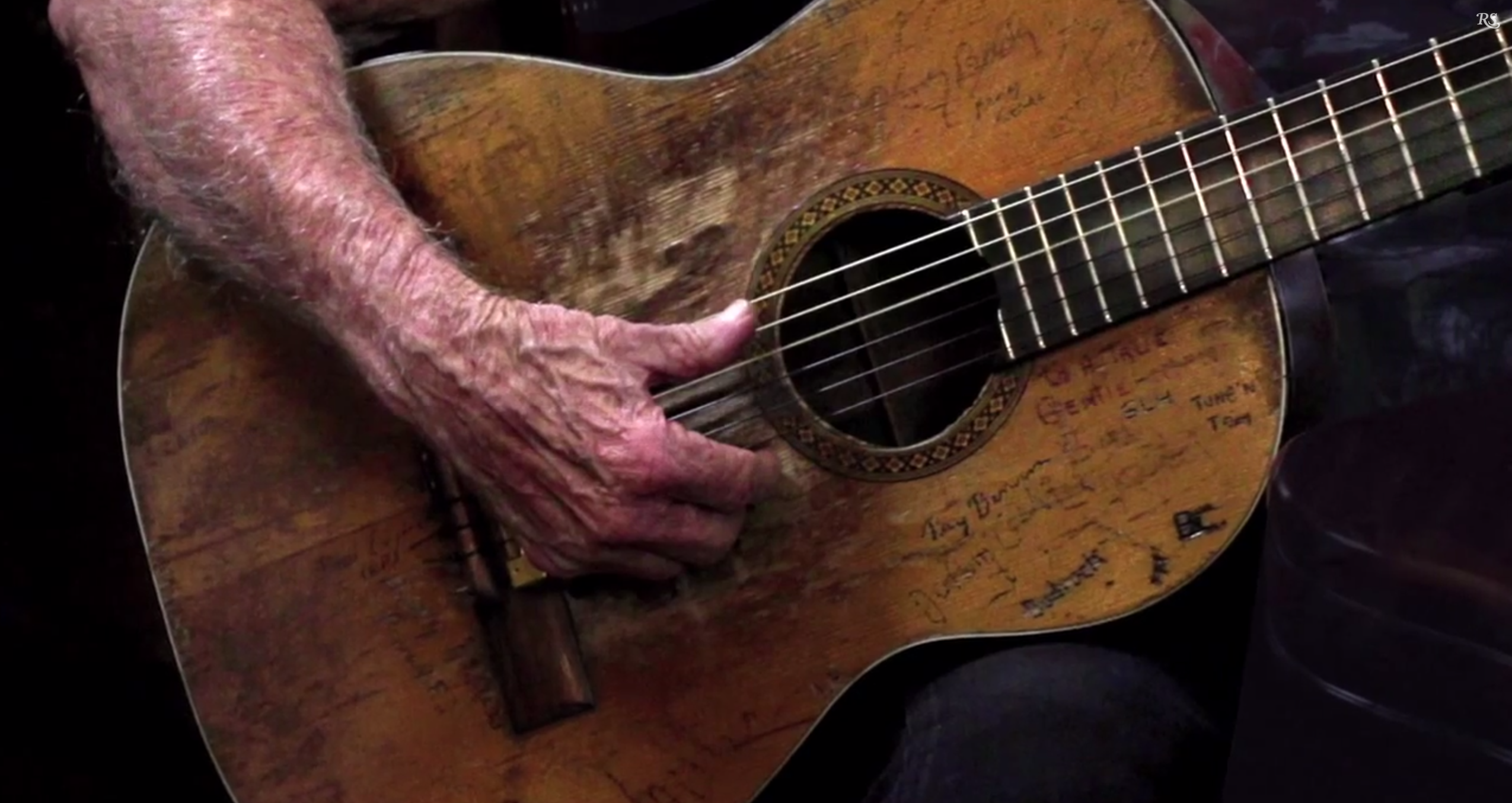 It’s got a spruce top, which is a softwood. So it doesn’t take too much to wear into it.

And he’s been sweating on it and playing it for over 50 years now.

Apparently thc isn’t the wood preservative I thought it was.