The Humbugs of the World by P. T. Barnum. It's a great read.

This is a great book. It is full of people and events that were perpetrated by humbugs. It could be written about people today, our government and the internet. The stories will let you know how to spot when your being had.

One section I enjoyed was about Grizzly Adams. He’s nothing like the show. This shows what the guy had for pluck.

During our conversation, Grizzly Adams took off his cap, and showed me
the top of his head. His skull was literally broken in. It had on
various occasions been struck by the fearful paws of his grizzly
students; and the last blow, from the bear called “General Fremont,” had
laid open his brain, so that its workings were plainly visible. I
remarked that I thought that was a dangerous wound, and might possibly
prove fatal.

You’ll note how the scams of the past are the same ones on the internet with almost no need to adjust them.

The sections about humbugs in speculation fit so well especially today. The tulip wars and the way the USA housing speculation is going is so similar. Before that you have some other good examples in the past that brought countries to there knees.

He covers the humbugs of spiritualism, voodoo, and witchcraft. In fact he gives you magic charms and spells from the day and tells you to try and get them to work.

He covers governmental humbugs, and how they abuse their office, mostly to make a buck off you…

Always popular are the ways your consumables are adulterated. He lists specifically what was being done to certain foods.

P.T. Barnum wasn’t against a person making a buck. He was against people not giving you equitable return for that buck. 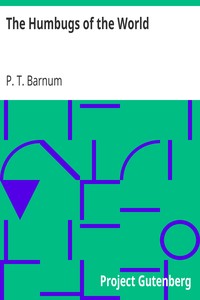 The Humbugs of the World by P. T. Barnum

Thanks for the link. I’m always looking for good ebooks.

I’m glad to hear you’re giving it a read. I hope you like most of it too.

Thanks for the link. I read public domain books on my iPod Touch via the free TextReader app. This sounds like an excellent resource from the world’s foremost authority on human gullibility.

Some correspondents ask me if I believe that all pretensions to intercourse with departed spirits are impositions [deceptions]. I reply, that if people declare that they privately communicate with or are influenced to write or speak by invisible spirits, I cannot prove that they are deceived or are attempting to deceive me—although I believe that one or the other of these propositions is true. But when they pretend to give me communications from departed spirits, to tie or untie ropes—to read sealed letters, or to answer test-questions through spiritual agencies, I pronounce all such pretensions ridiculous impositions, and I stand ready at any time to prove them so, or to forfeit five hundred dollars, whenever these pretended mediums will succeed in producing their “wonderful manifestations” in a room of my selecting, and with apparatus of my providing; they not being permitted to handle the sealed letters or folded ballots which they are to answer, nor to make conditions in regard to the manner of rope tying, etc. If they can answer my test-questions relevantly and truly, without touching the envelopes in which they are sealed—or even when given to them by my word of mouth, I will hand over the $500. If they can cause invisible agencies to perform in open daylight many of the things which they pretend to accomplish by spirits in the dark, I will promptly pay $500 for the sight. In the mean time, I think I can reasonably account for and explain all pretended spiritual gymnastic performances—throwings of hair-brushes—dancing pianos—spirit-rapping—table-tipping—playing of musical instruments, and flying through the air (in the dark,) and a thousand other “wonderful manifestations” which, like most of the performances of modern “magicians,” are “passing strange” until explained, and then they are as flat as dish-water. Dr. Von Vleck publicly produces all of these pretended “manifestations” in open daylight, without claiming spiritual aid.

It’s brilliant, and I keep being amazed that we keep running into the same scams today. Well, not amazed. Saddened?

I just finished it. It took me a while, as this was the book I’d read when I was without another book or magazine. Great read! The standard-for-the-time racism was disturbing, and the parts where he called all religions except his particular brand of Christianity “humbug” were disappointing - but he was a man of his time, even a fairly enlightened one.

The Dutch tulip mania was nothing short of astonishing, and he was the first person to really clearly explain stock “shorting” - as he presented it as the gambling it is.

Not sure I get it, especially the part quoted about Grizzly Adams. Am I just dense?

No, you are just modern. Barnum was proto-modern (a case could be made that he invented Modern America), so he was understandably (to us) taken aback that Adams was hiding a gaping hole in his head under his hat. Adams was more of a New Caveman so he shrugged it off as something that was likely to kill him but hadn’t yet and, aw hell, the bear hadn’t meant to hurt him. And it took a lot longer to kill him (IIRC, a couple months and he was up and around and showing his critters for much of it) than you or I would expect an untreated wound that exposed the brain to kill him (somewhere between instantly and the next day). Dude had a helluva constitution.

ETA: Or Barnum exaggerated the extent of the injury. He usually didn’t outright lie, but he was known to stretch the truth for effect some. But I suspect he didn’t here and that Adams was just a tough old coot with antibodies for just about everything clogging his bloodstream.

So he borders on absurdist? What’s the connection to scamming?

There isn’t any that I noticed. I think Barnum had a story he wanted to tell and stuck it in as an example of a great showman who was NOT a humbug. Or because he was being paid by the word.

Well, he did scam Barnum out of the suit…

Here I thought the thread was dead.

I’m glad some people finished it and liked it. The religious attack section was annoying, but I just finally skipped to the end of that. The racist stuff is unfortunately something you have to wade through in older books, which I can’t always do. The rest of the book was great at showing scams that are present today. It also showed the source of some phrases I’d not known. The good material in the book far outweighed the bad points of the text.