The "Just Offscreen" issue in Movies (BTTF as an example)

If the audience can’t see something, we tend to assume that it’s not there - or that the characters can’t see it either, and once you start noticing this, it makes a lot of movies inadvertently funny, as characters get surprised by things that the audience couldn’t see, but should have been obvious to the characters (example: Sam Beckett in “Quantum Leap” leaps into someone who is apparently a surgeon in the midst of an operation - but though the audience can’t tell, it should have been obvious to Sam that he was on a soundstage, because he must have been able to see the cameras).

Last night, I caught the end of Back to the Future, and noticed a great example - Marty watches himself make his jump into the past, and sees the terrorists crash slowly into the photo booth. Marty then runs down to see if Doc is still alive, and has a lengthy scene with him, and I’m thinking all the while that just a few yards away, the terrorists are still there, slightly injured perhaps, but still heavily armed in a van that is probably still driveable - but they’re offscreen, and so have disappeared from the universe as far as the movie is concerned.

Yes, this bugs me, although I can’t think of any examples. It’s related to another phenomenon I like to call " …and, scene," in which a character asks another character a question, which will have a revealing or dramatic answer, but the scene just ends there, and we the audience don’t get to hear the answer. Sometimes, the show or movie even treats it as if the answer was never given to anyone. Maybe this is essentially the same thing. The answer would take place off screen, so it never happened and it won’t be acknowledged, nor the awkwardness that would have been caused by refusing to answer.

The BTTF issue could have been resolved by having the Libyans get into a far worse wreck (like rolling over their VW bus) that would have put them out of commission. But that might have been too intense for a family movie (admittedly, a family movie where the protagonist makes out with his own mother at one point).

The Simpsons had an episode that made a reference to this sort of thing. In “Whacking Day”, Principal Skinner locks up Bart, Nelson, Jimbo, Dolph and Kearney while Superintendent Chalmers is visiting. Bart escapes to ostensibly free the others, but gets sidetracked by the main plot of the episode. At the end of the episode, Skinner realizes that the bullies are still locked up in the basement.

Tv Tropes calls it “Behind the Black”. Tons of good examples there.

But that might have been too intense for a family movie (admittedly, a family movie where the protagonist makes out with his own mother at one point). -

At that point, she wasn’t his mother. Yet. I liked that little touch where their actual relationship echoed backwards from the future.

Looks like I borrowed the Quantum Leap example from there.

Another example I just thought of: A Piece of the Action. Kirk and Spock are about to be killed by the gangsters, and begs permission to call the ship to say goodbye. Cut to extreme closeup of Kirk, ordering stunning of the gangster’s men outside the building - where did the gangsters inside the room, mere feet away from Kirk, and intending to kill him, go? They’re not on screen, so when Kirk goes offscript, he’s in no danger from machinegun fire.

At that point, she wasn’t his mother.

At that point, she wasn’t his mother.

At that point in the timeline, she’s not his mother. Her future self is.

As Douglas Adams observed, English is not equipped to handle time travel.

At that point in the timeline, she’s not his mother.

At that point in time, she is a first-degree relative of his. Genetics don’t lie.

The BTTF example is a great one. Not only are the Libyans still there off-camera, but they’re still there, in universe. Even if say they got knocked out, so they couldn’t go after Doc right away, they’re still pissed and want their bomb. And they know where Doc lives. They aren’t just going to give up.

The BTTF example is a great one. Not only are the Libyans still there off-camera, but they’re still there, in universe. Even if say they got knocked out, so they couldn’t go after Doc right away, they’re still pissed and want their bomb. And they know where Doc lives. They aren’t just going to give up.

This clip Back to the Future/Best scene/Robert Zemeckis/Christopher Lloyd/Michael J. Fox - YouTube gives an idea of just how close the photo lab and Doc’s van are - the terrorists can probably see Doc is still alive.

The man can invent a time machine; I’d think he could also invent a better bulletproof vest.

This one has bothered me since I was a kid – This Island Earth, at the point just shy of 53 minutes in. How could you not notice a big-foreheaded Metalunan walking up to your hijacked plane? Especially when you’re looking for thing? 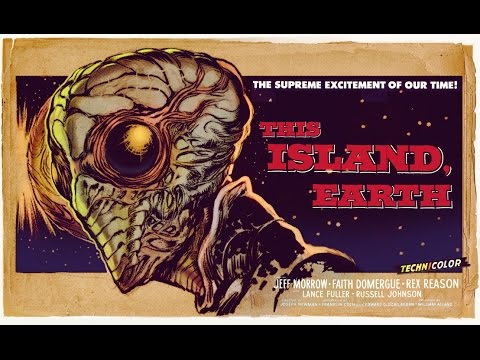 And he’s in the direction you were just looking a few moments before.

My favorite is at the end of GoldenEye. Bond and Natalya have foiled the villain’s scheme, destroyed his lair, and are lying in a field all alone. Then Bond’s CIA contact shows up and summons the Marines, who pop up out of foxholes and descend into the scene in two helicopters. The helicopters were hidden by being off the edge of the screen.

Now that’s a good point. It would still be a 1985 bulletproof vest - just a much more advanced one than was available to anyone but the Doc (who after all had all the motivation in the world to create a one-of-a-kind vest by a particular date).

Doc hadn’t gone to the future yet

Once you acknowledge time travel, you have to ignore plot holes like this. Future Doc could have delivered any gear needed from any timeline required at literally any point in time.

True, but there’s no evidence that he did so - even as he’s explaining to Marty why he was wearing a vest, while there is evidence that he’s a genius who can invent stuff he really needs.

Agreed. At some time after surviving the shooting, Doc may have realized that a 1985 vest did not offer sufficient protection. Then he could travel into the future, get a state-of-the-art kevlar vest, disguise it to look like one from 1985, travel back to 1985, and substitute that new vest for the one he used on the night he met Marty at Lone Pine Mall.