The metric system: Make your case for it and why we should switch to it. (As if we haven't already)

ETA a 3 L bottle is a “Texas Mickey”, according to some. No idea about your 2-litre bottle…

Base unit in Canada is the mickey of liquor: a hip flask, 12 fl oz.

Good to see that you all are still fighting for freedom up there.

But surely the bottles are not measured in ounces from the liquor store?

As I say, the base unit is the mickey. It converts to both SI and Imperial. Doesn’t matter what unit the liquor store uses.

When you are at your local liquor store, the bottle is labeled “one mickey”?

ETA: I see you addressed that. What are they labeled at the store?

mls and litres. But who bothers checking? Any Saskatchewan farm boy knows what a mickey of rye looks like.

Right, but to get back to the point of the thread, has Canada been held down in world progress as others seem to think because you refer to quantities of liquor in “Mickeys” (which I never heard of before this thread). Do any metric folk want to come down harsh on Canadian people for this the same way they do the US?

I’ve never heard of a metric guy turning down a sip from a mickey.

Pretty much sums it up - it’s conformity with an international standard.

Well, many of them are communist vodka drinkers.

But down here, a “mickey” is a date rape drug…someone might “slip her a mickey” a pill in her drink in order to make her incoherent and pass out… definitely not something we would say.

I don’t disagree that great nations shouldn’t just rest on their laurels, but I don’t understand how me buying meat by the pound at the grocery store is doing such a thing. If there was a convincing argument that the US would be better off in the world if you forced me and the grocer to sell meat by the kg, or for me to think in degrees Celsius, then I would probably go along with it.

Advantages to the metric system are listed by Chronos in Post 95. Are any of them game changers? No. If the benefits were that high, we would have done it already.

Substantive transition costs aren’t especially high either, not including annoyance (which counts for something!) But part of the idea of continuous process improvement is you take modest net benefits where they exist. Much of progress is incremental.

China sent out its ships and explored India before the Europeans did. But then the Emperor decided that the Middle Kingdom was so awesome, that foreign influences could only do it harm. So he banned international travel, on pain of death. That was great for European powers: imagine how history would have played out if the Portugese rounded the Cape of Good Hope, and ran into the Chinese Civilization. Instead Europe found no great powers to limit their trade expansion.

Again though, the stakes in this thread are orders of magnitude lower. I’m discussing my stances and biases more than anything else. Still, we’re creatures of habit, and the US has a habit of pandering to its ornery tendencies. I mean it’s not like learning the metric system is especially mind-taxing - it’s just an annoyance that most Americans don’t want to deal with. All nations are partly ornery/populist, but I guess this era’s top dog believes it can afford a little inefficiency in production.

If you want to see the kind of confusion that went before, according to @Northern_Piper , a Texas mickey is about 3L now, 100 oz or just a tad more. If we go back in time just a little, though, I found this photo 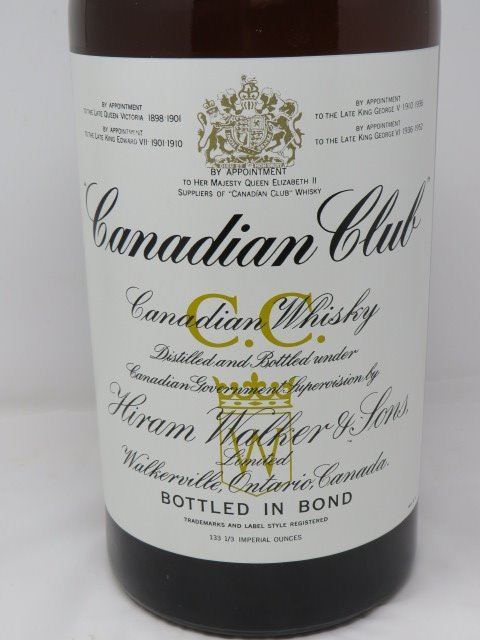 of a bottle of Canadian whisky from 1970. It is clearly labelled “133 1/3 imperial ounces”, which translates to 3.79 litres. What is that? My best guess, it is 1 gallon of wine, not to be confused with an Imperial Gallon, a gallon of Ale, or a U.S. gallon.

So, you may know what a mickey looks like, but required metric labelling removes any insanity like having to guess which of 4 types of gallons or 4 types of ounces, which vary depending on what fluid is being measured, is meant. The problem is not the volume of the container, but in what units the volume is indicated. It may also be clear why most countries decided to scrap the zoo of old local units, at least for trade, rather than try to standardize their values.

Base unit in Canada is the mickey of liquor: a hip flask, 12 fl oz.

Terms for sizes can be regional, though. When I was living in Ontario, we had the mickey, but then we had the “twenty-sixer” (26 fl. oz.), and the “forty-pounder” (40 fl.oz.). A Texas mickey was still a Texas mickey, though.

I don’t know if they still do, but at one point, Ontario breweries produced “quarts” of beer. I’m using scary quotes, because they weren’t quarts in the Imperial measurement sense. They were just big beer bottles, that held 22 fl. oz. of beer. I have no idea how they got their name, but if you ordered a quart of Molson Ex in a pub, you’d get the large bottle. If you didn’t specify a “quart,” you’d get the regular 12 fl. oz. bottle.

I’ve lived in Japan and then Taiwan on and off since 1982 and then consistently here since 1990.

I really don’t know if it matters that much which system people use. It’s so easy to convert these days that I wonder how essential it would be to convert.

Although both Japan and Taiwan are metric countries, they have legacy measurements, including the unit for measuring building floor size, called the tsubo in Japanese or ping in Chinese, it’s 3.3 sq-m. Taiwan sells soft drinks in 600 ml sizes because there is a legacy unit which matches that.

Although both Japan and Taiwan are metric countries, they have legacy measurements, including the unit for measuring building floor size, called the tsubo in Japanese or ping in Chinese, it’s 3.3 sq-m. Taiwan sells soft drinks in 600 ml sizes because there is a legacy unit which matches that.

If only we could be sure that Japanese, Taiwanese, Korean, different regions of Chinese (& Hong Kong) ping (= 36 square feet) were exactly the same, and haven’t varied over time even in the same locale. This was no better in the East than in the West, as a study of old rulers demonstrates.

NB one of the SI innovations has been to toss out unit definitions not based on fundamental physical constants, so no need for metal rulers, weights, etc to define basic units

I don’t know why we still have single to-go beer sales after the anti-DUI crusade in the 1980s, but we still have the “regular” 12 oz. beer. We have the “tall boy” 16 oz. beer. We also have the 22 oz. which is so unpopular I don’t think we call it anything but 22 oz. and the 40 oz. which is called the “forty” and (just as a matter of fact) stereotyped as something black people drink, and I’m not sure why that stereotype is there.

But a question…why is Canada selling beer in ounces? Or are you talking about many moons (not metric

If only we could be sure that Japanese, Taiwanese, Korean, different regions of Chinese (& Hong Kong) ping (= 36 square feet) were exactly the same, and haven’t varied over time even in the same locale.

What does that matter? When we were renting first then buying later, whatever the size a ping was in ancient Hong Kong wasn’t relevant to me.

Just remember that Canadian ounces are not the same size as US ounces. So don’t get confused when you go there… or just look for the metric label!

Touche. But I had thought Canada had went fully metric. In any event, unlike the 1970s, I could pull out my smartphone and immediately see the volume. No real need for standardization.

But a question…why is Canada selling beer in ounces? Or are you talking about many moons (not metric

Next, was the way the government implemented it. Basically, heavy-handed, and the “metric cops” shut down any place that dared use Imperial. Gas pumps that measured in gallons after the changeover date were locked by the government, and the gas station owners arrested (see “Car Cafe” in Toronto). Butcher’s scales were impounded or destroyed if they were not in metric.

That’s not how you make friends to the new measuring system. That’s how you make enemies. And because of that heavy-handed approach, many of us refuse to use metric to this day unless it is absolutely necessary. I measure my height in feet and inches, I measure my weight in pounds. Beer comes in 12 fl. oz. cans, or a 20 oz. pint at the pub. It’s 130 miles to Calgary from my location. I can be in Regina, Saskatchewan in six hours, but I think of it as 360 miles. My vet tells me that my cat weighs 6.5 kilos, I say, “Okay Doctor, I don’t know kilos, what’s that in pounds?” He hits a button on the scale and tells me my cat’s weight in pounds and ounces.

To use an analogy, one night, we went to bed speaking English, the next morning, we woke up and were expected to speak another completely unfamiliar language, in a country where English was outlawed overnight.

“How many grams?” asked the clerk. “You have to ask for it in grams.”

The old lady stood her ground. “I’d like a half-pound of salami, please.”

“How many grams? You have to ask for it in grams.”

The old lady had had enough. “Fuck your grams! Fuck your metric! Fuck you!” And she walked out. Probably not something that was worth discussing at the Senior Ladies’ Bridge Club at St. Leonard’s Church, but noteworthy in my opinion.

Me, I just asked for two bucks’ worth of salami. But the old lady showed how much Canadians didn’t support the conversion, and stubbornly use Imperial measurements to this day.