The most quintessential movies of the 1960's

An argument ensued last night over what was the most quintessential sci-fi movie from the 1960’s. My friend insisted it was “2001: a Space Odyssey” because it was the 1960’s and, well, the subject involved an optimistic view of space travel and it involved a lengthy artistic sequence evocative of hallucinogenic drugs.

I thought that while one could argue that Kubrick’s masterpiece was perhaps the BEST sci-fi film of the decade, it was not the most representative film of the genre during that period, and that “Planet of the Apes” with all its you-nihilistic-humans social commentary was more exemplary of what the 1960’s were all about.

Apes was more “quintessential” in that it embodied a lot of 1960s themes. Odessey is, as you said, a better movie and more timeless. Although the LSD scene at the end was definitely 60s.

This, not because it was a great movie (it wasn’t) but because it was about the alienation of parents from their college-age children. That was pretty much a defining characteristic of the 60s.

That would be my choice. Angst, anomie, rejection of societal norms (plastics!). It was all the rage.

There was also Dr. Strangelove, which looked at the absurdity of the nuclear age and the folly of governments.

Bonnie and Clyde
The Graduate

Both epitomized the message of doing your own thing and ignoring societal values.

I’d have to agree with The Graduate. However, there are a few other contenders for capturing the zeitgeist of the 60s:

Whose afraid of Virginia Woolf

Breakfast at Tiffany’s - I have never seen the whole thing myself but it just screams 60’s movie to me at least.

“The Graduate” jumped immediately to my mind, that’s for sure.

Easy Rider
The Graduate
if…

It depends on what you mean by “The 60’s”
Since decades are only arbitrary numbers we place on them, they really don’t correlate to what was going on for an entire ten year span. If, as one poster wrote, the 60’s was “Angst, anomie, rejection of societal norms (plastics!).” I’d say that was more in line with how the feelings were in America from 1964 thru 1975.

Prior to, let’s say late '64, the feeling in this country was more or less still the '50’s feel. By the time of JFK’s assassination, the revolution of pop music and the eventual growth of the Vietnam War, well, that’s when the angst and the rejection to what was considered how life should be lived began to take hold on the country.

I agree that “the 60’s” means a lot of different things to people, and there’s a difference between the early 60’s and the later 60’s.
Movies like “Easy Rider” and “The Graduate” are kind of about the changes “internally” - within the US. Along those lines is “Guess Who’s Coming to Dinner”.

But for me, when I think of the 60’s, I think about the cold war. About the huge tensions between the US and USSR, and the threat of the nuclear WW III. “Dr Strangelove” was a great comedy addressing this tension, but when I think of the overall “feel” of that cold war era, “Ice Station Zebra” is what comes to mind.

I would like to contribute two sites that may be of help to people when it comes to choosing some films.

IMDb's advanced search allows you to run extremely powerful queries over all people and titles in the database. Find exactly what you're looking for!

The second is “100 Greatest Movies of the Sixties” 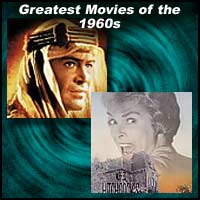 List of 100 Greatest Movies of the 1960s including the year, director, and leading actors.

. “most popular” does not always mean “the best”. In fact sometimes there is almost no relation at all.

. I thought it would be good to let people see 100 candidates right in front of their eyes at one time. The big problem that I have with finding these kinds of sites is that there are so many that are just (Dang! I forget the actual term but I think maybe they’re called “Bait Sites”). They show one item per page with a bunch of advertising and to see all 100 items, you have to slowly and painfully click on each page … one at a time. I wish that kind of crap was illegal somehow or there was some software that would gather up all 100 items and put them all on one page. Anyway, that is why I always try to chose a site that simply shows you all the goods at once and doesn’t torture you.

. I thought that some people might know of some good films from the 60s but might not remember some others off the top of their heads. That’s why I hope that having links to some of these kinds of sites will help people make their best choices.

There were also several blockbuster musicals like West Side Story, Sound of Music, and The Music Man, along with dramatic blockbusters like Dr. Zhivago. But they didn’t really represent the 60s, other than in a genre sort of way.

In terms of the history of American cinema, what defines the 1960s is that the decade straddled the Fall of the Studio System era (1948-1967) and the New Hollywood era (1967-1982). So what is the “quintessential” '60s film would depend on which side of that divide you’re talking about.

I really like the idea of having a few “genres” for films and being able to choose one film for each diff genre.

In the 60s there was a lot of interest (and violence and legislation and all kinds of other things) to do with race relations. In that genre, I think that

**To Kill a Mockingbird 1962 **just might be the best film. It wasn’t the kind of movie that hit you over the head. It was very soft spoken and laid back. But it sure did make a great point and it made that point in a way that most people will remember forever. IMHO, a truly great film.

In the “War Movies” genre, I would go for The Guns of Navarone 1962. I always loved that film.