The Most Valuable Artifact In The World?

As a fan of Antiques Roadshow, and watching an episode of “It’s Worth What?” last night, I was wondering what would be/is the most valuable artifact on earth today?

A quick Google search had several people suggesting The Rosetta Stone, others claiming any number of Egyptian finds, and according to the ever-reliable Wiki answers:
“The most precious diamond, basis of its importance and value, not based on carat will be The Koh-e-noor, which is now kept in hand by the British Jewels and a part of the British Crown originated from Andhra Pradesh, a state in the Republic of India. Its price cannot be valued and its calculated aproximately as 3.5 times the wealth of the whole world.”

I have to admit, 3.5 times the wealth of the whole world is a pretty steep price - but what do you have around the house, or would suggest is more valuable?

British Crown Jewels would have been my first guess, as they combine massive historical significance with intrinsic value.

Is there one “original” handwritten copy of the US Constitution or Declaration of Independence? Or the Magna Carta?

It’s hard to beat that, but I’m wondering what Shrouds of Turin are going for these days. Even if it’s fake, which it most likely is, it must have a pretty high value.

How is anything worth more than all the wealth in the entire world? Who are you selling it to? The Klingons?

Well, one thing’s for sure. You couldn’t have two things each more valuable than the entire wealth in the world.

How is anything worth more than all the wealth in the entire world? Who are you selling it to? The Klingons?

My thought exactly. It can’t even be worth all the tea China.

Clearly it can only be used to purchase the Hitchhiker’s computer, which is more powerful than all the computers in the universe, including itself.

Well, one thing’s for sure. You couldn’t have two things each more valuable than the entire wealth in the world.

I just like that the price cannot be valued… but the price HAS been calculated.

I am tempted to purchase it… but I’m not going to buy it.

I just like that the price cannot be valued… but the price HAS been calculated.

I am tempted to purchase it… but I’m not going to buy it.

I would, but I am out of pocket change.

Isn’t there a baseball that was signed by Issac Newton, Hitler and that Homeless Guy With The Radio Voice?

That’s gotta be with a pretty penny…

This is, I think, one of those really cool questions that unfortunately has no real answer. The first problem has to do with the concept of “valuable”. In real-world terms, I would say the value of something is what that thing would sell for if it were put at auction. So, operationally speaking, nothing can be more valuable than the largest amount of liquid assets that a person or consortium of persons can amass at a given time for the purpose of making a purchase. Whatever that figure is, there are probably a lot of things that would be at that ceiling value.

It’s still interesting to think about what would make the list.

I would, but I am out of pocket change.

You need a couple of trillion-dollar coins.

For something small enough to carry, I’m guessing The Black Stone might fit the bill. It’s tremendously valuable to over a billion people. I don’t think any other major religion or movement has a similar small object of such huge significance.

On a slightly humorous note:

We visited the Metropolitan Museum of Art in NYC. They had an exhibit on superhero costumes. On one wall, they framed comic books of the first Superman, first Batman, first Spider-man, and about 10-15 others. I remarked to my wife “Do you realize how valuable this wall is?”

In the Metropolitan Museum of Art.

a.k.a “The most fabulous object in the world”

Well, if it isn’t the Ark of the Covenant, the **Holy Grail **or the Crystal Skull, someone steered **Indiana Jones **in the wrong direction…

Technically the amount of money in circulation is like 50 times that of the actual value of all the goods and services availible in the planet. You’d need 50 earths to be able to spend all the money in this one. Speculative investment capital, SDRs et al. For this very reason your money has no value (especially as touted: a proxy tool for measuring your values). It’s so redundantly worthless at various levels, it’s a malifitial detriment. It’s hard to imagine you trading it for something worse, like crypto. Oh an there you go, cripto has a what 3 trillion dollar market cap. There are two things which YOU value more than all the wealth and your faith makes it real.

The first time I saw the Rosetta Stone was in 1997. The British Museum had it on open display. Any patrons were allowed to touch it. (and yes, I did as well) I was amazed by this and commented to one of my colleagues with me that if they leave it like that it will be worn down smooth in a few decades. 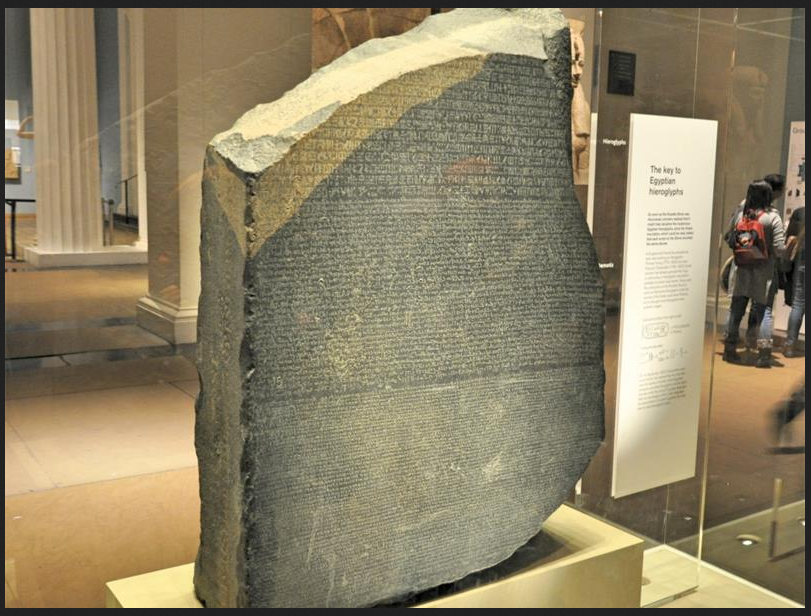 I visited the British Museum in 2019 and they had relocated it behind glass.