Hell in your own reports one of the mass firings was 0.6% of the workforce

Dang it - I meant 0.6% in my post above and can no longer edit. I know how to do percentages. DOH!

Yes, I already read - and discounted - that one. What’s your point? That you found a story mistaking weather issues for vaccine walkouts, and therefore I’m wrong even though I didn’t mention it?

Do you have any evidence at all for that assertion?

The fact they are quitting is evidence, Sam. And I’m not going to dignify your question with examples from the health care industry, the logic of valueing health care professionals unwilling to pass on diseases higher than those willing to make patients sick is rather unassailable.

And, no. A few thousands spread across 165,000,000 doesn’t move the needle at all. Here’s something which moves the needle: 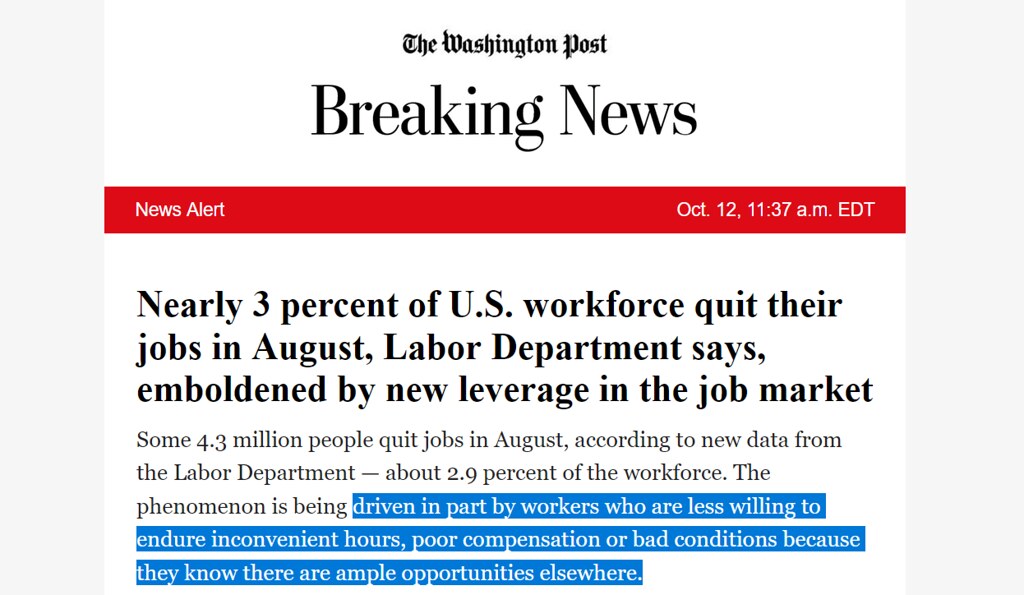 2.9% is 5 million people, who are quitting their jobs for better opportunities. That is VASTLY more than those quitting because they are stupid-assed barbarians.

It also means “don’t believe everything you read”.

I read that post as a request for a cite. The NY maternity ward story seems to be legit. 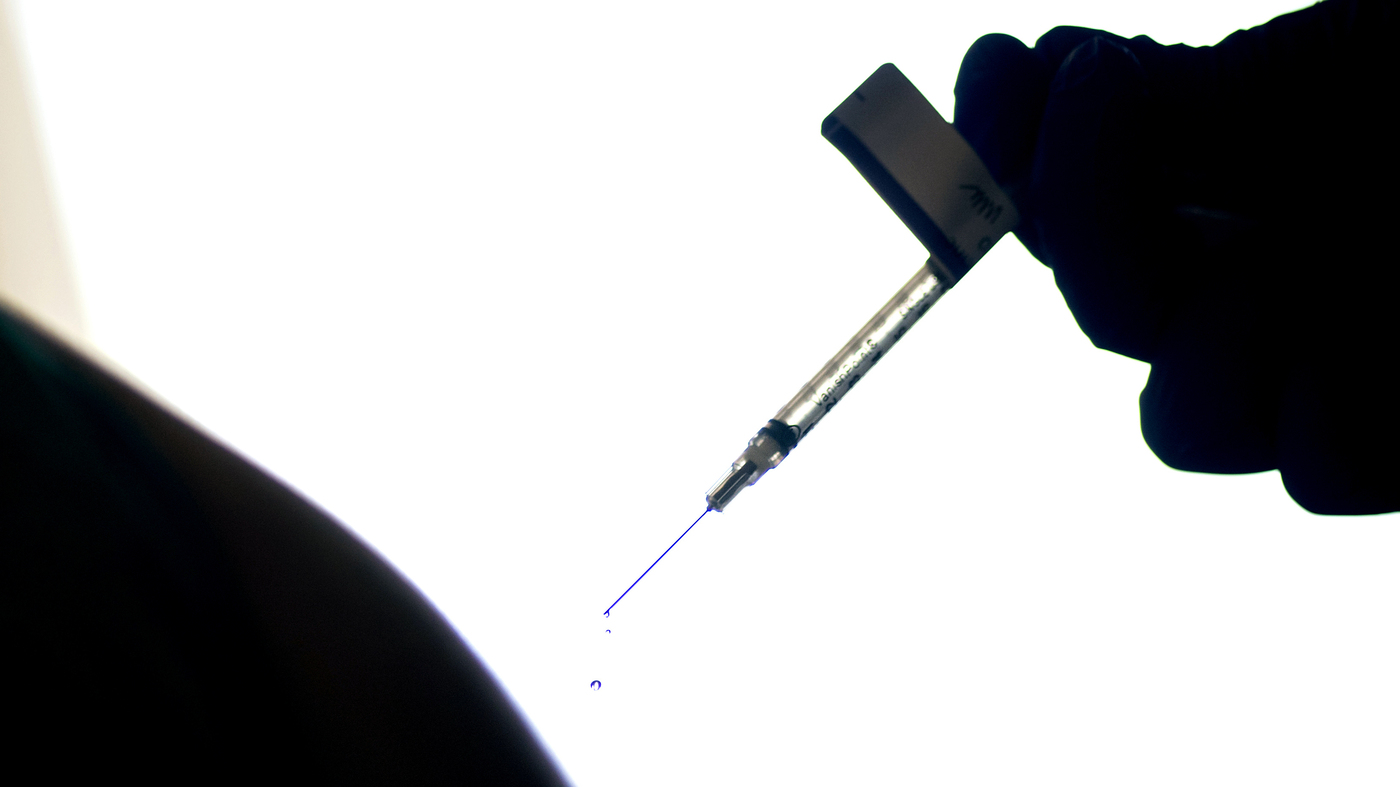 A N.Y. Hospital Will Stop Delivering Babies As Workers Quit Over A Vaccine...

Lewis County General Hospital in upstate New York is pausing maternity services later this month after dozens of staff members quit because they refused to get a COVID-19 vaccine.

I wonder if these walkouts due to industry-wide vaccine mandates are saying “nah” to working again in their field, or what they are doing next?

Who would want to hire a ‘health care professional’ who quit because of a vaccine requirement?

More importantly, if all the hospitals in-state require employees to be vaccinated, and your field is working in hospitals, I really don’t know what you’re going to do.

But may I speculate, on-topic, the vaccine mandate is for most of them probably the ‘last straw on the camel’s back’ rather than a single thing that makes a happy employee say “fuck this”.

The NY maternity ward story seems to be legit.

From your article, which is about a month old, about 30 people had resigned due to the mandate out of 450,000 hospital workers. With an additional 165 workers who had not declared their intention to stay or go. That should give us a realistic idea on the scale of these walkouts, but if seven of the walkouts occur in a single ward of the only hospital in a 20 minute radius it can have a significant local effect.

Anecdote time: My wife was a teacher. She recently quit.

COVID was the last straw. She had been working harder than ever running class over zoom, trying to keep the class engaged and learning. At the same time parents were angrier than ever about, well, everything. The schools were being kept closed too long. Not long enough. The teachers aren’t working hard enough (boy did my wife blow her top whenever she heard this). Yes to mask, no to mask.

Finally she said f*k this, I’m outta here. We did some calculations and figured we can live without her salary for a decent period while she figures out what she wants to do.

Yeah, you notice how those people aren’t quitting? They’re being fired, which means they wouldn’t be counted in the numbers presented in that analysis.

And it still doesn’t add up to anything like 4+ million people.

Of course you can point out where I said the numbers were anything like 4+ million people? Or is this another straw man argument, like the Southwest pilot story I never mentioned not being true?

And it’s a fine distinction to say someone is fired rather than quitting, when the reason they were fired is a voluntary choice that they knew would lead to a firing. And anyway, most of them are ‘layed off’ and presumably some will come back either after the mandate is lifted or they get tired of being unemployed and get the shot.

And who is a member of a death cult? What are you even talking about?

Of course you can point out where I said the numbers were anything like 4+ million people? Or is this another straw man argument, like the Southwest pilot story I never mentioned not being true?

You’re the one who came into a discussion of over 4 million people quitting their jobs to talk about “An awful lot” of people quitting because of vaccine mandates. If you didn’t want us to think this was some statistically significant part of that 4 million, it was on you to make that point. Don’t blame us for your poor communication skills.

And it’s a fine distinction to say someone is fired rather than quitting,

It’s literally the only important point when discussing a jobs report specifically looking at the number of people who have quit their jobs.

Separations. Separations include all separations from the payroll during the entire reference month and is reported by type of separation: quits, layoffs and discharges, and other separations. Quits include employees who left voluntarily with the exception of retirements or transfers to other locations.

“Quits” are explicitly not layoff or being fired, and they are much, much higher than layoffs. Like, almost four times higher.

Sam either you wilfully misrepresenting these cites or you think I’m an idiot.

Cite 1 - most come in at 97% vaccinated and the final quote is “We’re so under the water right now that losing a couple of people who don’t want to get vaccinated - it’s going to be sad (but) the impact will be minimal,” Francescutti said." It actually might more of an indictment against the provincial governments, but that wasn’t your point.

Cite 2 - has no numbers and simply employment lawyers pointing out that people are contacting them about rejecting mandates. “Still, he said he’s not expecting mass resignations that will leave companies without enough workers given the relatively high vaccination rate among the general population.”

Cite 3 - " United Airlines will begin the process of laying off roughly 600 employees — less than 1 percent of its workforce — who refused to comply with the company’s COVID-19 vaccine mandate, it announced Tuesday."

Cite 4 - Actual possible impacts “In New York City, more than 5,000 of the 42,000 employees of the public hospital system were unvaccinated as of Friday.” which gives us 12%

Cite 6 - LA PD actually is “An awful lot” "An LAPD spokesperson declined to comment on the suit on Monday, but said that as of 3 September, 47% of LAPD staff were fully vaccinated, and 54% had received at least one dose. Those figures are significantly lower than the rates " of course this was from a month ago…the idiots may actually have actual managed to meet the city’s rate of ~70/80 %.

Cite 4 - Actual possible impacts “In New York City, more than 5,000 of the 42,000 employees of the public hospital system were unvaccinated as of Friday.” which gives us 12%

Sam’s cite was from before the mandate went into affect. Here’s one from after
https://www.nytimes.com/2021/09/28/nyregion/vaccine-health-care-workers-mandate.html

So it seems the vast majority of workers would rather be vaccinated than be out on the street.

This is usually the time where I would come in here and discuss how modern capitalism allows corporations to literally deny the rights of large swaths of the population, but that would be churlish of me. And incorrect, as that is not what is happening.

People bitching about vaccine mandates for employment remind me of people who get full-body tattoos including their faces and out to their fingertips, then bitch about difficulties in getting a job. You are, in fact, free to tattoo your entire body, but there are consequences to doing so and one of them is that you will be less employable in many industries. That might not be fair but it is a fact. Likewise, you are free to not get vaccinated. The Vaccine Police will NOT come out to your home, hold you down, and vaccinate you against your will. The choice to forego the vaccine, however, has consequences. If a job now requires vaccination against covid (or other diseases) then you can either get the vaccine to get/keep that job, or you can exercise free choice to NOT get vaccinated and seek employment in a job that does not require it.

Does society favor some choices over others? Yes. And if the basis of that is to protect other peoples’ health and lives (which would definitely apply in a healthcare context) then I’m totally OK with that.

Fine if these workers want to quit, or be fired. I wouldn’t want morons working on me or for me anyway. And they should not collect one thin dime of unemployment.

Almost all of my conservative friends are against employer-mandated vaccines, and support laws that prohibit employers from enacting them. I find this perplexing, since these same people are constantly arguing against the government passing laws that regulate business. In addition, they’ve traditionally argued that an employer should have the right to fire an employee for any reason. But now they’re saying an employer shouldn’t be allowed to fire a person based on vaccine status. So much for being “pro-business.”

Finally she said f*k this, I’m outta here. We did some calculations and figured we can live without her salary for a decent period while she figures out what she wants to do.

I truly empathize with your situation, glad the numbers are in your favor, and I would not be surprised if your wife figured out some non 1099/w-2 ways to supplement income during the search.

My kid turned me on to consumer surveys and marketing consultations. It’s an easy $100-200/mth but could easily be more as I don’t really search them out and I only utilize 1 site. Sophia had profiles on multiple sites and people were throwing money at her, as a 19yo white female. She once told me ‘I want to get these boots for $200 so I lined up a few surveys in the next couple of days.’

They pay in Amazon gift cards or similar, not cash. This doesn’t bother me as an Amazon GC buys dog food as well.

The fastest & easiest way to recruit high quality participants for any type of user research study. Make better decisions by getting feedback from real users.