The Old Guard - Netflix movie. Anyone else see it?

I am guessing this was a real theatrical movie that Netflix bought. I have no idea why it was not released, though. It is actually really good. I was honestly happily surprised by the movie. I think it would have worked slightly better if they cut the opening scene, which kind of spoils the central plot point before the movie needs us to know about it.

Anyone else see this yet?

I thought it was alright, in a generic sort of way. I would have been cross if I paid money at the theater, but I didn’t feel like that time was wasted getting high watching Netflix.

It felt to me like it was what I call a “producers movie”. That is, a movie without a real creative vision, just an action plan. “I know a guy who owns a car lot in __________, we can use his cars in the chase if we put his daughter in the movie” sort of thing. ‘Workmanlike’ is another word I would use. A TV movie with a theatrical budget. But a solid one.

Do you like action movies? Do you like Charlize Theron (what a cool name, btw)? Then this movie won;t blow you away but it will probably satisfy you. If they made a sequel, which they obviously hope to, I will watch it.

I thought it was fine. I’d be pretty happy if Netflix put out that type of content once a month or ever other month, but if I paid to go to a theater for that I don’t think I’d recommend it to anyone.

Just watched it. Felt like a pretty good TV pilot more than a big budget movie. Didn’t quite live up to its potential, somehow. Over the course of 12 episodes I’d have dug getting to know these characters.

(Since their powers are obviously supernatural, I don’t know why none of the immortals espoused some form of theism to counter Andy’s nihilistic atheism!)

I got bored and didn’t finish it.

I don’t mind a generic action movie, but it has to have exciting action to make up for things like poor characterization or a lack of an interesting plot. The Old Guard didn’t have that. It was staggeringly bland on all counts.

I thought it was totally “meh.” Watchable but forgettable. If it turns into a series, I’ll watch the first few episodes. It was clearly setting up a world where multiple stories could be told, but I’m not sure if they will be worth watching,

Just watched it. Felt like a pretty good TV pilot more than a big budget movie.

This. I enjoyed it, but there wasn’t much in it that was terribly original or gripping. And the ending suggested there was more to come.

It was fine. Not blown away by it, but I’d watch the sequel.

Personally, I find the Dope way too difficult to impress when it comes to pop culture. Basically this guy… 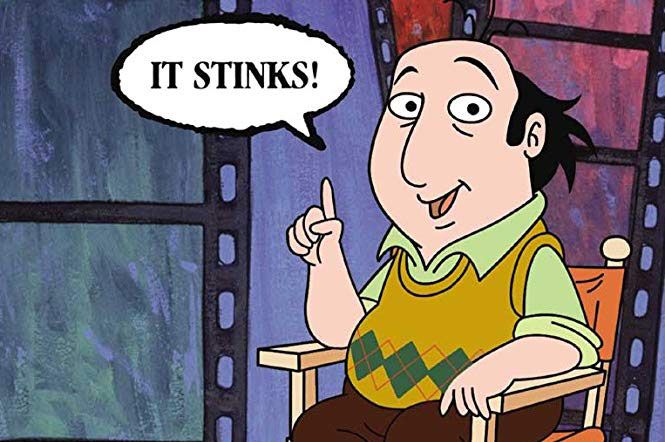 I loved the action, the fight in the plane felt a lot more real and brutal than other action scenes I’ve seen recently. I liked the characters a lot as well, and they did a good job exploring how immortality effected them without dragging down the movie too much. The plot was only fine, as I am still not sure why I’m supposed to believe scientists shouldn’t study them to unlock immortality.

The plot was only fine, as I am still not sure why I’m supposed to believe scientists shouldn’t study them to unlock immortality.

Because their immortality is clearly supernatural (and looks like being physics-violating too). What exactly would these scientists study?

The plot was only fine, as I am still not sure why I’m supposed to believe scientists shouldn’t study them to unlock immortality.

From a personal standpoint - because they end up spending years in a lab being used as guinea pigs and possibly being subjected to extremely unpleasant procedures, even if we’re talking about scrupulous scientists (which, here, we’re not).

From a societal standpoint - overpopulation is already a massive problem. Now imagine what happens if an increasing number of people stop dying altogether. Also imagine what happens when it becomes known to the rest of society that there’s effectively an immortal uberclass. Hint: nothing good.

I watched it last night.

Overall, I thought the film was good.

I enjoyed the take on immortality, thought the characters were well-thought out and interesting and thought the cast/acting was great. The Merrick character was cartoonish but I thought the actor did a good job of bringing the menace, even tho IMO there’s no believable way he could have been as violent and quite as amoral as he presented without a serious origin story of his own.

I thought the first act was terrible, specifically the fight scene in the airplane. It was ill-conceived and made little sense within the story IMO. Andy would know how to steer this encounter from start to finish, and what the script presented required a complete suspension of disbelief: the motivations for that fight simply did not exist.

I had to dock half a point for the repeated gratuitous and stupid, stupid use of shaky cam. It’s always been a shite technique and it’s use here was unnecessarily distracting.

I docked at least another half point for the unbelievably poor soundtrack. The songs must have been free or by someone’s family member or something because every song was a) crap, b) a downer and c) completely anthem to the visuals on screen at the time. I can only surmise that they were somehow going for “world-weary”; it isn’t the only time the film missed that mark.

Other than that, I thought it was solid. Not perfect; lots of plot points left unsaid and we’re just supposed to go along with it; that’s fine as long as the rest of the movie carries me along and this did.

I thought that Charlize Theron did an adequate job but, like the music in the film, she doesn’t convey “world-weary" well; she did better at that in Fury Road IMO. She did convey “an assertive, determined and experienced leader who is used to people doing what she tells them to do” well, tho. And her fight scenes were well-done: excellent choreography and performances in all of them.

Luca Maranelli and Kiki Layne were both excellent. Chiwetel Ejiofor was his usual dependable self even if his emotional bits in act 3 weren’t very convincing (I blame the writing; he did what he could with the material).

I will likely watch it again; it was entertaining despite not being epic. I would also watch a sequel.

I have not read (or even known about) the source material, but I hope that Andy is not killed off. The wealth of experience she has that she can impart to Nile and to the other immortals is beyond significant, and I’d like to see that exploited within the story.

because every song was a) crap, b) a downer and c) completely anthem to the visuals on screen at the time.

That should be “…completely anethema to the visuals…”

Can someone explain something to me? At the end it’s revealed that their missions caused something good to happen. They label that as a “purpose”, but is it a coincidence, or is there some sort of cosmic supernatural force behind it, that’s making them immortal?

They set them up as atheists, but that made me wonder.

One thing that bothered me is there’s obviously something supernatural going on, but they act like there isn’t.

Can someone explain something to me? At the end it’s revealed that their missions caused something good to happen. They label that as a “purpose”, but is it a coincidence, or is there some sort of cosmic supernatural force behind it, that’s making them immortal?

That’s the purpose that they’ve (and specifically Andy) set for themselves, was how I took it.

Andy, especially, has perspective; she knows how things compound and accumulate over time periods that most humans aren’t able to grasp (or live thru). She doesn’t need to have crystal-ball-guaranteed-knowledge-of-the-future to realize that helping lots of people survive and thrive is going to have repercussions dozens or hundreds of years forward. YMMV, of course.

Hey, will Andi age now that she is no longer healing? My wife thought she might retire or at least not fight and still be immortal in terms of aging.

I watched it last night. I thought it was a perfectly fine but forgettable action/scifi movie, which is pretty much exactly what I’m looking for on Netflix on a Thursday night. I don’t know if I’ll watch it again, except to maybe refresh if the sequel gets made.

The scene in the armored car with the two immortal lovers (seriously, I watched it last night, and I already forgot their names) was the best part.

The scene in the armored car with the two immortal lovers (seriously, I watched it last night, and I already forgot their names) was the best part.

Definitely the best scene. Especially with the immediate aftermath.

I like that they are betrayed by one of them and they don’t kill him or even end their relationship with him. They told him 100 years out of the group and he can come back. Very tough, but fair.

Most movies would have killed him or done something equally bad.