The release date has been pushed forwards a few months, but there is a preview clip:

The Orville: New Horizons Has a New Sneak Peek and a New Release Date

Originally slated to return in March, the Seth MacFarlane sci-fi series will now make its Hulu debut in June.

I’m excited for it.

I was dubious about the show at first and it took a bit to find its stride but I think it turned into a very enjoyable show. Happy to see it coming back.

Loved the show, but we don’t have Hulu. I keep hoping it will show up somewhere where we can see it.

I like the show, but I don’t want to pay for hulu.

I think this is a sinister plot to keep those of us who have Hulu from dropping it.

Wait till the whole season is dropped, then pay $7 for a month, then watch the whole show for $7. No one goes into movie threads and say “I don’t pay for movies” or book threads and say “I’m not willing to pay for books” but every thread about a streaming show has that. It’s not like a cable company or a gym where it’s a huge hassle to cancel - it’s the easiest thing in the world to subscribe for a month and then cancel.

Anyway I’ve been looking forward to this but it’s been a huge wait. I really thought the show started to hit its stride and become legitimately good and not just sort of goofy fun towards the middle of the second season. It feels like a modernized TNG, which is exactly what they were going for, and I thought some of the episodes examining an issue actually did a surprisingly thoughtful job about it, particularly the one about the recreation of the long dead person from her digital records.

Oh yes! And if you can handle the early poor taste humor, it’s been good Star Trek since the beginning.

Ensign Boimler would like to have a word with you.

Oh yes! And if you can handle the early poor taste humor, it’s been good Star Trek since the beginning.

How can you say that when Seth McFarlane is not being punched in the mouth in every episode?

Ensign Boimler would like to have a word with you.

Preach it! I enjoy The Orville, but I like ST Lower Decks quite a bit more.

Here’s more on the June 2 season premiere on Hulu: 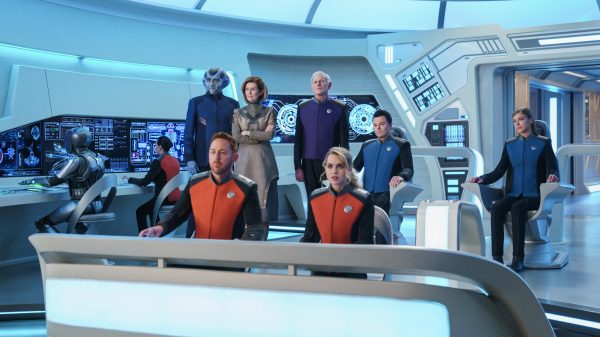 Fans of Seth MacFarlane’s space adventure series The Orville impatiently awaiting its third season—titled The Orville: New Horizons, in its move from Fox to Hulu—will have to wait just a litt…

Saw that it will also be on Disney+, but unless I am wrong only internationally (where Hulu is not available)

Well that was a cheerful episode.

I loved the first episode! It’s so bright and colorful and the soundtrack was great (although a bit loud at times). It was a little more dramatic than earlier seasons which I think is good.
Anything else I say would be a spoiler and I still can’t remember how to make those tags.

Well that was a cheerful episode.

I got the feeling that they decided to show ST: Disco how to do “emotional” properly.

Funny that it also had plot elements from the most recent Strange New Worlds.

I’ve found some amusement in the rank/name combinations of some secondary characters. Such as Lt. Dann, Ensign Parker, Admiral Halsey, etc.

Dr. Finn still annoys the crap out of me, but I’m glad this show is back.

Just started watching Season 3, and it’s a bit confusing, because I’m sure I’ve seen the episode before. It starts with Peter Griffin and Steve Smith retrieving a replicator from an old outpost, escaping from some murderous Datas, and then encountering Peter’s ex-wife from a timeline where they didn’t get married.

Was that originally a preview that I saw at the end of Season 2?

ETA: I hope that wasn’t too spoiler-y.

That sounds like that last episode of the second season.