As long as those dead voters are registered, their votes will count! Twice, to make up for the tragedy of their loss.

a “flotilla of front groups” once focussed on advancing such conservative causes as capturing the courts and opposing abortion have now “more or less shifted to work on the voter-suppression thing.” These groups have cast their campaigns as high-minded attempts to maintain “election integrity,” but Whitehouse believes that they are in fact tampering with the guardrails of democracy.

This might be the money quote of the entire article - it’s about the dark money and how high-powered interests really and truly have destroyed American democracy, perhaps irreparably, since Citizens United decision.

Or they’ll just remove a shit ton of “inactive” Democratic voters from the list of eligible voters. Hyper-partisan election officials will probably put that close to the top of the agenda. So if someone skips an election or two but then decides they want to vote for the next Barack Obama, they’ll show up and be forced to sign provisional ballots. What’s the likelihood of those provisional ballots being counted by partisan hacks? The Big Lie failed because everything about the election process was clean through election night; they tried to lie about mountains of facts, which didn’t work. The strategy going forward is going to be to muddy the waters as the votes come in. I had feared that the Republicans would try to wink and nod at Russian hackers to access voting databases and machines but it appears that this never happened. Instead the Republicans have probably constructed a far more sophisticated democracy-killing machine, and like everything else, it involves wounding democracy first at the local and state level.

Tangential to that, I fully expect more of this: Crystal Mason's voting conviction under review by Texas court | The Texas Tribune

Those new restrictions on things like handing out water to voters standing in line and limiting the number of people you can drive to the polls - they’re not just ways to limit voting; Red State AGs will prosecute people of color just to send the message to these communities: vote, and you might end up in prison.

“Never give up. Never surrender!”

They’ll never admit an election loss in the future. Any negative outcome is the result of Democratic cheating and that’s why the sentiment for seizing power undemocratically is growing in support.

I’m trying to figure something out here…

Apparently the Texas AG has announced an audit of the 2020 Presidential election in four Texas counties (Dallas, Collin, Tarrant and Harris), two of which went FOR Trump in 2020, and in a state that went for Trump in 2020.

Even if the Angry Creamsicle himself called for the audits, what is the point? What do they hope to gain? I mean, he DIDN’T lose in Texas, and didn’t lose in two out of the four counties he called for audits in.

Let’s see…well, they could see if anyone who voted for Democrats violated voting laws and then prosecute them. That way, word gets around in these communities: Don’t vote, boy.

In the short term, the Texas Secretary of State (not AG) announced the audit because Trump demanded that Abbott add election audits to the agenda for the special legislative session currently underway. The goal is to placate him without having to adopt legislation, which would be divisive even within the Texas Republican caucus.

Larger picture, this is part of the plan to normalize election audits so that when they DO need to overturn a result people have come to accept the validity of such audits. And that such audits only seem to be necessary in heavily Democratic urban counties or suburban counties that are trending that way. Notice no Republicans are demanding an audit of Roberts County, population 938, that went 96% for Trump.

Larger picture, this is part of the plan to normalize election audits so that when they DO need to overturn a result people have come to accept the validity of such audits. And that such audits only seem to be necessary in heavily Democratic urban counties or suburban counties that are trending that way. Notice no Republicans are demanding an audit of Roberts County, population 938, that went 96% for Trump.

You pretty much summed it right up with the above

Even if the Angry Creamsicle himself called for the audits, what is the point? What do they hope to gain?

Larger picture, this is part of the plan to normalize election audits so that when they DO need to overturn a result people have come to accept the validity of such audits.

And also just to keep trumpy’s name and orange face in the news and to show he still pulls the strings.

Um, I think you missed the announcement:

Um, yeah, I have no clue how that one got by. Brutal.

This is the most in-depth article I’ve yet seen about the Mesa County Dominion breach; everyone should be made aware of this* IMO: An elections supervisor embraced conspiracy theories. Officials say she has...

Mesa County, Colo., Clerk Tina Peters is accused of sneaking an unauthorized person into her office to make copies of Dominion voting-machine hard drives — copies that later ended up online and in the hands of conspiracy theorists.

Over the course of the past month, in a lawsuit filed by the state’s top elections official, Peters and her deputy have been accused of sneaking someone into the county elections offices to copy the hard drives of Dominion Voting Systems machines. Those copies later surfaced online and in the hands of election deniers. The local district attorney, state prosecutors and the FBI are investigating whether criminal charges are warranted.

*This is the first time I’ve used the “Gift” link; I hope it works and everyone can access the full article.

Seems rather close to a violation of the Computer Fraud and Abuse Act; it’s a question of whether feds would have jurisdiction of what would surely be argued as an intra-state case. Colorado may have its own laws that deal with this, though. And there’s the matter of whether it violates election laws - not sure how, honestly.

IMO the best line is

I do believe that voting in this country is a privilege, and <interviewer interrupts “It’s a right.”> it’s a right as well… 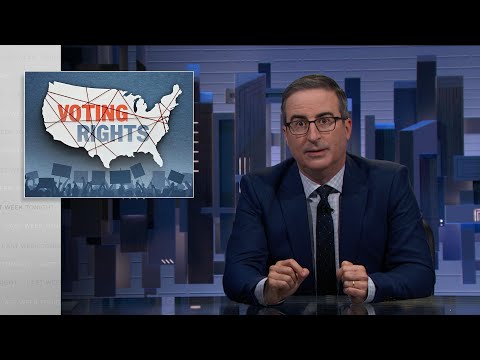 While I am aware of what’s going on it’s still shocking to see pointing out racism be banned in a legislative body while actual racism is going on.

This is also why the right keeps throwing fits about nonsense stories about left-wing suppression of speech to give cover to what they’re doing.

The Texas Secretary of State’s office has announced what will be involved in the “full forensic audit” of voting in four populous Texas counties that dared to vote for Biden or move strongly toward him. And it’s . . . pretty much the same stuff they do after every election.

They’re pretty obviously trying to puff it up as much as possible to placate Trump, but most of this is just accounting and recordkeeping functions counties are already required to do. Oh, and the statement is clear that they will not be, “hiring or contracting with an outside firm to conduct these audits.” Sorry, Cyber Ninjas.

This is just Abbott trying to do the minimum amount possible to get Trump off his back. Nobody but Trump want to keep relitigating the 2020 election. Republicans would much prefer to focus on stealing future elections.

It’s more than that, though. Texas’ percentage of nonwhite voters increased dramatically between 2010 and 2020. Texas stayed red but the races have been close enough lately to envision a day when Texas might go the way of Arizona. The Texas GOP isn’t going to let that happen, and that’s why they’re targeting those counties

Can you imagine if Hillary Clinton had pressured New York State into conducting this kind of harassment campaign against election administrators in New York counties that garnered more Trump votes than expected?

I don’t know what you do for a living, but ask yourself how you would feel if you got up one morning and found high-profile political operatives were accusing you of treason and demanding you be executed for an imaginary crime? Pick a random regular guy in a five figure administrative job and harass him until he quits, kills himself or gets murdered. That’ll send a message to anyone that dares consider a career in election administration.

I get that reality has taken a major hit in the past few years. I know what it’s like to wake up thinking… I had the weirdest dream. Donald Trump was President and he sent love letters to Kim Jong Un and paid off a porn star he fucked and tried to shake down the President of Ukraine but no matter what he did everyone around him kept saying it’s OK he allowed to do whatever he wants. Then everyone was grounded- like the whole country - no one could go outside all year. Then Trump lost the election and got mad so Rudy Guiliani and the guy from the My Pillow commercial said he didn’t have to leave instead he had this weird costume party and thousand of people were literally climbing the walls of the Capitol and crawling in windows………

But we’ve got to stay grounded. This shit ain’t normal.

ETA: Does Abbott really think appeasing Trump will shut him up? He’s never going to shut up about this, he’s only going to get worse. He’s never going to accept his loss, by the time the mid-terms roll around he’s going to make everyone that wants his endorsement run on a platform of restoring him to office before 2024. He cares nothing about the Republican Party. He may just tell his base to vote D out of spite, like he did in GA last weekend,

Does Abbott really think appeasing Trump will shut him up?

Of course not. He’s not doing this to appease trumpy. He’s doing it to appease red Texas voters.

Greg probably wishes trumpy would die just as much as millions of others (including Republicans) wish it. Donald is nuttin’ but a big, bloated, orange albatross around those Republican necks.

This is also serving the Republican party though. It’s not just about appeasing Trump; the GOP is going for a permanent political majority.

Not really; the GOP is going for a permanent political minority that still manages through superficially legal processes to maintain political power despite their minority status.