The Sergeant Major of the Marine Corp's take on DADT repeal 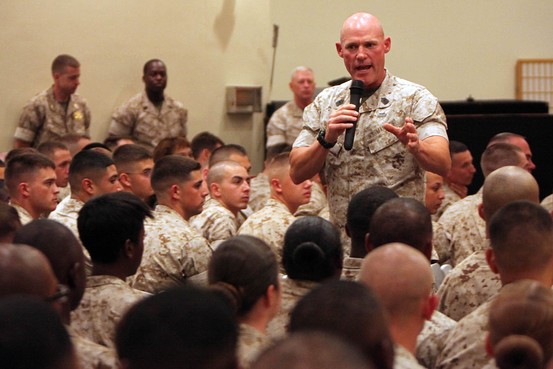 The Command Sergeant Major of the Marine Corps addressed a group of Marines at a base in South Korea several key topics, including the repeal of the "Don't Ask, Don't Tell" policy.

“Article 1, Section 8 of the Constitution is pretty simple,” he told a group of Marines at a base in South Korea. “It says, ‘Raise an army.’ It says absolutely nothing about race, color, creed, sexual orientation.

“You all joined for a reason: to serve,” he continued. “To protect our nation, right?”

“How dare we, then, exclude a group of people who want to do the same thing you do right now, something that is honorable and noble?” Sgt. Maj. Barrett continued, raising his voice just a notch. “Right?”

Dammit, I fucked up the apostrophe in the title. Grrr…I hate making that kind of mistake.

If you don’t already know:

“In the Marine Corps, sergeant major is the ninth and highest enlisted rank, just above first sergeant, and equal in grade to master gunnery sergeant, although the two have different responsibilities. Sergeant major is both a rank and a military billet, and serves as the unit commander’s senior enlisted advisor and to handle matters of discipline and morale among the enlisted Marines.[1] The Sergeant Major of the Marine Corps is chosen by the Commandant of the Marine Corps to serve as his advisor and as the preeminent and highest ranking enlisted Marine with a protocol equivalency of a three-star lieutenant general.[4]”

A very powerful dude - likely sits in meetings of the Joint Chiefs.

That’s powerful stuff considering the Marines are the service most in opposition of repealing DADT.

I love to see this kind of thing coming from the top, in a decisive and committed manner. It’s even better that it comes from the Marines’ top noncom.

According to Wiki, his first name is spelled Micheal.

Good lookin’ bloke. I was going to check out his official bio on the Marine Corps website, but I can’t access the site. I guess the Marine Corps servers caught some gay dudes checking them out, and panicked.

“Get over it,” he said. “We’re magnificent, we’re going to continue to be. … Let’s just move on, treat everybody with firmness, fairness, dignity, compassion and respect. Let’s be Marines.”

Pretty great, no nonsense stuff. I salute him.

Pretty great, no nonsense stuff. I salute him.

I wouldn’t. He works for a living.