The Star Wars Land Hovercars: Did Curtis-Wright Have One In 1959?

Remember Luke Skywalker’s hovering land car on tatoine? I read once that the Curtis-Wright Co, built a car which had vertical fans blowing down…this supended the vehicle about 2 feet off the ground (similar to a modern hovercraft). Propulsion was via a rear-mounted fan…like the airboats you see in Florida. The company tried selling these in 1959 (without much success). Anybody know the details of this odd vehicle?

The closest thing I know of is the Avrocar.

The trouble is with hovercrafts as personal vehicles is that they have no traction whatsoever, which makes cornering a sort of cross between an art form and a nightmare and also makes traversing inclines very problematic.

Luke Skywalker’s vehicle, on the other hand, suffered none of these problems because it was suspended using a force field, rather than a cushion of moving air, and also because it was fictional.

Luke Skywalker’s vehicle, on the other hand, suffered none of these problems because it was suspended using a force field…

The Curtiss-Wright Air-Car was just an ordinary hovercraft with rigid sides and “venetian blind” vents for steering, and some car-like trimwork. There’s some footage that shows up on Discovery Channel shows on hovercraft.

more here, scroll down for the photo links.

C-W experimented in the field of hovercraft with high hopes that the new technology would save their moribund company, and these hopes caused them to issue news releases and drawings of the new product long before the engineering department was ready. I have seen footage of some of the test ‘flights.’ First, the cars looked nothing like the drawing — that sweetheart was a marketing department dream, not reality. What they actually tested was bigger than a Ford Excursion, but still only seated two. It was a big plenum chamber with controllable shutters all along the perimeter for thrust, braking, and control. What the footage shows, however, is that the car was just barely controllable, even over smooth pavement in good weather. The noise was truly awesome, as well. To complete the dismal picture, hover height was only inches, and there was no flexible skirt — it had less off-road capability than an average sedan of the period. It was a wonderful dream, but to have spent millions on it was typical of a management team that took Curtiss from the biggest in the industry to bankruptcy. (— Joel Monka 9/5/00)

That’s because the force field wasn’t powerful enough, being only fictional.

Actually, it was suspended with wheels, and occaisionally on a lateral crane. (no cables). 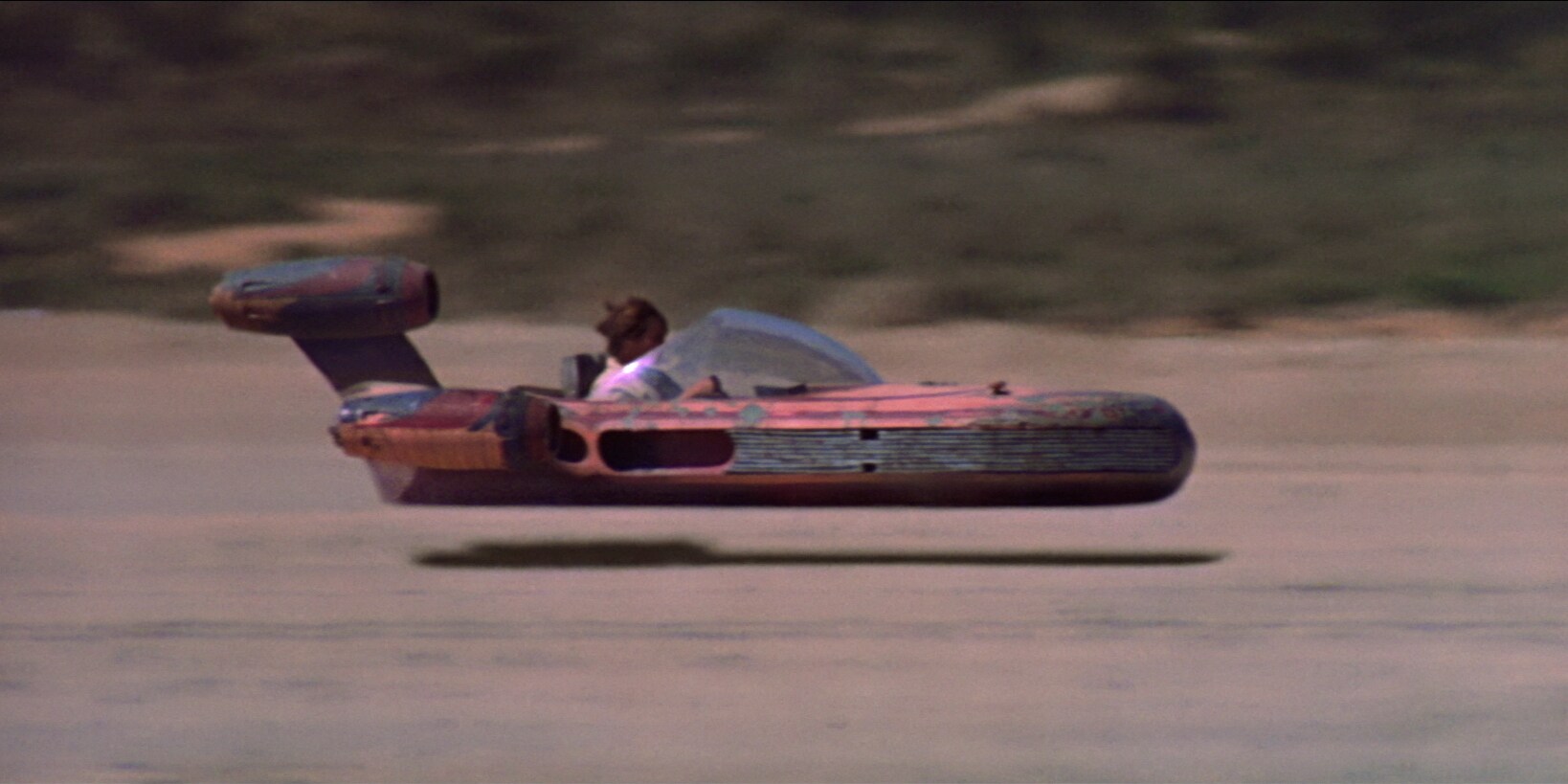 Luke Skywalker owned one of these nondescript but speedy landspeeders, racing the sand-pocked and sun-faded craft across the desert between the Lars homestead and outposts such as Tosche Station and Anchorhead. The X-34’s powerful repulsorlift engine...

When it comes out on DVD next week it might be completely CGI and have JAR-JAR RULZZZ!! painted across it.

Actually actually, it drove on wheels. I’ve seen production stills. Regular wheels. The “shimmering” effect was remarkably economical. Not only did it make people think that the “force field” was holding it up, but it allowed for a cheap soft-edged travelling matte to be used to wipe away the wheels, and make for sort fo a blurry sandy affair. Of course, some of the distant shots were pure matte shots with no wheels used at all.

Speeder for sale on eBay

Clip with speeder “aloft”
Original Prop Car
Crane mighta been used for the long shots, although they shimmer in the DVD as though they’re purely opticals, but if you watch the close ups of the speeder coming to a stop, it rocks bumps and jars - and their bodies move- as though they’re rolling to a stop on bumpy ground. Because, they were. No crane with cabling could have simulated those bumps.
( I know. That link with the wheels- is that cute or what? )