As I recall it, they go up to give him the blood test and he’s just gone. And he was somehow making a spaceship in the basement (that he dug?) How’d he get out? Did another Thing do it?

Blair was infected by somebody else at some point (Palmer or Norris) and was stuck in that shed for more than 48 hours iirc. With everyone else distracted with the blood tests he was able to lift the floor boards under his cabin and dig a cavern to go salvage the broken equipment to try to make a UFO to escape. It’s heavily implied a Thing can revert back to anything it’s infected before so it can be assumed that Blair Thing may have become a monster to help dig out the cavern faster.

But why? He surely wasn’t going to get that ship out of the basement and fly out?

I can’t remember enough of the details of the plot to answer your exact question, but if you haven’t seen it before here’s a great short story by Peter Watts written from the alien perspective. 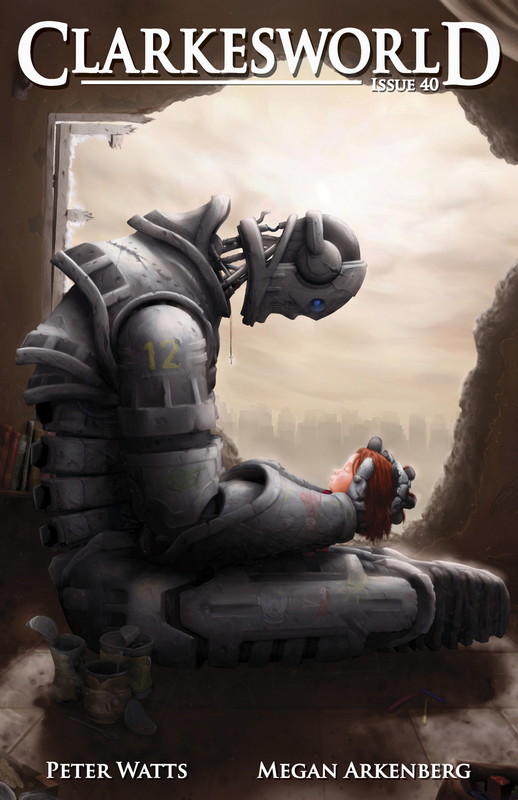 Clarkesworld Science Fiction and Fantasy Magazine and Podcast. This page: The Things by Peter Watts

I read that years ago and never forgot it. An excellent story! Thank you!

But why? He surely wasn’t going to get that ship out of the basement and fly out?

Plan A was to secretly assimilate one (or all) of the base crew and presumably escape in the Spring once normal operations resumed.

Once detected, the next option was Plan B - kill or assimilate the entire crew before they killed every instance of the Thing and wait for the rescue party in the Spring.

With MacReady blood testing everyone else at the point of a flamethrower and Blair-thing locked up and under suspicion, it was highly likely they would detect and kill every instance of the Thing. So that left Plan C - escape in the home made ship.

As it happens, we don’t know if any of those plans worked!

Blair was infected by somebody else at some point (Palmer or Norris) and was stuck in that shed for more than 48 hours iirc.

I’ve wondered over the years if Blair got infected doing the autopsies, maybe a bit of blood got on his arm or wrist (his surgical gloves stop right at his wrist).

^ This.
Doesn’t Blair do something stupid like touch some forceps or something to his lips during the autopsy? 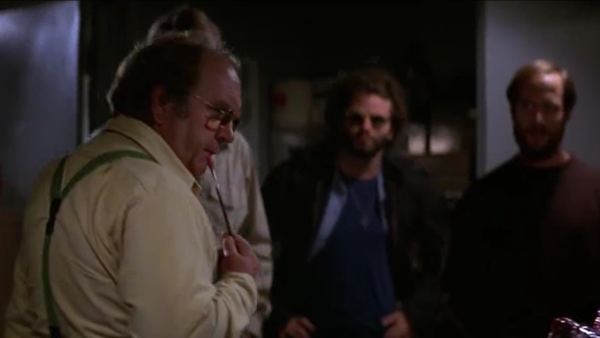 It is never established that casual contact can result in being Thinged. The Thing never takes that approach that we see; it attacks people with tremendous violence to Thing them.

they go up to give him the blood test and he’s just gone. And he was somehow making a spaceship in the basement

If I recall from the original story Who Goes There, it was an alien flying device that would have been used to get to the mainland, rather than a true spacecraft which it could presumably used to leave Earth. A large focus in the original (and still in the movie of course) is that the alien could convert most of the population of Earth within a few years.

Thus they destroy their own vehicles and even kill the birds they spot ASAP to prevent the alien from having the means to leave the base.

As to how it built the saucer/flying device with Earth tech in short order ( in a week according to the original story ), well, that’s one of the tropes of the genre.

True, but the exposition of how the Thing works on a cellular level supports at least the possibility. Didn’t Blair or one of the other scientists suggest they eat only canned food, and everyone prepare their own meals? Why would that be necessary unless casual contact with suspect/contaminated bodily fluids wasn’t at least a hypothetical danger?

I’m not saying definitively that it’s one thing or the other, but my gut is that Blair accidentally Thinged himself by casual contact with Thing-contaminated fluids while doing the autopsy on either the Dog-Thing(s) or the split-faced-Thing, brought back from the Norwegian camp.

Didn’t Blair or one of the other scienti

Maybe they were worried about being knocked out or incapacitated so it could copy them? That’s just a wild theory though.

Refresh my memory: Are we sure that what it was working on in the basement was a vehicle? Did we see it moving (or attempting to move) under its own power? It was alien tech, of course, but maybe it was alien tech to do something else, like a weapon to fight back against flamethrowers (so it could then infect the rest of the scientists and go back to Plan A).

True, but the exposition of how the Thing works on a cellular level supports at least the possibility. Didn’t Blair or one of the other scientists suggest they eat only canned food, and everyone prepare their own meals?

He does, but we don’t see that happen. We are left unsure as to the range of the Thing’s capabilities, the extent to which it’s sapient… we don’t even know if a Thingified person knows they’re a Thing until it’s time to kick ass. We don’t, in fact, know if the ship in the snow is The Thing’s spaceship, or if it Thinged the aliens who previously owned the spaceship.

Personally I don’t see this uncertainty as a bug. It’s a feature. The Thing is just a… thing, a total antagonist.

Refresh my memory: Are we sure that what it was working on in the basement was a vehicle? Did we see it moving (or attempting to move) under its own power?

It’s never said for sure, but its shape and appearance certainly suggest a vehicle, and it kinda looks like a mini version of the ship we see crash a hundred thousand years ago.

Which of course raises the question: if Blair had a break from finding out about the Thing, would the copy likewise be upset? Or all of his rage and sabotage was the Thing putting a plan into action, I guess.

It’s never said for sure, but its shape and appearance certainly suggest a vehicle, and it kinda looks like a mini version of the ship we see crash a hundred thousand years ago.

The vehicle that the Blair-Thing built is never shown in full view and it clearly isn’t complete but as it is improvised from materials and equipment in the base it is unlikely to be capable of flying into space. The implication is that it is some kind of vehicle to fly or travel over snow to McMurdo and from there transfer to other populations. The characters of the film never really divine the purpose of the Thing but this scene makes it clear that it isn’t some kind of dumb animal or bioweapon that was on the crashed spaceship; it is capable of both complex mimicry (perhaps acquiring a subject’s memories somehow) and technological sophistication, so it has a plan.

As for how Blair got infected, I’m inclined to believe that it was via the forceps; it is such a weird thing to do (especially for a trained biologist who is presumably well versed in dissection) that it seems like a deliberate clue, and John Carpenter is a very detail-focused director. One of the characters (I forget the name) was bitten by the dog under the table and later became a Thing, so it is clear that it only takes a small amount of fluid transfer and some time for the Thing to subsume a subject. It isn’t clear how much it even has to replace of the original creature; the infected humans all look normal before they start busting out in tentacles and whip-tongues and so forth so the Thing can clearly reshape biological tissue at will.

And we never see how it got to Bennings (the red haired guy who was shot) at all, just a moment of it almost finishing the job. And he didn’t seem to leave behind any torn clothes, come to think of it.

The implication is that it is some kind of vehicle to fly or travel over snow to McMurdo and from there transfer to other populations.

That’s kind of what I assumed, but then we don’t know for sure, nor can we know it can’t go into space. The Thing’s technical capabilities are not known to us.

One of the characters (I forget the name) was bitten by the dog under the table and later became a Thing,

No, the dog-thing never bites anyone. It just brushes against Bennings, startling him. However, we later see Bennings being forcibly Thinged - that’s when Windows see it happening, and runs away, telling the others “It’s Bennings!” and they end up killing the Bennings-thing out in the snow. 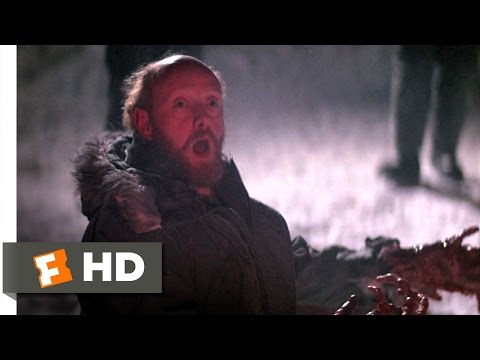 So the dog didn’t Thing anyone in the under-the-table scene or else Bennings didn’t need to be forcibly Thinged later.

So is anyone, in fact, Thingified by casual contact?

I think so, but can’t know for sure. We don’t really know with Blair; while he did touch Thing cells and we’re later told some of the cells are still alive, it’s Blair who figures that out. Blair is isolated and could have been forcibly Thinged by another Thing later. For some time into the movie, remember, Blair takes actions clearly motivated towards STOPPING the Thing; he smashes the comms equipment and destroys the helicopter, so that the Thing can’t get away from Outpost 31. He’s working against the Thing at least up until they lock him the shack. So he’s not Thingified until after he is isolated, which strongly suggests he is Thingified by force inthe shack, and at least several possible Things have the opportunity later to go get him.

Obviously, the following men cannot have been infected by casual contact:

If that is true, then for some early period of the movie there are two routes of infection. One is the corpse goop that gets Bennings, which is halted, and one is a continuous route of infection that started with the dog.

I think Norris is one of the first men infected, but I think the dog got him. My belief is that Norris is the guy whose shadow turns to look at the dog early in the film; the silhouette (which isn’t any of the actors, btw) looks like Norris. The dog gets SOMEONE in that scene, and I cannot see how it’s anyone but Norris or Palmer, and I don’t think it’s Palmer. But that is probably also a forcible Thingization. But maybe not. Palmer rooms with Childs, and has at least one opportunity to Thingize Childs - remember when they’re sharing a joint? - but cannot have taken the opportunity, because Childs later passes the blood test.

However, it is also possible Norris was previously infected by casual contact - remember, the dog licks his face earlier. Maybe the silhouette scene is two Things meeting.

It’s been said a million times, but that dog really did a great job.