Hearing professors lecture, and watching a few documentaries have lead me to discover a few things about Thomas Edison. For example, we had electric light long before Edison “invented” the light bulb. He just discovered the filament needed (Joseph Swan got the patent first). He ripped off Nikola Tesla for lots of money, and killed animals to make AC power look bad.

My question is, are there any other things about Thomas Edison that you won’t find in most history books? Secondly, why does he get credit for the light bulb, while Swan fades into obsurity? Learning what I have, I’m just curious.

Edison may not have liked AC, but he loved PR.

I thought it was DC that Edison was opposed to.

Not to get too off-topic, but why would Edison be opposed to either type?

Death and Money: The History of the Electric Chair

Edison was the DC guy, he fried critters to demonstrate how unsafe Westinghouse AC was.

Edison was in competition with Westinghouse. They were backing AC, while Edison was backing DC. Naturally, Edison (with General Electric) wanted Westinghouse to fail.

Edison owned patents for DC transmission systems. He wouldn’t make as much money if everybody in the US got wired with AC. Apparently, Edison liked the concept of enriching himself more over the inconvenience of DC.

He understood the processes of commercial development far better than some of his rivals, many of whom had a better grasp of the fundamental research or scientific theory, but no business sense. Which is no small thing. What he REALLY invented was the modern industrial R&D process. He turned research from a cottage industry by an individual tinkerer into something turned out by a research laboratory. Indeed, many of the inventions we associate with him came from his organization, not him personally.

For little known things, you might look up his experiments with goldenrod as a source of rubber. He had plantations in florida cultivating the stuff.

At the Henry Ford Museum, you can see the test tube holding the last breath of Thomas Alva Edison. Weird, yes -- but well worth the visit.

Tim Powers used “Edison’s Last Breath” as a device in one of his novels.

Edison himself had a certain amount of belief in spritualism, which wasn’t entirely uncommon in his day, even among scientists like William Crookes. Edison supposedly tinkered around trying to concoct a device to talk to the spirits of the dead.

You are right about there being a war between Edison and Tesla over AC/DC and even though Tesla won he did not get the credit he should have.

Swan demonstrated a working lamp of the design seen to the left in several early 1879 lectures. But his lamp (like those of the other contenders) used a carbon rod of relatively low electrical resistance. It was practical only if used in series (where the current flowed successively through several lamps that would turn and off together) or if it was close to the power supply (so that the lead wires would be short).

Actually Edison didn’t invent the idea of the light bulb, he just invented the filament that would make using light bulbs practical.
So he is responsible for the light bulb being available to the public, Swan was not.

Why then is Edison generally credited (outside Britain) with inventing the light bulb?

Like other early inventors, Swan used a carbon rod with low electrical resistance in his lamp. Due to the relationship between resistance and current, a low resistance element required lots of current in order to become hot and glow. This meant that the conductors bringing electricity to the lamp would have to be relatively short (or impossibly thick), acceptable for an experiment or demonstration, but not for a commercial electrical system.

Made from an arc-lamp element, Swan’s carbon rod gave off light but did not last very long. Gasses trapped in the rod were released when the lamp was activated, and a dark deposit of soot quickly built up on the inner surface of the glass. So while Swan’s lamp worked well enough for him in a demonstration, it was impractical in actual use.

Edison realized that a very thin “filament” with high electrical resistance would make a lamp practical. High resistance meant only a little current would be required to make the filament glow and allow much longer copper lines of modest size to be used. Edison’s Bristol-board lamps of December 1879 lasted about 150 hours, and his bamboo lamps of early 1880 lasted 600 hours.

It is for this realization about high resistance, and for his conception of the lamp as only one part of an integrated system, that Edison is generally credited with inventing the first practical incandescent lamp.

Obviously, I don’t know my AC from a hole in the ground. Thanks, for straightening me out, all.

BTW, Roadside America also has a good account of the “Topsy the Elephant” electrocution: 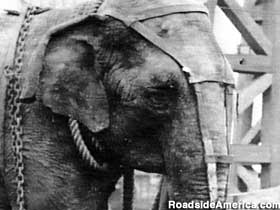 In the Coney Island Museum, a memorial tribute to an electrocuted elephant. Also: a display of funhouse mirrors.

If memory serves (it still does, occasionally), GE arose from the ashes of the original Edison Electric Co.

and, where did the Edison’s still around come from?

*Originally posted by yabob *
What he REALLY invented was the modern industrial R&D process… Indeed, many of the inventions we associate with him came from his organization, not him personally.

Know any examples? I’m interested to know what he actually did himself.

I think the Invention that shook his world was when Edison announced that he could record and reproduce human speech.

This was incredible to his contemporaries, and outside his feild really, which wasn’t really mechanical invention until then.

Many of science’s leading lights of the day (including Edison enemy A. Graham Bell) when hearing about the talking machine, pronounced it a fraud and a hoax, Thorized that maybe it was done by a concealed ventriloquist.

(This is me ripping off a biography of Edison) There existed conceptual barriers to the men of the day which made the feat seem more difficult than it actually was. It may have been no more than the concept that sounds are transitory & him changing that.

In any event, this is discovery more than any other in his lifetime, which made him a “Wizard”, and appear larger than life until this very day.

Know any examples? I’m interested to know what he actually did himself.

The first one that springs to mind is the kinetoscope (motion picture camera). Much of the work was done by associate William Dickson.

The carbon filament light bulb was actually produced by an Edison associate named Lewis Latimer. Edison’s prototype used a paper filament which burned out much too fast.

From A national leader in advancing invention education | Lemelson

It must be said that Edison’s career would have been less stellar if not for his research teams, and that Edison used other inventors’ ideas — acknowledged or not — much more freely than he shared his own. For example, Edison’s quadruplex telegraph was anticipated by Bell employee Granville T. Woods’ “multiplex” system; the so-called “Edison Effect,” the observed emission of electrons from a hot filament, was actually discovered by an Edison engineer named William J. Hammer (1883); the carbon filament light bulb was originally invented by one of “Edison’s Pioneers,” Lewis Latimer; the wax cylinder phonograph was first patented by Chichester A. Bell and Charles Sumner Tainter (1886), whose offer of a joint venture Edison spurned; the disc “gramophone” was first patented by Emile Berliner (1887); the film camera was invented by Edison’s colleague William Dickson; and without George Eastman’s cinematic film, “Edison’s” movie camera might have remained a curiosity. In fact, Edison lost more patent lawsuits than he won.

I don’t mean this to knock Edison any more than that site does, either. He was the motive force behind a lot of the stuff - it was HIS research lab, after all, and he was undoubtedly a very “hands on” manager and called the shots when it came to what he wanted his staff to be doing.

GE - from the history on GE’s site:

By 1890, Edison had organized his various businesses into the Edison General Electric Company. The Thomson-Houston Company and the various companies that had merged to form it were led by Charles A. Coffin, a former shoe manufacturer from Lynn, Massachusetts. These mergers with competitors and the patent rights owned by each company put them into a dominant position in the electrical industry. As businesses expanded, it had become increasingly difficult for either company to produce complete electrical installations relying solely on their own technology. In 1892, these two major companies combined to form the General Electric Company.

Thanks. That helps a lot.

Why doesn’t someone read the whole thread, instead of going off on your own tangents?

Edison had one huge but little remembered failure–he came up with a method for producing iron from low grade ore, but no matter how much money he pored into the venture over a decade of development, it never proved economical. See Edison’s Big Failure or more details.