Considering how often superheroes lose their powers I would think they’d all want to get fighting lessons from Captain America.

It was a regular thing in old-time Avengers comics to show the team being put through their paces by Cap.

Same with Batman in DC. I remember an old story in which Superman lost his powers but was still able to fight because Batman had taught him how.

On occasion, when he’s actually been in need of a shield, Thor has spun Mjolnir rapidly to create a shield-like barrier. 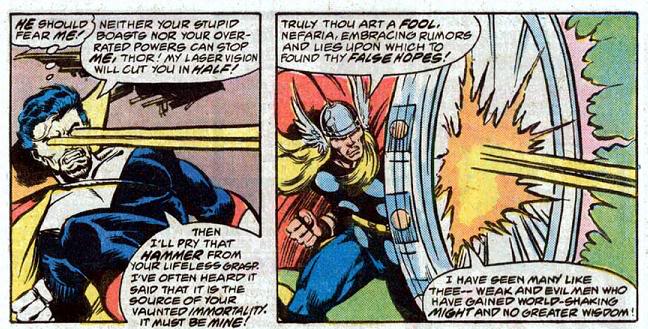 As I understand historical fighting, from HEMA personalities on YouTube, there is no historical thing like a “bracer” nor independent vambrace. In general, if you wanted to have extra protection then you would carry a shield or you would wear armor. Similarly, the leather wrist wraps that Hollywood movies like to put on their actors in medieval and ancient set pieces also seem to have no historical basis. For example:

The closest equivalent to what we see in comics would probably be the lantern glove which is, as the name gives away, a full glove. After all, why wouldn’t you protect your hand if you’re planning to use your arm as a shield?

The lantern shield is a small shield combined with a lantern used during the Italian Renaissance (15th and 16th century Italy) especially for nighttime duels. A number of specimens survive. Their defining feature is a small circular shield – a buckler – combined with a lantern, or a hook from which to hang a lantern, intended to blind the opponent at night or in duels fought at dawn. Some more elaborate examples might incorporate gauntlets, spikes, sword blades, and also a mechanism to alternati...

While it’s just fanwank, my excuse (and it is no more than that, an excuse) is that with the . . . energetic way he swings the hammer or rotates it via the strap, the off hand is normally just being used as a counterbalance. It’s almost always held back, opposite of the swinging arm in the most dramatic pose possible.

@Pavelb1 - more geekisms, but prior to the last few reboots and of course the MCU, one of the ways Thor would win against the Hulk is that he cheats. To be specific, he has a number of magic items that enhance his performance beyond his already godly nature. From the Handbook of the Marvel Universe (Dec 1986) he is known to have a magical belt that can double his already prodigious strength, although it leaves him fatigued after use.

Combined with countless years of actual warrior training, this allows Thor to go toe-to-toe with the Hulk who is essentially a brawler. However, I wouldn’t want to try it against versions of the Hulk like Maestro who combine the classic Hulks savagery with substantial intellect (and probably training).

A more realistic defensive option would likely be the Roman Manica, possibly combined with a galerus (a tall shoulder guard), seen frequently in various gladiatorial frescos (and movies of course) would be more along the lines of a true defensive armguard, and less ‘gimicky’ than the lantern shield. Since it’s segmented plate, its still not going to provide the deflection of a solid shield, but when you’re talking about beings as powerful as Thor, it’s magic all the way down anyway.

For a standalone piece of forearm armour, this is very much a modern usage arising out of the reenactment/LARP/Rennfair community, where that kind of accessory is quite common. There’s no evidence for this kind of thing as standalone armour in the Viking period (nor, indeed, the rest of the Middle Ages). The closest things would be the splinted forearm parts of full panoplies of Byzantine armour that some Varangian Guard might plausibly have worn.

In any event, I’ve only ever seen or heard “vambraces” used in highly technical discussions of armor, while I’ve seen and heard “bracers” used in pop culture discussions to mean “forearm armor”

I’ve been listening to the audiobook of The Lord of the Rings. Tolkein properly names the item that is placed under the stricken Eowyn’s nose to see the vapor from her still breathing as a “vambrace”. I don’t think I ever really noticed that they stuck a piece of metal armor under her nostril to act like a mirror to catch her breath before, and wouldn’t have, were it not for this thread.