He’s got a short hammer that he USUALLY uses one-handed. Why the #### does Thor not have a shield?? Or if that just seems too odd to picture, at LEAST some kind of bracer on his other arm. It’s not like Thor swings his hammer and then punches his opponent (usually).

No, usually he just goes in and swings his hammer one handed and the other arm is doing nothing. Now granted Mjoliner can do all kinds of shit, but at least wear a bracer Thor. You never know…you might get that off hand or arm cut off, or lose an eye. Oh, whats that? That shit happens all the time? Told you.

This no longer really applies to MCU Thor. Stormbreaker looks to be used more two-handed.

I suspect a nigh-invulnerable god would find a shield pretty useless about 99% of the time. It’s like saying “why doesn’t Superman use a shield?”

(No doubt someone is going to post a picture of Superman using a shield.)

Well, naturally. This is the Straight Dope.

Not just Supes with a shield, but with Mjolnir as well:

Every Superman fan would have wanted it to happen(at least this generation fans as they saw the power of Thor’s hammer in Thor 1,2 and Avengers movies). Needless to say about Cap’s Shie…

Yeah but Thor often goes up against folks who can do him grievous harm and maim him badly. Hela, Fenris Wolf, Uhhh…Im not gonna look it up…Jormsgaredder world serpent thingie.

Weirdly, while Thor can go toe to toe with Hulk and usually win…Thor doesn’t have nearly the healing factor Hulk has. Thor has lost an eye, arms, hands…etc…Hela tore half his jaw off once…

I understand his hammer has abilities to hold beings at bay, but even when he knows he’s going into battle with a boss,as opposed to a bunch of mooks, he still plunges in willy-nilly.*

*Now he DID forge some battle armor once, but that was forced upon him by a curse wherein he was fragile and couldn’t heal…man im gonna go back and read that Simonson run.

The hammer wasn’t just a weapon in old Thor stories, it’s what turned frail Dr. Blake into a god. If Thor was separated from his hammer for more than 30 seconds (I think) he turned back into Dr. Blake. And the shield gimmick was already taken.

I’m looking into the history of Thor losing body parts and Mjoliner…and sure enough, Jane Thor Foster has a bracer. {And a helmet!!!}

The short answer is because the mythological Thor didn’t have a hammer. He had Mjolnir. Also lightning.

Mythological Thor was a brutish dummy. He’s an attacker, a killer, a slaughterer. He’s not the kind of fella you’d expect to be hunkering down behind a shield.

So there’s your genesis of the character.

The simple comic book answer is because Captain America not only has a shield, but he has the most iconic shield in all comicdom. Giving one to Thor for any reason other than special occasions would be diluting their own brand.

Interestingly the animated show What If has a short brawl with Captain Marvel that shows him fighting with it pretty well, including a slick Winter Soldier-esque drop from one hand to the other. He does use one arm to block punches I believe. Did the Vikings ever use bracers? Or hammers to fight, come to think of it?

He’s got a short hammer that he USUALLY uses one-handed.

Actually, in his first appearances, Thor’s hammer had a much longer handle. They shortened it with time. with its first appearance in Journey into Mystery #83 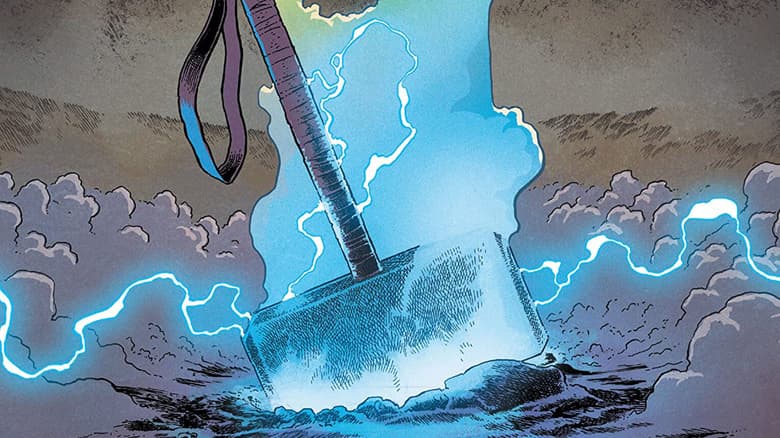 Thor and the Mighty Wielders of Mjolnir

Meet some of the heroes who have proven worthy of Thor’s hammer! 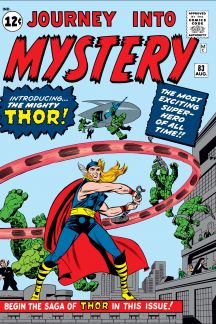 Browse the Marvel Comics issue Journey Into Mystery (1952) #83. Learn where to read it, and check out the comic's cover art, variants, writers, & more!

Did the Vikings ever use bracers?

Maybe the archers. Big maybe. Not that we have any physical, pictorial or textual evidence of that. But an ordinary húskarl? Naah.

A bracer protects an archer’s arm from whipping. How would a bracer be of use to a hammer-wielding arm? And images show Jane holding the hammer in her right hand with some arm protection on her left. What would be the purpose of that? If it’s to protect her from blows, isn’t that armor rather than a bracer?

I guess im misunderstanding what a bracer is then. I thought a bracer was forearm armor on the off-weapon arm to use in place of a shield.

In real life, technically speaking, a bracer is a piece of protective equipment sometimes used by archers to protect their forearm from whipping by the bowstring. A vambrace is a piece of armor worn on the forearm, typically as part of a suit of plate armor.

However, the term “bracer” is used far more often in popular culture to refer to forearm armor. For example, I’ve never seen Wonder Woman described as wearing vambraces, but a lot of references to her bracers, which she very definitely uses as armor and for parrying weapons.

I think you may be thinking of a buckler - a small shield which can be strapped to the forearm.

I thought they were called bracelets?

A Google search on bracer “Wonder Woman” brings up 147,000 hits, almost all on bracelets, except for cosplay costumes, which call them bracers. bracelet “Wonder Woman” gets 3,320,000 hits.

I’ve never seen them referenced as bracers before, but I’m not in the cosplay community and they may have adopted a specialized use of the word.

So definition 3 and 4 are both OK.

I thought they were called bracelets?

A Google search on bracer “Wonder Woman” brings up 147,000 hits, almost all on bracelets, except for cosplay costumes, which call them bracers. bracelet “Wonder Woman” gets 3,320,000 hits.

I’ve never seen them referenced as bracers before, but I’m not in the cosplay community and they may have adopted a specialized use of the word.

I was probably conflating “bracer” with “bracelet” in my memory of discussions of Wonder Woman. Still never heard them referred to as vambraces, though. Also probably a big part of the conflation in my mind is D&D’s “bracers of defense”, which in my mind anway are pieces of forearm armor, not forearm sheathes used by archers (although “bracers of archery” does seem to indicate the creators were thinking of that use of the word when they named the items…).

In any event, I’ve only ever seen or heard “vambraces” used in highly technical discussions of armor, while I’ve seen and heard “bracers” used in pop culture discussions to mean “forearm armor” (at the very least, I know I’ve used the term that way myself - @Pavelb1 isn’t the only one).

Considering how often superheroes lose their powers I would think they’d all want to get fighting lessons from Captain America.

So an iconic shield and iconic bracelets were already taken by the time Jack Kirby drew Thor. Thor had the hammer; Kirby would be stupid to waste another accessory on a single character.