Yes, that’s my call as well - specifically an American goldfinch. Note the hint of black on the forehead.

That’s an American goldfinch. It shows more white on it’s back when the wings are folded than a yellow-headed blackbird. It’s small, and it has the black forehead as @Tamerlane noted.

Looks like a goldfinch to me too. They are active this time of year, with the males doing mating displays.

Well, it’s pretty, whatever it is!

The bird was indeed small (hard to tell in the picture), so I think that is the answer. Plus, the goldfinch range (from Tamerlane’s link) easily includes Missouri.

Thanks again to all.

I remember watching in amazement the constant war between ravens/crows and magpies from my terrace in Brussels: Both lived in the parc/schoolground/churchyard in our line of sight, on different trees. There were more magpies than raven, the latter being outnumbered 4 to 6 against 10 to 20. The fights were magnificent displays of tactics and acrobatics, that is how I imagine the dogfights in WWI, only with more tactics and lasting longer in the case of the birds. They could battle for hours. The magpies always seemed to me to start the fights, and usually seemed to be winning too. But the raven never were driven away, so the defeat, if a defeat it was, was not crushing enough.
Wondering why the magpies seemed to loathe the raven so much I guessed that they were afraid they would rob their nests. OTOH, both birds do that, I believe. Maybe they knew both from experience and introspection.
But what I saw today in nature? I will reveal a secret here: My wife and me have just bought a swamp. Really, not kidding, 1.34 acres of bog, pure morass. The correct term for that kind of marsh in German is Erlenbruchwald (link to German Wikipedia). A moor where alder (German: Erle, thus the name) grow until they fall, because the ground is not solid enough for tall trees. Then they rot. I might start another thread about this place, we are looking forward to getting bitten by mosquitos, falling into ditches, escaping from wild boars, the kind of things you do in fens and mires and muskegs and so on.
And what did I see? First, dryness. All the ponds and draining ditches etc. we saw just one month ago, when we bought it, are dry. The nearby lake, the one we should never reach because it is too swampy on the way there, is reportedly 50 cm lower than usual at this time of year. That is a lot when you consider that lakes around here seldom are deeper that 2 - 3 m, if at all. That the surface is dry and the frogs are gone does not mean that you cannot sink 2 to 3 feet all of a sudden. I almost lost my Wellington Boots!
Second, we saw garbage. We knew that, we went today with several big plastic bags (yeah, I know…) to collect all the plastic, bottles, plastic sheets, shoes, plastic ducks, cans, plastic flower pots, etc. etc. etc. we could gather in a couple of hours. It was a lot. It made little difference. There is a task for the next weeks and months.
But that is OK with us, as cleaning the place is about the only activity allowed there. It is an official Biotop, something like a reserve. Proud to have one now. We probably do not know what a mess we are getting into.

Thank you, I gladly will. What do you think, is it better to post here every now and then, with some occasional pictures, or should I start a new thread? Or a mix of both?
For a start, images of the same spots three weeks ago and today, two and two, from slightly different angles. Click on the picture to see all four: 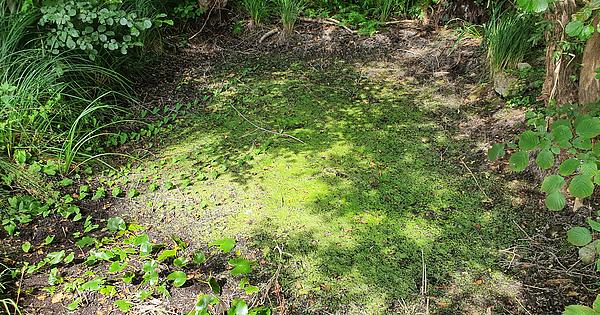 What do you think, is it better to post here every now and then, with some occasional pictures, or should I start a new thread? Or a mix of both?

If only there was a thread that was created for a discussion of specialized habitats!

Feel free to substantially take it over. I would very much look forwards to that.

That is a perfect solution! I will post the same picture for a start, I remember having been in that thread commenting that I liked it but that I had nothing to add. Well, now I have, right?
Thanks, Treppenwitz!

You are very welcome! I look forward to seeing the story develop.

I wonder if this is a vernal pond that often dries as summer wears on or usually a permanent pond, now dried out because of the heat of climate change.

It’s awesome that you own this Pardel-Lux. Yes, the upkeep will be an issue, both a pain and a joy to handle. I have selected to follow @Treppenwitz thread to learn more.

There are, or rather were several ponds on the part that we have walked through so far. The one in the photos was the only one were water lentils grew. They are still alive, they are the green mat on the dry pond, where you see a vine crawling along, but it seems to me they will not hold on for the whole of August if it does not rain a lot. It is still moist enough for them, but that is not the way they like it. (BTW, a vine crawling along instead of climbing does not look happy either). The other ponds did not have the water lentils, so I guessed that one was more permanent, and still it’s drying out. It was the only pond where a frog jumped into the water once when I came close (I’ve only been there four times). The frog was not seen today, I guess it has migrated to the nearby lake. Or it was sleeping (it’s very hot here, 38°C today). Or it got eaten by a bird (have seen two I did not know before already!). I think there is a lot to learn here indeed. I plan to buy a motion sensor activated camera with night vision. Wonder what those tracks are…

That is beautiful! Looking forward to updates, wherever you post them.

I spotted this jewel during my morning walk. It was under the edge of a rail fence surrounding a pond. I believe it is Drosera brevifolia. A carnivore about the size of a quarter. It must feed on pollen and airborne debris because it doesn’t seem to have caught anything large enough to see. 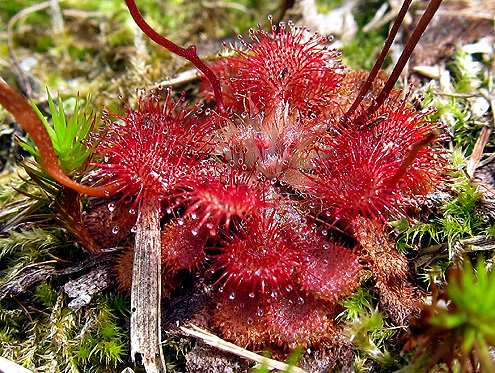 Let’s see if I did this right: