Trip to the Everglades

Wife & I are taking a trip to Miami in a couple of weeks and would like to visit the Everglades. Can anyone provide recommendations or anecdotes about what to see or avoid? Any particular tour or tour operators that you would recommend? What about clothing/bugs (wife is highly allergic to bites), etc? Thanks.

I took the tour offered by the Park Service at the Shark Valley Visitor Center. I liked it. There is an old road (built by some industry that used to own the land) that goes into the park, and they run tram tours on it… the road is otherwise used only by hikers and bikers. IIRC, we went in February… it was relatively dry, but there were gators everywhere, just lying by the roadside. (I believe that’s not always the case.) At the innermost point is an observation tower which is kind of nice because that’s where you get a sense of the hugeness of the park. (At ground level, the terrain didn’t look all that different than other wetlands I’ve been in.)

That’s the only time I’ve ever been to the Everglades so I don’t know how my experience compares with others, but I enjoyed it.

I don’t recall any problems with bugs at that time of year, but this is Florida we’re talking about, so I would certainly recommend being prepared.

Pick up one or 2 of Matthiesen’s Mr. Watson’s books. IMO, the first is probably the best. Might let you see the area through different eyes.

We have a mosquito outbreak right now. Gear up for that.

This tour is popular: 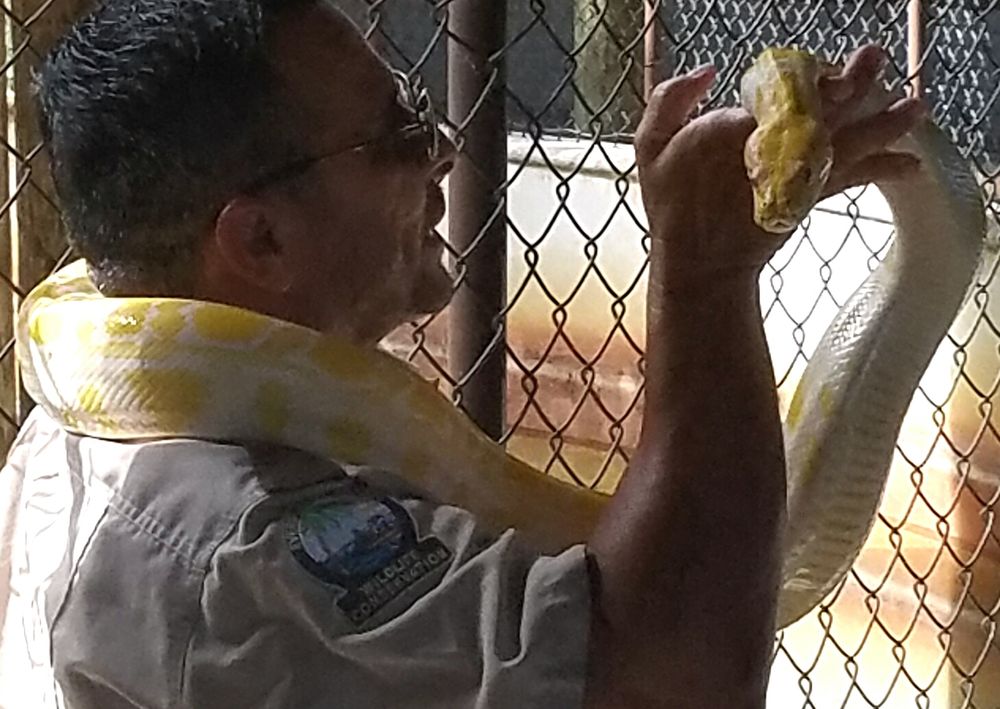 Specialties: Visit the Florida Everglades' premier and most complete airboat attraction. Everglades Safari Park has a modern fleet of airboats of all sizes, capable of accommodating singles, couples, families, and large groups. Explore…

We took a quick trip into Everglades last March. The first visitor center was amazing. The middle stops less so. We didn’t have enough time to get all the way to the end of the road because we had a plane to catch, but it also looks like it would be a great place (Flamingo something?) We didn’t have a tour or anything like that and we had a great time just walking around and looking at stuff.
Next time we are in south florida we plan to go again and devote more time so we can see more and get deeper into the park.

We did Shark Valley too. We did it in June so we didn’t see a lot of critters (hotter weather = more water = animals more spread out) but we did see lots and lots of flowers.

IIRC, Shark Valley is near the Miccosukee Indian Reservation. They have a casino there (we stayed at the hotel), but what you want to do is take an airboat ride with a Miccosukee Indian guide. They are allowed to hunt the gators for food, so they can get Right Up Close to them. Our guide fed them from the boat and even pulled into a small landing area and dragged a smallish gator up onto the bank so we could see it. The reservation has a small gift shop and a re-enactment camp.

I used to live in south Florida, and I would always take people to the Anhinga Trail. It is close to Miami, it is short, and it has tons of wildlife. There are alligators all over the place, as well as birds, turtles, and lots of other stuff. I saw an otter there once, which is fairly rare.

The options deeper into the Everglades are good if you want to see a sea of grass. Not many animals can be seen, just miles of grass. There are also more touristy options, but that’s not my style.

When I went I was astonished at how close you could get to the alligators if you’re not watching where you are going. They were just a few feet off of the walking path in a few instances. There were also folks walking around casually holding their toddlers’ hands. :eek:

The guide said not to worry, they only eat once a month (?). This prompted me to wonder aloud how we know if it is a particular gator’s time of the month or not.
mmm

When I went I was astonished at how close you could get to the alligators if you’re not watching where you are going. They were just a few feet off of the walking path in a few instances.
mmm

Yea, when we were there you could pretty much sit on the alligators if you were stupid enough.

Gators don’t really eat at times when visitors are out and about. They tend to feed when the sun starts going down.

Don’t be in the park when the sun starts going down. Don’t get between a gator and the water.

Airboat rides are fun for the first few minutes, then they’re really loud and the scenery is not dynamic. Longer rides aren’t necessarily better.

If the bugs are going to be heavy, do not fuck around with your bug spray. Use something with DEET in it.

Gators don’t really eat at times when visitors are out and about. They tend to feed when the sun starts going down…

Qualifying this statement with phrases such as ‘don’t really’ and ‘tend to’ isn’t exactly reassuring.

Qualifying this statement with phrases such as ‘don’t really’ and ‘tend to’ isn’t exactly reassuring.

I live close to what is (according to the literature) the highest density of gators on the continent, and it’s an extremely popular visitation spot. I’ve never heard of an attack. They really are a bunch of lazy fatties during the day. You have much better reason to be terrified of the occasional bison that wander up onto the trails to use the concrete benches as scratching posts. Those fuckers will kill you dead.

I’m heading down soon, and I’m already there, sorta… I’ve been reading books on Florida, about Florida, and set in Florida.

From history and ecology (“The Everglades: River of Grass” by Marjory Stoneman Douglas) to 60’s pulp thrillers (any of the Travis McGee books by John D. MacDonald, reading “Orange For The Shroud” now) to absurdist fiction (anything by Carl Hiaasen, but most recently “Chomp”, one of his Young Adult books).

It’s extending my vacation, because my mind got to Florida weeks before the rest of me.

Airboat rides are fun for the first few minutes, then they’re really loud and the scenery is not dynamic. Longer rides aren’t necessarily better.

If the bugs are going to be heavy, do not fuck around with your bug spray. Use something with DEET in it.

If the skeeters were just a little bit bigger, they could eat the gators! Have fun!

Everglades by The Kingston Trio

Another vote for the Shark Valley experience and one bit of advice: Don’t ever pick up a baby alligator. They will give a very distinctive distress call and Mama Gator will come to protect her baby and she won’t settle for you putting the baby back on the ground. Another piece of advice: Don’t think you can outrun a gator; you can’t. Of course it’s odds on that you won’t have to try; attacks on people are extremely rare.

I enthusiastically 4th or 5th the endorsement of the Shark Valley site. My experiences:

First, as a single guy visiting my sister in Florida years ago, I took a trip there and rented a bike to take the trail (it’s a 15 mile loop with the aforementioned observation tower at the halfway point). The guy who rented to me said “stay at least 6 feet away from the alligators at all times”. And I said “no problem there!” Thing is, as mentioned there are dozens of alligators sunning themselves on the asphalt trail (and one long red snake I saw) so it’s pretty much impossible to stay 6 feet away as you’re riding past. I was amazed that some people were willing to walk it and just step around the gators, not that I probably could have gotten away on a bike either. The gators seem pretty mellow though. The view from the tower, again as mentioned, is really impressive- seeing it go on for miles and miles, and hearing nothing but the wind is amazing.

Then just a couple years ago I took my two kids (chose the tram option this time). The tram is nice, not just because it’s less exertion and less chance of being gator bait, because the tour guide does a nice job talking about the nature aspects and history of the place. And when I tell you you’ll see dozens, if not hundreds of alligators, that’s no exaggeration. The kids got to see two gators fight (over a female probably, the guide said), which was a high point for them. Then, when we got to the tower, we brought binoculars, so the guide pointed out and named to us different species of birds, some rare, that live or stop off in the Everglades.

Most gators will leave you alone as long as you don’t bother them. However, don’t ever get too close to an alligator nest…gators are good Mamas and they will be most irked.

I would imagine staying away during mating season is a good idea too.