The 1964 Heisman Trophy was won by John Huarte, quarterback of Notre Dame. Brian Piccolo, the subject of Brian’s Song, finished 10th in the balloting, despite having led the nation in both rushing and scoring.

Piccolo, however, finished ahead of both Joe Namath (11th) and Gale Sayers (12th) in the Heisman vote.

Joe Theismann’s last name was pronounced Theez-man until college. Notre Dame personnel started pronouncing it as Thighz-man to rhyme with Heisman as a way of promoting him for the Heisman Trophy. It didn’t work.

On November 18th, 1985, Washington Redskins quarterback Joe Theismann suffered a severe compound fracture of both the tibia and fibula in his right leg, during a Monday Night Football game against the New York Giants, when he was sacked by Giants linebackers Lawrence Taylor and Harry Carson. The injury ended Theismann’s career.

Exactly 33 years later, on November 18th, 2018, Redskins quarterback Alex Smith suffered a nearly identical injury during a game against the Houston Texans, when he was sacked by Kareem Jackson and J.J. Watt; Theismann was in attendance at that game. Though Smith’s leg injury, and a subsequent infection, were so severe that doctors nearly had to amputate his leg, after a lengthy rehabilitation, Smith returned to play again for Washington in 2020, before announcing his retirement after that season.

Super Bowl XVII saw Joe Theismann’s Washington Redskins defeat the Miami Dolphins 27-17. The Dolphins’ starting quarterback was David Woodley of LSU. After an NFL career that ended by the time he was 30, Woodley increasingly drank, causing several health problems. At 33 in 1991-1992, Woodley received a liver transplant. At 44, Woodley died from complications due to kidney and liver failure.

At the time, Woodley was the youngest Super Bowl starting quarterback to die. Since Woodley’s passing, only Super Bowl XXXIV starter Steve McNair, murdered in 2009 at age 36 by his own mistress, has died at a younger age.

Steve McNair died in an apparent murder-suicide at the hand of his mistress. He died intestate, that is, without a will. Per Wiki, “On October 15, 2010, it was reported that McNair’s widow went to a Nashville judge and asked that at least a portion of the assets be unfrozen for his children’s care and expenses until the estate matters were resolved in court. The judge agreed and each of the four children received $500,000.”

On June 8, 1948, a farmer was pinned under his tractor in an accident in Rosetown, Saskatchewan. He used his pocketknife to scratch this on the fender of the tractor:

“In case I die in this mess I leave all to the wife. Cecil Geo Harris”

The tractor fender was entered into probate and approved as a valid holograph (handwritten) will.

When the courthouse closed sometime ago, the fender and the penknife were tranferred to the custody of the College of Law at the University of Saskatchewan, where it is on display. 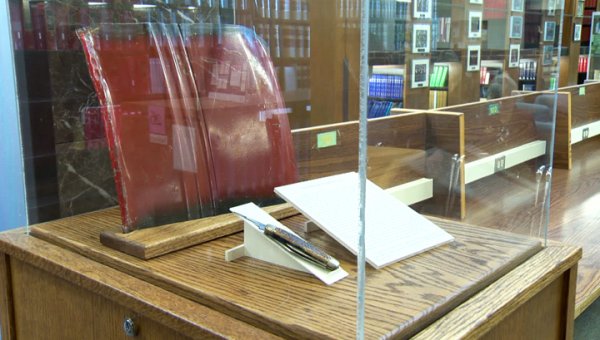 Dying Saskatchewan farmer’s will goes down in history | Globalnews.ca

The story of a Saskatchewan farmer and the infamous tractor fender will told by the last surviving witness.

Which some time ago triggered an SDMB thread with apparently the most unclear thread title ever, judging from the comments of posters:

It’s a famous Saskatchewan wills case: a farmer, trapped under a tractor, scratched his will into the fender with a penknife: The will and the penknife were entered as evidence in court, which granted probate. The tractor fender will has apparently been cited many times in probate cases and texts around the world. The last witness to the events is now 80 years old; at 15, he helped to free the trapped farmer, who died a day later in hospital. The University of Saskatchewan is having a 65t…

Versatile is a Canadian agricultural-equipment manufacturing company, founded in 1966 in Ottawa. The company was the first to produce four-wheel drive tractors that articulated (bent) in the middle of the machine. At one point Versatile had over 70% of the 4WD tractor market.

Ottawa’s Corktown Footbridge over the Rideau Canal is a place where ‘love locks’ are attached. Loving couples will attach a lock to the bridge as a sign of their commitment to love for each other.

In 2019 many of the love locks were removed due to “the amount, placement and clumping of locks.” The city staff was tasked with routine inspection of the locks and the removal of damaged ones.

The bridge with locks:

The name of the city of Cork, Ireland, is an Anglicization of its name in Irish, Corcaigh, which is itself derived from the Irish word for “marsh,” corcach.

The first factory that Ford Motor Company built outside of America was in County Cork, where owner Henry Ford’s ancestors were from. It was in Ballinascarty, County Cork, where the Ford family emigrated from in 1832 after living in Cork for over 300 years. Henry Ford & Son Ltd, the subsidiary of Ford Motor Co., was founded in 1917 in Cork, County Cork, IRL. The Ballinascarty factory took two years to build, and the first tractor rolled off the production line on July 3, 1919.

Today in Ballinascarty there is a Model T Monument.
And also a Henry Ford Tavern.
The two are only 40 yards apart.

Currently, there are 26 county level, 3 city level and 2 city-and-county governance entities in Ireland. Unlike in the U.S., it is customary to put the word “county” before the name of the county, not after, as in “County Cork.”

“Erin go Bragh”, or Éirinn go Brách in Gaelic, is used to express allegiance to Ireland. It is most often translated as “Ireland Forever.” The word “Erin” is an old Irish word for “Ireland.” The second part of the phrase, “go bragh,” means “til the end of time.” So Erin go bragh in Gaelic translates more literally to “Ireland to the end of time.”

The Royal Navy’s dreadnought HMS Erin, built and named at a time when the United Kingdom ruled all of Ireland, is today’s featured Wiki article. Intended for the navy of the Ottoman Empire, she was seized on orders of then-First Lord of the Admiralty Winston Churchill at the outbreak of World War I. She ended up in service for only eight years. For more: HMS Erin - Wikipedia

Christy Moore is an Irish folksinger and songwriter, who was a founder of several notable Irish bands: Planxty and Moving Hearts. Moore’s songs are known for both a focus on drinking, as well as having leftist and Irish Republican content. In 2007, Moore was named as Ireland’s greatest living musician by RTE (the Irish national broadcasting network).

In the Scaled Agile Framework, or SAFe, an RTE is a professional position called the Release Train Engineer. SAFe provides a framework to apply agile methodologies for software development at the enterprise level, for large companies with hundreds of development engineers (or DEs). A ‘release train’ is a concept equivalent to a large software product having any number of DEs. A large company (or enterprise) typically will have multiple products (release trains), and every time an updated version of the software is released to customers it can be thought of as that product’s train leaving the station. The RTE for that product is a manager who provides coordination between executive management above and the team(s) of DEs working on that product below.

“We are uncovering better ways of developing software by doing it and helping others do it. Through this work we have come to value:

Choo Choo Charlie was an engineer.

He was a fan of Good 'N Plenty candy.

In terms of sales, the best-selling candy in the world is Snickers, followed by Reese’s Peanut Butter Cups.

In the United States, the best-selling candy is M&M’s, followed by Reese’s Peanut Butter Cups.

M&M’s were originally produced by a company which was jointly operated by the Mars Company and the Hershey Company – Hershey provided the chocolate for the candy’s production during World War II.

In 1967, the Supreme Court of Canada upheld a decision of the Registrar of Trade Marks who had refused to register “Smoothies” for a candy, because it would be confusing with “Smarties”, produced by a different company.

The Supreme Court of the United States does not permit televised broadcasts of oral arguments before it, although audio recordings are made. It is a perennial issue and will probably come up once more in the U.S. Senate Judiciary Committee’s confirmation hearings for President Joe Biden’s nominee to the court, Judge Ketanji Brown Jackson.