Trump, Giuliani and others sued under Ku Klux Klan law

Congressman Bennie Thompson (D-MS) has sued Trump, Giuliani, Proud Boys, Oath Keepers for inciting or participating in the riot, and attempting to prevent members of Congress from fulfilling their duties. The federal law in question was enacted during Reconstruction to prevent groups like the KKK from trying to intimidate members of Congress. The suit is supported by the NAACP. 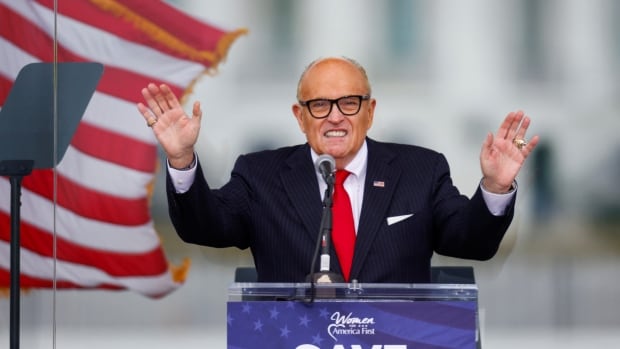 A Democratic congressman accused Donald Trump in a federal lawsuit on Tuesday of inciting the deadly insurrection at the U.S. Capitol on Jan. 6 and of conspiring with his lawyer and extremist groups to try to prevent the Senate from certifying the...

Excellent news. IANAL, but this looks like a very smart lawsuit.

This is a little disappointing.
My reading of OP was that the KKK were suing under one of their Wizards statutes.
I thought “Wow, some of Trumps base really are ticked off”.

As I said in the other thread, I hope they can tag a RICO charge onto this. It’s a very powerful law that’s really been underused.

Okay, this is worth quoting. Here is the relevant section of the Enforcement Act of 1871:

Yes, that is a single sentence.

The members of Congress in 1871 probably weren’t expecting this law to resurface 150 years later, but they really should’ve indexed the fine to inflation.

Don’t get your collective hopes up about this. The laws on this are clear, and c’mon dudes, there’s only one of them:

Consequences for Thee, not for We and certainly never Me.

Power players don’t face meaningful legal ramifications (“Hit me with a fine”). The idea that power players do face consequences is most aptly dubbed an opiate for the masses: a dumb idea that sooths the plebian urge to grab the pitchforks and lets the powers that be continue playing the great game.

He’ll get a slap on the wrist and at most - given some extremely bizarre turn of events - possibly a few months in a luxury prison cell with accommodations that would make the average Appalachian or ghetto kid turn green (assuming the polluted water they’ve been drinking hasn’t already done so).

I will be utterly shocked if there are any serious consequences for this. Remember, they still haven’t found a “suitable” judge for slapping the Flint Water guy’s wrist yet.

Though, come to think of it, I can name one consequence: American Exceptionalism - we can just take that deluded idea out back and put it out of its misery.

Ellipsis was only available to the very wealthy, everyone else quoted in full.

But the output of the western comma mines had flooded the market.

In general, I agree with your argument here, but there’s a unique parameter to Trump’s situation that makes the outcome rather less certain.

Your linked example cites the CEO of a powerful corporation with its own dedicated in-house team of legal defenders. These highly-paid specialists are entirely capable of fending off, or at minimum complicating, any attempt by enforcement officials to hold the company accountable for its wrongdoing.

Trump, by contrast, has alienated basically every reputable law firm in the country. No qualified attorneys are picking up Trump’s calls, and the few remaining existing business relationships are being actively severed. Trump has been reduced to scraping through the bottom of the barrel to find any clown in a power suit who’s willing to stand up in court on his behalf.

The question, in other words, is whether or not it would be possible, in the abstract, to defend against such a lawsuit, absent any other context. The question is whether whatever legal representation Trump is able to muster in a practical real-world sense will be able to mount such an adequate defense.

Good point. What lawyer wants to act for a client who doesn’t follow your advice, is a habitual liar, snd then stiffs you?

And on the other side, it looks like the NAACP is providing legal support for the plaintiff.

NAACP has good lawyers, going all the way back to Thurgood Marshall in Brown.

Not saying this would be an easy case for the plaintiff, but t it looks like serious civil litigation.

And it can’t be stopped by a campaign donation to an Attorney General, the way Trump has got rid of other civil actions brought by government agencies in the past.

Yes, that is a single sentence.

I am so glad I do not have to translate this.

Argh, I left out a word that changes my meaning, and I’ve passed the edit window.

The question, in other words, is whether or not it would be possible, in the abstract, to defend against such a lawsuit, absent any other context.

The question, in other words, is not whether or not it would be possible, in the abstract, to defend against such a lawsuit, absent any other context.

Since this is a civil action, it is not aimed at putting him in jail.

It’s going after something more dear to him: his money.

I don’t know about Giuliani and Trump being guilty under this law. Partly because, as etasyde said above, they are rich white guys. But mostly because of their use of weasel words (for example Trump specifically said on Jan 6 “we will march peacefully”),So it will be hard to prove in court that they incited the riot.Trump could defend himself by quoting his own words.

But it sure seems like this law is perfect for charging those 250 (so far!) people who actually entered the Capitol. And possibly all the others who were outside on the steps pushing to get in.
The law specifically prohibits

“force, intimidation, or threat to induce any officer of the United States to leave any place where his duties might lawfully be performed”

The facts are clear: Your face is on film entering the Capitol , and all the congressmen did leave the place where they were lawfully performing their duties.
What defense is possible against this charge?

It makes a big difference to the standard of evidence required, and whom you have to convince.

I found this on wpedia:

Every person who under color of any statute, ordinance, regulation, custom, or usage, of any State or Territory or the District of Columbia, subjects, or causes to be subjected, any citizen of the United States or other person within the jurisdiction thereof to the deprivation of any rights, privileges, or immunities secured by the Constitution and laws, shall be liable to the party injured in an action at law, Suit in equity, or other proper proceeding for redress, except that in [exceptions].

It makes a big difference to the standard of evidence required, and whom you have to convince.

So for example, let’s say I burn down your house. The state would charge me for arson and send me to prison. You, as the person whose house was burned down, could separately sure me for the cost of your house and possessions that were lost due to my actions.

Generally, you wait until there’s been a conviction in a criminal court because that establishes that I committed the action that you’re suing me for. But it’s not strictly necessary. The O.J. Simpson trials provides a notable example of somebody being found not guilty of the criminal charges but subsequently losing the civil case.

If I am understanding the case correctly, Congressman Thompson is suing Trump and Giuliani for damages he claims they caused him by inciting a riot that interfered with him performing his official duties. I feel that Thompson is attempting to present enough evidence of their guilt in a civil trial that it will then cause the government to take up the case and charge Trump and Giuliani in a criminal trial.