Tv reporter's blog gets her fired. Right or Wrong?

I’m baffled by this station’s reaction to this reporter’s blog. I see a very self-assured professional that has enough experience to know how to gather stories and present them on air. She has figured out what works for her and what doesn’t.

Think about any successful female journalist. Katie Couric, Leslie Stahl, Meredith Vieira etc. If they were being brutally honest wouldn’t their blog be similar? Vieira for example made a comment about sleepy sex with her husband on the View several years ago.

It’s amazing that a profession that touts the First Amendment can be so narrow minded.

The only item on this list that gives me pause is number 10. But lets be real. Journalists snoop in the trash and mailboxes. It’s not exactly a secret. 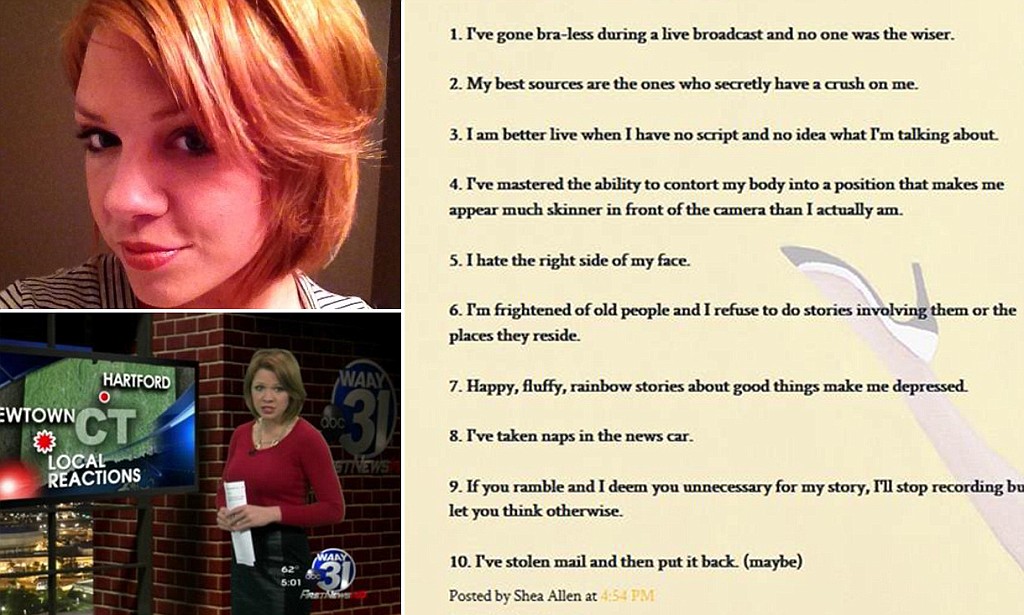 Glamorous TV reporter fired for admitting to going bra-less on air and...

Shea Allen, a correspondent for WAAY in Huntsville, Alabama, listed secrets about her conduct while on the job in a blog post on her personal site - and has now been fired from the station.

Some of these are actually very positive traits. She’s saying that she’s quick on her feet and works well under pressure. WTH is wrong with that?

She’s no fool. She knows exactly what the sexist guys are thinking. She uses that to her advantage and gets the scoop on the story.

This reporter knows her job and has the on air experience to do it really well. imho. I hope another station hires her.

Most of those items are personal trivia that make little difference, but I’d argue that items 6 and 9 reflect poorly on her personal credibility as a journalist and item 10 reflects poorly on her judgment.

It may be unfair but people on news programs have to have credibility and things that they say and do in public, even “off the clock”, can affect that. The station knows this all too well, and if they feel that their reputation may be damaged (and assuming that it doesn’t violate the news person’s contract) they have the right not to have that person be the face of their news team any more.

That said, it’s a Daily Mail article so take it all with a large grain of salt, particularly as they only published it because of item 1.

I agree item 10 is something she shouldn’t have brought up. I think most reporters snoop to get leads but its best not to say much about it. Certainly not publicly.

Firing may have been an extreme reaction, but I can see it being justified if we knew more about why they fired her. The link above focuses on the bra-less confession, but I would think it was number 10 that got her fired. Stealing mail is a felony, no “get out of jail free” card just because you are a reporter.

No professional is allowed to state out loud in public “I have no idea what I’m talking about”. Any lawyer, doctor or engineer , or even a used car salesman, has to present a confident image to the client. A journalist’s entire reason for existence is to know what she’s talking about.

Nobody whose job involves appearing in front of people is allowed to say “I’m frightened of old people”. Old folks are people , too…

Like godwin’s law, murphy’s law, etc—there’s a law that says:
You mention your bra, you gonna gets lots of publicity.

I’m fine with most of those, but I’d sack her for number 1.

#10 she confessed to a federal crime. Too stupid to be employed in the media.
http://www.law.cornell.edu/uscode/text/18/1708

Apart from the stealing mail confession (how stupid do you have to be to proudly list something like that?) she comes off as unstable and unprofessional.

Not that one expects the highest standards in journalism from a TV station in Huntsville, Alabama - but she fully deserved to be fired and gave the station little choice by reposting her cute little list of idiosyncrasies.

As for the dumb poll choices: if her employers didn’t restrict blogs she seemingly had every right to have one, but not to behave on it in a manner that reflects badly on them.

I disagree with the assertion “she’s no fool” - to post several of those on a public blog that she uses to establish her brand as a journalist is foolish - which being fired pretty much proves.

The right side of her face is absolutely hideous.

I sense a career opportunity for our somewhat fair haired reporter.

[ul]
[li]blonde (almost, a little highlighting will do)[/li][li]from a red state[/li][li]overblown sense of self[/li][li]apparently a little bit of a vacuum in the old brain cavity[/li][li]attractive[/li][li]has breasts, even naughty breasts that sometimes escape from their proper place[/li][li]doesn’t understand the issues, but that doesn’t seem to give her pause[/li][li]seems kinda proud of her ignorance[/li][/ul]

Candidate for Fox News for sure. She may need to brush up on her self-righteousness , but she has the raw material to work with.

It does go to show that you don’t actually *have *to blog everything that goes through your head.

Her twitter feed is pretty amazing. So much ignorance, only 180 characters to do it. People truly do not understand the 1st Amendment. There is ZERO part of this situation that has even a remote connection to the the 1st Amendment.

Her whole job is to look good, read stuff in front of a camera and not bring negative attention to her employers. Waiting in the wings are a million young, attractive people with the ability to read (many with breasts and hair!) who will not write a blog. The outrage is that she didn’t know this.

Six and ten are reason enough to fire her.

This list is pretty awful. I wouldn’t want someone who did/said/thought this stuff to work for my news organization, especially as a “face” of the news org. I’d fire her in a minute just for poor character.

First Amendment has nothing to do with it. She didn’t get arrested, and AFAIK her blog didn’t get forcefully taken down. Her free speech had personal consequences.

Yes, I agree that as an employer, I wouldn’t want to keep an employ on who alienates a portion of your customers. She doesn’t like elderly people? Maybe she’ll never have to be one.

I voted “Other” - TV Station should have disciplined her, severely, but not fired her. Then again, I don’t agree with fire-at-will laws, so AFAIAmConcerned anything short of actual criminal conviction should just lead to disciplinary action (for the first offence).

I do think that list is worthy of internal discipline, though - what reporter would straight-up admit they don’t like interviewing a large chunk of a station’s demographic? What if 6 had read “I’m frightened of Black people and I refuse to do stories involving them or the places they reside?” Who’d be championing her rights then?

No professional is allowed to state out loud in public “I have no idea what I’m talking about”. Any lawyer, doctor or engineer , or even a used car salesman, has to present a confident image to the client. A journalist’s entire reason for existence is to know what she’s talking about.

Nobody whose job involves appearing in front of people is allowed to say “I’m frightened of old people”. Old folks are people , too…

So, yeah, once comments like this get publicised and embarrass your employer, you’re going to get fired.

Yeah, those two made me wonder. What does she do when she’s on air and has no script and has no idea what she’s talking about? Does she just make stuff up? Or just babble on about stuff that’s not news while she’s waiting for someone to give her a script? Maybe she thinks she’s better off script like that, and maybe she is able to sound good at those times, but it doesn’t make one confident in the news.

Also, I would guess that old people would be a significant portion of the audience for the local news. Something that could offend them is not good for the station.

And number 9, " If you ramble and I deem you unnecessary for my story, I’ll stop recording but let you think otherwise" doesn’t make her look professional either. I would hesitate to be interviewed by her if I knew she was going to do that.