Well, looked up another old love; found another obit.

Not going to do this anymore - I’ll remember them as they were in happy times.

Anyway, this one raised a Q I never got around to asking.

She joined the Army in 73 or so; came home pregnant and single and alone.

Under what circumstances would she have been discharged? She was a Pfc or maybe made it to Corporal, stationed in Germany.

Would she have gotten an Honorable, or “For the good of the service”, or ?

She would have gotten an Honorable Discharge or a lessor discharge (General or Administrative, both also under Honorable conditions). In 73 she would have enlisted and that would have been for a 3 year active duty commitment unless she wanted to reenlist or had to extend to attend some sort of Army school. In 1975 or so there was a serious reduction in personnel in the Army, what with Viet Nam winding down, so they probably weren’t all that concerned with retaining the services of single mothers. And for that matter there were many commands who weren’t all that happy having female personnel in the first place and were happy to grease the ways for those they could legitimately discharge.

And from my personal observation while I was in the Coast Guard, I knew of a couple females who got or tried to get pregnant so they could either get out or reassigned from a cutter to shore duty. I knew one girl who didn’t like her assignment to a High Endurance Cutter so on her first cruise hooked up with a guy on his first cruise. They fell “in love” and when the cruise was over they got married. Since married couples can’t serve on the same ship, she requested shore duty. SURPRISE, SURPRISE! Hubby got shore duty and she stayed on the ship. So she started wearing maternity uniforms. That didn’t work because what she really needed was a note from a USPHS MD stating she was pregnant.

I sincerely doubt she was after a career.

I suspect that, after hanging out around the big college town (she was not a student; came from (and returned to) a tiny burg with pop of 9,000 in 2010) doing what was known as “looking for her Mrs. degree” and thinking I was the one (really, really wrong!) she probably thought the Army might be a good place to look. Sadly, she was not above getting pregnant to try to force a marriage. That didn’t happen either.
She eventually did change her name and whoever it was gave his name to her sons (it was twins); the obit went into great length about birth, parents, preceded, survived, but no mention of a marriage. Maybe she made up a new surname - she was, apparently, desperately sad - the pic in the obit is of only her face - and her face was almost wider than long; the kid who weighed maybe 100 pounds died at 60 morbidly obese.
All the obit had to say was that her death was “unexpected”. I’m guessing congestive heart failure.

You’re assuming that she wanted to get pregnant. That’s not at all certain. Perhaps she was raped: 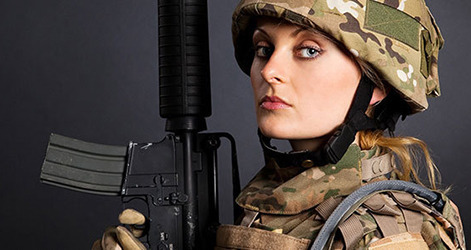 We spoke to Donna Noble (not her real name), a 20-year Navy veteran who traveled the world and raised a child while in the service, and learned that not only do things kind of suck for ladies in uniform, these problems show no sign of changing...

Around that time the US military went through some changes in dealing with pregnant military members. The various women’s auxiliaries, such as the WACs, WAVEs, and WAFs, actually integrated into their service. Before they were somewhat separate.

Back in the day women who became pregnant were discharged. Simple as that.

Then around the 1970s and 1980s pregnant women could ask to stay in the military.

Now women have to request a hardship discharge to get out if they become pregnant. They basically have to prove that there would be no one to watch the child if they get deployed to Afghanistan or somewhere else where they can’t bring the child.

I was in the US Air Force and it’s possible that other branches of the military are somewhat different.

I can’t imagine a single mother stationed in a country wherein she does not speak the language being considered an asset to the Army.

I seriously doubt they were heartbroken to see her go.

For the military - what did you do with females who join simply to husband-hunt? I can’ imagine they are great for morale or cohesiveness. For some reason, I’m thinking she was assigned to the Adjutant General office.

Would she have been given anything like free range of the base to see what might be available, or would her first affair get her slapped down?

I can’t imagine a single mother stationed in a country wherein she does not speak the language being considered an asset to the Army.

I seriously doubt they were heartbroken to see her go.

For the military - what did you do with females who join simply to husband-hunt? I can’ imagine they are great for morale or cohesiveness. For some reason, I’m thinking she was assigned to the Adjutant General office.

Would she have been given anything like free range of the base to see what might be available, or would her first affair get her slapped down?

Would this be any different for a single father who is in a country where they can’t speak the language? Happens all the time in places like Germany.

Simply to husband hunt? Women that I’ve known in the military join for the same reasons that men do: a job, training, and serve your country are the big three. I doubt that very many women join just to find a man. Of course with there being about 3 men for each women, they do have that advantage.

“Free range of the base?” They can go anywhere their job requires or any other place open to all ranks. There’s no “slapping down” unless the person is getting involved with a supervisor or crossing the officer/enlisted divide. Then there are some restrictions while on ships and in the field.

I think it’s much more likely that a man might join the U.S. military to wife-hunt than a woman might join it to husband-hunt, although he wouldn’t consciously think that’s what he’s doing. There have been a lot of men who joined the military because they wanted to get out of the small town they grew up in. They had never had much luck getting dates. They might scrape through a state university, but they aren’t particularly motivated for education at that point and can’t come up with enough money for tuition anyway. So they join the military and find themselves overseas. There they meet some pretty woman who actually finds them interesting and richer than the local men. They get married and come back to the U.S. when his tour ends. There have been a lot of such cases. I can’t offhand think of any similar cases with women.

In fact, a military woman marrying a foreigner and bringing him back to the U.S. was so rare in the 1940’s that it was considered the stuff of comedy: I Was a Male War Bride

I Was a Male War Bride is a 1949 comedy film directed by Howard Hawks and starring Cary Grant and Ann Sheridan. The film was based on I Was an Alien Spouse of Female Military Personnel Enroute to the United States Under Public Law 271 of the Congress, a biography of Henri Rochard, a Belgian who married an American nurse. The film is about French Army officer Henri Rochard (Grant) who must pass as a war bride in order to go back to the United States with Women's Army Corps officer Catherine Gate...

We’re talking about the mid-70’s - many women were still in the husband-hunting mode. This woman came from a town of probably 6,000 (it was 9,000 in 2010). She moved 100 miles to live in a college town (W. Lafayette IN - Purdue) but did not enroll. She thought she had one, but it turned out that even though they all say “I’m not looking to get married”, some of them really, really aren’t.
Once she realized she had picked the wrong one, I’m guessing her parents cut off funding. She had no particular job skills, and, with the war winding down but not over, the Army was taking about anything. She qualified under those conditions.

The fact that she came back pregnant and alone told me she thought she had one on the line in Germany and figured getting pregnant would “make” him marry her. That trick was still going on in the day.
Yes, the women of that time still had many who considered career women as “too undesirable to get a husband” and that a real woman was a wife and mother and never worked outside the home.
I have a sister who did the same, but in a different college town. She was smart enough and attractive enough - she nailed one. One that she shouldn’t have, but it was 30 years before she figured that out.

I don’t think the possibility of overseas deployment occurred to her - maybe she was too aggressive stateside, so they sent her somewhere where her selection was limited?

I think I am probably best able to speculate re the actions and motivations of an old lover, you think?

If she was raped, she had no reason to NOT get an abortion - it was well known in our group, and she had no particular objections. She wanted the kids (twins); I’m guessing that, had her pregnancy been the result of rape, she would not have carried them.

No,I can’t - what makes you think you have a better chance? And why does what a confused young woman (now dead) did 28 years ago interest you?
Have you discerned the identity of the individual and remember specifically raping her in Germany in 1976?
Or, to use an old expression: What’s it to you?

I’m trying to find someone who knows how the US Army would have likely handled a husband-hunting Pfc in 1976. If you can’t help, find another thread to shit in.

You’re the one that said in your second post “Sadly, she was not above getting pregnant to try to force a marriage.” Why does what a confused young woman (now dead) 28 years ago matter to you? You’re the one who jumped to a conclusion about what she did.

I really needed that reminder…

Now I feel ancient. I remember exactly what I was doing in 1976.