For comparison, the CDC keeps weekly tabs on total deaths from all causes here https://www.cdc.gov/flu/weekly/weeklyarchives2019-2020/data/NCHSData28.csv The last three data points should be ignored because it takes three weeks or so for all the numbers to come in.

Either of these is a lot of people. But the true effect of the coronavirus can’t be significantly more than these numbers. Can it?

A few confounding factors I can think of:

I don’t know if these factors are sufficient to explain the discrepancy you’re seeing, but are undoubtedly significant.

I’m not a statistician or a epidemiologist, but I imagine deaths from other causes are way down, for example – traffic and other transportation deaths; flu and other communicable disease deaths; stress-related deaths (this could go either way, I guess – my stress levels are way down).

According to this, as of August 22, there were over 200,000 excess deaths worldwide, which they claim is the COVID undercount.

FWIW the best figuring of excess mortality may take years to figure out. But of course some number of the vulnerable medically fragile individuals who died of COVID-19 were at risk of dying of another trigger in the following six months.

The last three data points should be ignored because it takes three weeks or so for all the numbers to come in.

It takes longer than that. Compare, for example, the weekly tab from two months ago to the most recent. Between week 20 and week 28, they added another nearly 12,000 deaths to the first quarter (weeks 1 to 13), including another 448 way back in week 2. I would be very leery of comparing numbers for at least three months and preferably six, because (especially this year) death certificate preparation can take longer than you think. In my state, for example, funeral directors are the ones who submit the death certificate to the state health department, and delayed funerals and backlogs mean they are slower even than usual.

Here’s a dataviz. There’s a discrepancy of about 50k deaths through 25 weeks, and that’s 50k deaths under-reported. 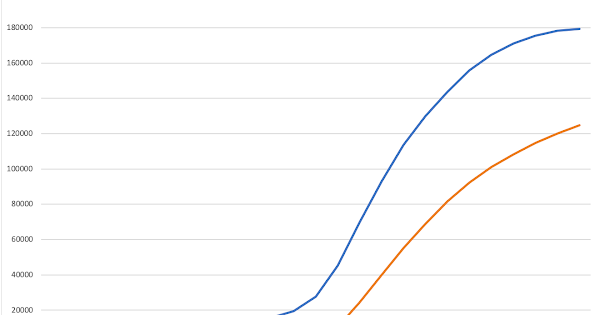 Let me be sure I understand you. The claim here is that about 50K people died in the first 25 weeks of the year but don’t show up yet in any publicly available database? That would seem unusual, in this year where we’re seeing data like we’ve never seen before, all the way down to number of tests performed daily county by county.

It’s a pretty big claim. What percent of total deaths, from all causes, are we talking about? I’m also trying to imagine how heavy an overload there must be to cause delays of weeks or months in processing death certificates. Like, a surge of 40 percent I could understand. But a surge of ten percent in workload – I wouldn’t think that would stress the systems too terribly.

Unless it’s just common, in any year, for deaths to take a long time to be processed? I’d buy that as an explanation, as opposed to the workload just being too high this year thanks to covid, but I’d still expect an effort to be made to hurry things along this particular year, given the profound public health implications of measures that are driven (or not, as the case may be) by this kind of data. It would seem both highly negligent and also intentionally foolish to deploy such incredible resources to running hundreds of thousands of PCR tests a day yet being willfully blind to exactly how many citizens are dying.

An estimated 80,000 Americans died of flu and its complications [in the winter of 2017-18] — the disease’s highest death toll in at least four decades. 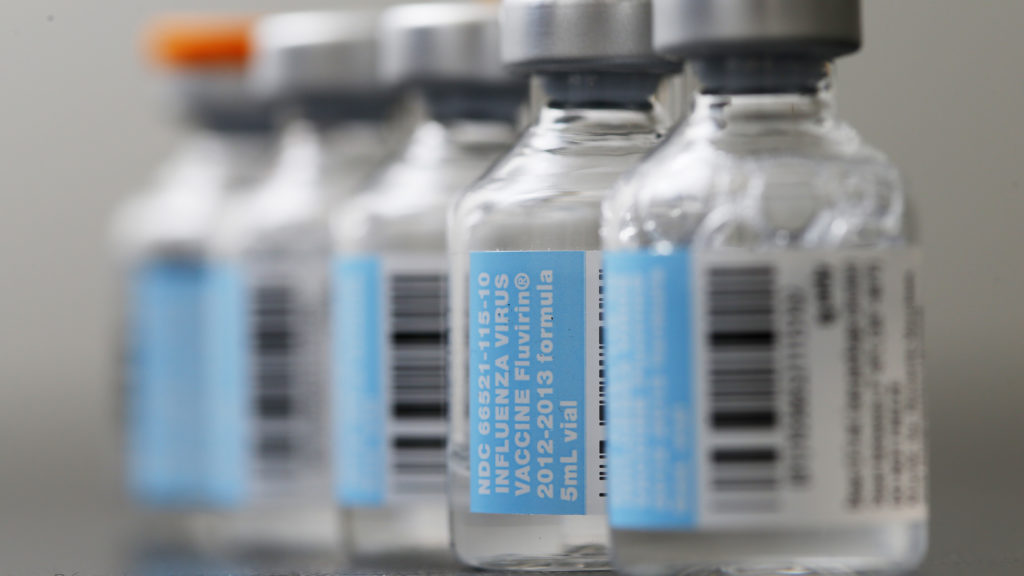 So you are comparing to a year that already had a high excess.

These numbers aren’t straight comparisons because they track flu by season rather than calendar year. But a typical season lately is between 12k and 56k deaths in the US.

Let me be sure I understand you. The claim here is that about 50K people died in the first 25 weeks of the year but don’t show up yet in any publicly available database?

It is directly from the data set from the CDC linked in the OP of this thread. It could not be more publicly available.

Let me break it down:

Let me know if you’re having difficulty with anything else.

Oh, nevermind, I think I get what you are saying. You are suggesting that all those other deaths were actually from covid. I’m guessing they were ‘reported’ as something, though, so I still wonder what it is specifically you mean by ‘under-reported’. Maybe you mean misreported? You’re talking about a ‘discrepancy’, meaning columns don’t match. I’m assuming those deaths that are publicly reported have indeed been placed in some sort of column.

Lots of people have reported that a relative who they know died of Covid-19 was listed as dying from pneumonia, or other causes. Others have reported loved ones dying after experiencing symptoms of Covid-19, but not ever being tested, and having the cause of death listed as a stroke, heart failure, etc., which might have been the immediate cause, but was precipitated by Covid-19. I mean, they were finding people dead in their apartments in NYC at many times the usual rate back at the start, way before there were enough tests.

Also, it wasn’t until a ways in that they began recognizing how much it was causing blood clots, and damage to organs other than the lungs. Probably a lot of deaths were misattributed. Some places have reported pressure to not attribute deaths to Covid-19.

So, here’s some quick arithmetic on the data in the CSV file from the OP. Two columns here, the first with week number and the second with 2019/2020 deaths compared to the average from that same week over the past six years (as Lance_Turbo has done above).

I looked at the weeks going back to 40 of 2019 to see if there were some sort of ‘baseline excess death’ we should take into account. There does appear to be, as you may be able to see from the data.

The first 12 weeks of 2020, before things start to really take off in week 13, run an excess of 1619 deaths a week, on average, compared to the average of the prior six years.

It follows, then, that in the six months or so before the deaths really took off in week 13 of 2020, Americans had been dying at an average of 2283 more per week than they had over the past six years. There does seem to be some sort of baseline of excess death, using this methodology, that we should account for.

I am not, of course, claiming that any of this necessarily reflects reality. But it’s the way I’d approach that data table.

There’s no reason to think that your “baseline excess” would have continued past normal flu season, which I would bet is a primary cause.

It looks like 2019-20 was probably a moderate to fairly bad flu year, but who knows if we will ever know for sure exactly what the split was during flu season. We can be pretty sure that it hasn’t been causing a lot of deaths all summer, though.

Out of curiosity, what do you think could be the cause of some other large quantity of excess deaths.

By the way, baseline excess deaths is a bit of an oxymoron.

By the way, baseline excess deaths is a bit of an oxymoron.

Fair, to be sure, but only in the same way that ‘excess’ ever is. I mean, ‘excess’ above what? If what you are comparing something to always gives you an excess, then maybe it’s not an excess after all.

Here’s the full table, with every entry comparing the reported (or ‘under-reported’, as the case may be) numbers from 2019/2020 with the same weeks from prior years. The last column compares 2019/2020 to the average across those years. Not too many negative numbers here, and a whole lot of four-digit ones.

Out of curiosity, what do you think could be the cause of some other large quantity of excess deaths.

Oh, I see no reason to doubt that the great bulk of the ‘true’ excess deaths (if that’s something we could ever really know, with a crystal ball to tell us exactly how many people are supposed to die in a given year) are from the disease. I do have concerns about the stories I hear from other countries, not so much the US, about missing half a year, essentially, of things like cancer treatment or whatever else might have helped to forestall death from non-Covid causes in vulnerable people, but I wouldn’t have the faintest guess how many such deaths there might be. And I don’t even want to entertain speculation (of my own) about what effects there might be from lives saved from reduced accidents or taken by drug abuse or whatever. All that seems a bridge too far in any armchair analysis.

There’s no reason to think that your “baseline excess” would have continued past normal flu season, which I would bet is a primary cause.

Thinking this through a little more, I guess I didn’t fully grasp what you meant at first. I guess you meant that the better way of looking at it is that those weeks spanning week 40 of 2019 to week 12 of 2020 were just especially bad already, even before Covid. Yeah, I guess I get that. Though, six months running is a long time for anything like a flu surge, wouldn’t you think? If you were asking what else might have caused those weeks to be especially deadly, in light of the six years before them, I wouldn’t have a clue.

I’m a little intrigued, though, by the idea that Covid may have been circulating for a little while before we figured out what was going on. Seems absurd, though, to attribute such large, and relatively unusual, numbers to that even so. You’d have to think we’d have figured it out earlier, if that had been the case.

I suppose things might look a little different if we were looking at per capita rather than raw numbers, but I can’t imagine things have changed quite that much over so short a time. I’d also think to look at counting methodologies potentially changing, but we’re talking about raw deaths, right? Hard to imagine we’re simply ‘finding’ more of those than we used to. I dunno.

It looks like 2019-20 was probably a moderate to fairly bad flu year, but who knows if we will ever know for sure exactly what the split was during flu season.

Note the crazy excess of pneumonia deaths for 2020? Pneumonia deaths are pretty stable and if you exclude the outlier year of 2020 there is a standard deviation of only 3,945. When you add in 2020, the number jumps up to 16,631, over four fold.

For shits and grins, drag the slider so the range is weeks 1 through 12 (before the shit really started to hit the fan) and you’ll see that 2020 looks like any other year, both from a total and pneumonia related death standpoint.