US voters: Are you afraid of the other side, and to what extent?

Somebody got real tired of cars hitting his mailbox.

I am surprised to not see more AK-47’s cheep and abundant. And just about any idiot can spray and pray with it.

Any idiot can spray and pray with any semi-automatic rifle. The AK-47 was designed for an army of uneducated conscripted peasants and it’s a fine rifle for them. But the AR variants aren’t all that expensive these days and ammunition is a little easier to come by. Also, think of the AR variants are Barbie dolls. You can customize your Barbie with whatever clothing and accessories you like moreso than you can with your AK-47.

Sure. And an AR will be more accurate with tighter tolerances. Tolerances that made the M-16 difficult in Viet Nam. The AK is meant to be abused, which is what happens in war, or by anyone that really has no clue WTF they are doing. Never shot one myself. I have shot an AR once.

Of course. But you need to be clear and knowledgeable when talking about stuff and trying to make public policy and laws. I suspect he has not a single clue. About anything.

I have no dog in the fight about semi-auto rifles. Don’t own one, but I know what they are.

Yes, terrified. There are domestic-terrorism recruitment flyers nailed to trees around town. Multiple people with flags bearing the images of weapons of war. They’re itching for a fight. And I’m one of the ones they’ll gleefully kill the first time they think they can get away with it.

It’s almost as if we should take their “Second Amendment solutions” statements and their “When do we get to use the guns?” questions of their self appointed leaders seriously. 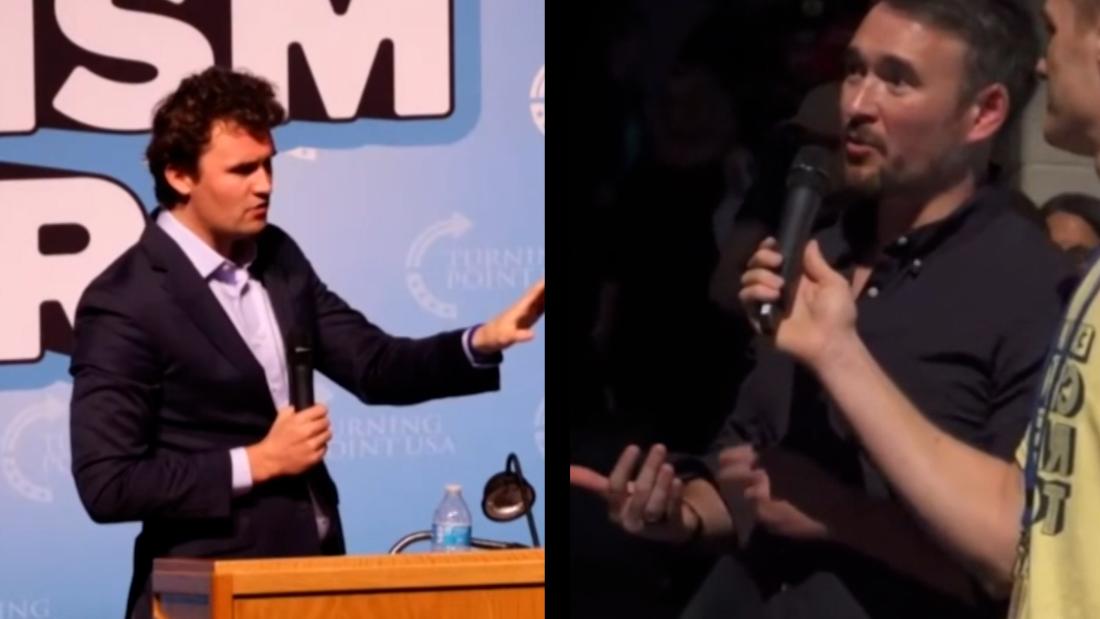 'When do we get to use the guns?': Attendee shut down at right-wing event -...

At a speaking event in Idaho, one man asked right-wing activist Charlie Kirk about using violence against democrats.

their “When do we get to use the guns?” questions of their self appointed leaders seriously.

If you’ve been stockpiling guns for the better part of the last two decades, wouldn’t you want to know when you are finally going to get to use them?

It’s quite an investment they have made in preparing for the revolution, sure’d be a shame if they never got the pay-off.

What else are they going to do with them, sell them to criminals?

I fear for the country’s future, especially for my grandkids. I’m not afraid of the right as individuals: I’m a gun-owning lefty and I got my training in 20 years of military service. So bring it on, assholes.

The latest gathering of the crows set their agenda for their presumptive win in this coming election. They apparently have consulted with Newt Gingrich, assuming that nobody will remember the disaster that was Newt’s “Contract With America”. First up, get rid of negotiated drug prices and “let the market determine the cost”

Secondly, fire the 87,000 IRS agents that are presently being hired to track down tax fraudsters and dodgers; gee, I wonder why. Kevin McCarthy’s lust for the Speaker position knows no bounds, and he is pandering to the worst elements of the electorate while avoiding mentioning the worst parts of their agenda.

So yeah, I’m afraid that enough morons and assholes will vote for the worst candidates possible and trash our constitution.

I’m a bit worried about my own side, at least the character who’s the Democratic nominee for Congress in my district.

This guy (Geoff Y☮ung, and yes, that’s how he spells it in campaign literature), wants to impeach “the six crooked, woman-hating Supreme Court justices who overturned Roe v. Wade” and impeach President Biden, because Biden is a “war criminal”. Y☮ung’s platform includes stopping aid to Ukraine, ending economic sanctions against all countries and individuals and closing all U.S. military bases around the world.

This geek would have trouble getting onto the ballot in Manhattan, but in red state Kentucky he stands a snowball’s chance in an incinerator come November.

Sounds like the Democratic party isn’t very supportive of him, and it doesn’t sound like the party even really bothered with the district at all. The district has been held by Republicans since 2012.

Interesting in digging around, Fayette County, which is actually relatively blue, went for Preece, but the red rural counties around it tipped the scales for Young, with the greatest support percentage support in Nicholas County, which went 95% for Trump in 2020.

Sounds like there was a Republican effort to cross the primary aisles to nominate the worse candidate.

Does Kentucky allow cross-party voting in the primary?

No, KY has closed primaries.

It’s even worse in my district, where Hal Rogers has been our rep since 1981. He’s 84 and just rolls himself out to cast a party line vote now and then, but no one will seriously challenge him and he won’t retire.

His Dem challenger this time is a 30 year old nonentity who graduated from law school earlier this year. He barely has a functional web site, and I’m not even sure he has much of a connection to the district.

When Rogers does go I shudder to think what kind of moron reactionary we’ll replace him with.