It appears to me that there is a lot of anti-Wal Mart sentiment. Quite a bit originates from labor unions and their supporters in some media outlets and certain political circles.

I’m looking to give some advice to a family member who may be applying for a position with Wal Mart.

I don’t know too much about it myself, but the substance of the accusations, based on excepts from the court filings, is summarized here.

Interesting. I was going to provide you with a reading list to explain some of the anti-Wal-Mart sentiment (there are close to a dozen books and videos), and someone has removed all of them from the Wikipedia page except for the video Wal-Mart: The High Cost of Low Price*. If you’d like more information, I’ll be happy to give you a list next week. It’s on my work computer.

There was a ton of “shrink” at her store so they brought in a new manager to fix the store. He was a hatchet man as far as I could tell. My wife was one of the higher paid people in the store due to her always getting a 5% raise. She got fired, imo because of her high pay.

I don’t know about the US, but Asda (which is owned by Walmart), Tesco, and a number of other supermarkets have been recently exposed as using the unemployed as free labour. 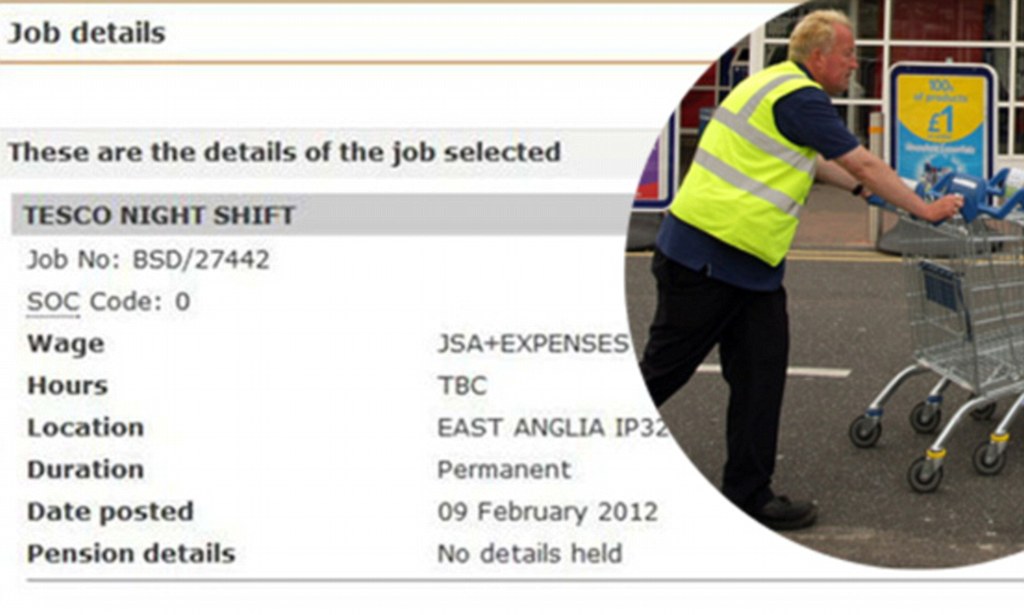 A vacancy appeared online for the permanent job in an East Anglia store. The role is one of hundreds of unpaid positions adopted by the supermarket as part of the Government’s controversial 'workshare scheme'.

There was a ton of “shrink” at her store so they brought in a new manager to fix the store. He was a hatchet man as far as I could tell. My wife was one of the higher paid people in the store due to her always getting a 5% raise. She got fired, imo because of her high pay.

Just wondering how they did it. Did they force your wife to clock out for the day and then tell her to go back to work? I’d be documenting that kind of treatment like crazy. It would turn into a goldmine for your wife!

I don’t know about Wal Mart but they aren’t the only ones who know you have to work overtime because they need you, so they ask you to doctor your time card, and then if you’re lucky you get comp time the next week so they don’t have to pay overtime. You just put the punches on another day (this was in the day of punch cards).

Do you mean they didn’t give her over time pay, or just didn’t pay her, period? Because the latter is illegal, and they could get in huge trouble for that.

Do you mean they didn’t give her over time pay, or just didn’t pay her, period? Because the latter is illegal, and they could get in huge trouble for that.

Good luck with that. I’ve said the same thing, but nearly every place I’ve seen still does it and doesn’t get in trouble for it. They know how to set it up where the extra work is optional, but then they’ll fire you for not doing it.

Also, the name of the store is now Walmart. No hyphens and no extra Ls.

People love to hate the big company for being big.

OTOH, I remember a guy at my last high school reunion was a Walmart manager He left early - “sorry, I have to get up early to open the store at 8AM for the shoplifters.”

The reasons for not liking then are classic - they sell at an extremely low price; they make up for it in volume, and by squeezing their suppliers. Mom and pop stores typically go out of business when Walmart arrives because they can’t get stuff wholesale for as little as Walmart charges retail. The typical small town store existed on a massive markup because the locals had no other option to shop. Walmart comes into the area, all these stores close up and main street is deserted.

Apparently the latest tactic, once the competition is gone, Walmart then closes their medium-sized stores and opens one supercenter 30 miles away to serve the whole area.

Plus they replace a small store that knows their product well and can give you good advice, with a collection of minimum wage staffers who know nothing and can tell you notihng.

They squeeze suppliers by buying more and more from them, then once they have a significant part of thier business - they approach with the offer they can’t refuse. Cut the price Walmart pays, or lose a huge chunk of your sales. So, Walmart’s less powerful competitors end up subsidizing Walmart indirectly too.

Like most big businesses, the message from above gets perverted when passed on to below, so “cut overtime” comes down as “work the extra for free”, and cut salaries probably translates to “fire the highest paid”. Head office is likely only interested in results. Nobody ever got promoted for saying “think of the workers rather than the bottom line”.

Whether Walmart is particularly anti-woman, well, a company that doesn’t care, doesen’t care about almost anything. Whether you work for Walmart or Best Buy or dozens of other modern corporations with the reputation, be prepared to be used and tossed over the side when it’s convenient, regardless of race, creed or colour.

Bonuses were based on a percentage of store profits. Managers could increase profits by reducing operating costs. Therefore, there was an incentive to keep the store undermanned. They paid pretty low wages for our area too.

Because the store was undermanned, there was often a lot of work to be done. So lets say there is 10 hours of work to be done resetting the shelves. No overtime is authorized and no working off the clock is authorized. But if you don’t get this 10 hours of work done in 8 hours we will document that you failed to perform a task and you’ll be disciplined. Get disciplined 3 times and they fire you. So she would work 8 hours and then clock out, then work 2 hours off the clock to get the job done. And if you get caught working off the clock you would get fired for that.

So they could say we have a zero tolerance policy towards working off the clock, while still not fixing the underlying problem that the bonus system encouraged managers to force people to work off the clock. It was pretty clever.

It appears to me that there is a lot of anti-Wal Mart sentiment. Quite a bit originates from labor unions and their supporters in some media outlets and certain political circles.

You know, opening by dismissively characterizing the opposition without offering any evidence and segueing immediately to “separating fact from fiction” seems…provocative, to say the least.

If you’d cut that entire political dig out of your post, and opened with “I’d like to get some factual information,” it seems like nothing would be lost from the general question.

It wasn’t meant to be a dig, but I agree your opening would have been better.