We had an Earthquake!!!

And on my birthday, too… (snif)… What more could a geologist ask for?

That is too cool, Pantellerite - Happy Birthday!

Uh…congratulations?! Thank God you don’t work in the Center For Disease Control.

I guess y’all party pretty hearty out there. Happy birthday!

Next year, I’m asking for a volcano.

Honestly, though, I didn’t feel it. But I wasn’t feeling much that night.

Happy Birthday! Maybe the earthquake was caused by a large group of people lumbering away from the dinner table after copius helpings of alcohol and birthday cake?

Happy Birthday! Next leap year have a job as “peace officer of the world” would ya? < grin >

My nephew was born today! Rhyse Daniel…you can read more about if you’d are interested at It’s all about the child!

'Fraid not… both my “special day” and the Earthquake were back on 2/26. Shamefully, I just found out about the EQ today.

Well, it’s the thought that counts. Thanks all!

I live on an earthquake line. Get them pretty often.

Most people from the east I have talked to are really spooked by earthquakes even when they are in the middle of tornado or hurrican season.

Earthquakes? Piffel!! I can see three active volcanos from my front porch. They puff steam on cold days, and the last major eruption of Mt. Redoubt was in 1989, when it blew out the north side. 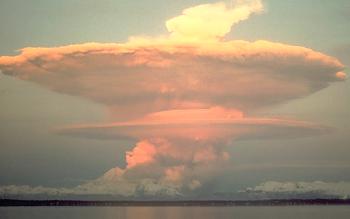 “It is better to know some of the questions than all of the answers.”
–James Thurber

Second Place (tie), Most Valuable Poster (GD)
Second Place, Best Scientific/Expert Explanations (GD)
Not that it’s gone to my head or anything.

Originally posted by ThufferinThuccotash:
Earthquakes? Piffel!! I can see three active volcanos from my front porch. They puff steam on cold days, and the last major eruption of Mt. Redoubt was in 1989, when it blew out the north side.

You live in Alaska? Anchorage? I was in Anchorage during July 4th in 1978, when I was in the Navy.

If I didn’t hate cold weather, I’d live there. The scenery is so breathtaking. The journey up Cook Inlet is something I’ll never forget.

Pantellerite, I need to ask you a question: Is it possible for a person to be so sensitive to p-waves that they can wake him from a sound sleep before the ground starts moving, before the s-waves arrive?

This has happened to me four different times, most recently this past October. At the Shindig, I found out that it happens to Melin’s oldest son as well. We both strongly remember waking nearly a full minute before the Northridge event. I’m much older than he and we live in different areas, he near Pasadena, myself in Downtown L.A.

Dont you get it Pantellerite? It’s a LEAP YEAR. And an earthquake. Obviously, Unca Cecil wanted to send you a personal “Happy Birthday” greeting, so he finally got all those Chinese up onto chairs, got them to jump off all at the same time, & HEY-PRESTO!!! HAPPY EARTHQUAKE! I mean …BIRTHDAY!

Well, Duh! Thanks, Uncle C., for all your efforts and tireless diplomacy that led to the realization of a dream experiment that tested the ultimate hypothesis! I am, as always, in awe. Who’da thunk it that all that foot-stompin’ energy would be focused on my little ol’ spot in the West Texas desert?

As per P- and S-waves: I don’t see why not. Especially if you are far enough from the epicenter that their arrival times would be sufficiently exaggerated, I would imagine that P-waves could wake you up just before the S-wave shake you up. In fact, early detection of P-waves may someday provide something of an early-warning system (though one akin to the tornado warning systems of the midwest–if you hear the horn, they’re all but upon you anyway!) IIRC, animals get all jittery prior to a big shake possibly due to enhanced sensitivity to the P-waves.

I want one, I want one!! But, I will just have to wait until the New Madrid Spreading Center decides to get a little frisky again.

Oh, and to Handy (who said “I live on an earthquake line.”), just to enlighten you a tad, an ‘earthquake line’ is more commonly known as a fault.

‘…Oh, and to Handy (who said “I live on an earthquake line.”),
just to enlighten you a tad, an ‘earthquake line’ is more
commonly known as a fault…’
You don’t say? wow. I Learn something new everyday

PS: earthquake line is what I like to use.

Handy, I was hoping that was the case! Honestly, I was…