Weight of equipment for combat soldiers

I was reading a book about trench warfare in WWI. It stated the full equipment for British soldiers could weigh up to 70 lbs, and that caused large problems for soldiers on the march. In modern times, how much does the equipment of a soldier likely to face combat weigh? Does it differ much between branches of the army, and do soldiers have any flexibility in what they carry?

I’m not an expert, but I think it varies on what you do. The one who carries the heavy machine gun or the radio equipment will have a much heavier load. I think 40-70 pounds is typical.

Here are some reports from military people. I don’t think a backpack is supposed to exceed 30% of your bodyweight, but people today weigh more than they did in WW2. I think average weight back then was about 150, it is probably closer to 180-200 now for people in the military because people are taller and fatter (and probably more muscular in the military since we know more about how to build muscle). 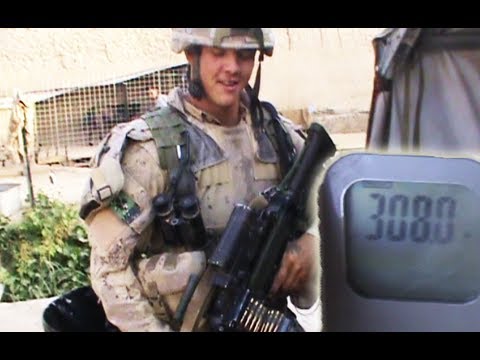 Found that out after an unfortunate accident and death. Soldier was doing a low level jump; static line broke; main chute did not properly deploy; no time for reserve. Soldier weighed 157 lbs, gear was 160 lbs.

Besides his personal gear, he might carry additional magazines for SAW gunners, belts for M240 MGs, probably at least one 60mm mortar round or a tube/baseplate/sight, radio, spare batteries, etc…

Very mobile when in the air - after they hit the ground - not so quick afoot. That’s why they try to drop on or very near their objective. Idea is to be self-sufficient for 72 hours.

Spot on. That was my main duty station. 3/325 ABCT, Vicenza. Monte Berico anyone?

As the old Army joke goes:

Under the weight of radios, batteries, sleeping bags, body armour, helmets, GPS receivers, claymores, mortar bombs, the modern soldier often carries as much and more than that WW1 counterpart. Even though his fitness is probably better, knee and back injuries are an increasing problem.

In the hundred years since WWI, on average, young adult males have become an inch or two taller and around fifteen pounds heavier. So, not too surprising they can carry more.

It’s still generally 70 pounds or so, though. It depends, again, on what specifically you’re doing, but the loads carried by soldiers have been surprisingly steady for a long time.

What I don’t get is those gym rat soldiers who pump up their upper bodies. Don’t they realize that bulging pecs and triceps are just dead weight their legs will have to carry?

As the old Army joke goes:

That’s not a joke.

What I don’t get is those gym rat soldiers who pump up their upper bodies. Don’t they realize that bulging pecs and triceps are just dead weight their legs will have to carry?

Provided they build endurance as well, it’s a perfectly good idea and will make carrying gear in and out of combat easier.

I’ve never understood the attraction of overloading soldiers, apart from understanding the allure of protective armour, since by the time they’ve got to where you need them they will be more tired by the proportion of time spent in this exercise of strength and fitness than they would have been otherwise; and in combat — not that I have any experience — the least cumbering would seem essential ( not to mention that men seem to fight better when they individually choose what to be comfortable in — rigid discipline which includes heavy gear is fine for parade, less so for combat where quickness and intelligence need play.

On the other hand I am aware that the officer classes of yore weren’t strictly keen on intelligent or clever lower ranks ( ‘Barrack-Room Lawyers’ ); and this attitude could have extended to deliberately exhausting men with over-loads as well as giving them pointless duties, so as to keep them out of mischief.

Excluding loot, which was one of the main factors for joining in wars throughout history ( The French in the Napoleonic wars even took along long metal poles in Spain to search for whatever treasures a local peasant might have hidden in the earth ) the weight soldiers should have carried varies wildly. The lowest Mediaeval foot-soldiers might have leather armour but the main weight would be the long pole or bill-hook they had to lug about.

This US Nat Lib of Medicine piece ( excerpt only ) indicates that before the 18th century soldiers rarely carried more than 15 kilos load:

This study reviews historical and biomedical aspects of soldier load carriage. Before the 18th century, foot soldiers seldom carried more than 15 kg while on the march, but loads have progressively risen since then. This load increase is presumably...

A British Napoleonic rifleman ( which would be Light Troops ) here carried 80lb, including oddly enough, bill-hooks.

And this in the same period, states that shoemakers marched carrying more weight than the average soldier, which means in a century when height had got smaller they must have been built like brick outhouses.

Still, my favourite story regarding this is when British generalship achieved one of it’s many startling surprises, at Colenso, when they sent the Irish Brigade into:

a/ a loop of the Tugela River

b/ in the South African sun, which can be quite hot in December

The “attraction” is having the equipment. During actual combat, most of the weight will be unloaded and emplaced or cached.

Having equipment is nice; being ambushed whilst carrying 70 - 100lb less so. It certainly was not moral reasons why men were viciously punished for clinging on to heavy loot during Napoleon’s Retreat from Moscow by an army whose entire reason for existence was the mass looting of countries.