Weirdest thing found in home you bought (apt. you rented)

The purpose of this thread is a weird thing you found in a recently purchased home or rented apartment. It might be something left behind or hidden, or just an iconoclastic feature that made sense to somebody.

Does it count if it’s a boat that we lived on for a bit over a year? If so, when we were checking out the various storage lockers in the v-berth, we came across a leg. Specifically, a below the knee prosthetic.

The man we bought it from lost a leg in a motorcycle accident. We called when we found it. He said we could keep it - it was his “dancin’ leg” and it didn’t fit well.

This is going to be hard to top, methinks.

I bought a 3-bedroom home over 20 years ago. Long about year seven, I decided run a separate circuit to my exercise treadmill in the basement because of the power it was pulling. The breaker box was in my unfinished garage so the electrician decided to run the cable behind the wallboard and drop it straight to the basement at the back of the garage. As their were no finished walls, this would be the easiest route. I okayed the decision and got back to work. 20 minutes later, he called me to come look at what he found. It was a cheap, almost homemade machete that was hiding behind the wallboard. The plastic handle wasn’t tight to the metal and the metal and the blade edge wasn’t sharp but yikes! I reported the find and turned in the item to the local police.

I never heard if any investigation was down, but very shortly after I moved in, the cops stopped by looking for someone who had registered the address as his residence. That person was wanted for a violent crime. When I turned the machete in, I explained that to the cops but they didn’t even seem interested. Just another day at the cop shop.

Shortly after I moved in I was fixing one of the kitchen drawers. When I pulled the drawer out I found a letter stuck behind it. It was county Child Protective Services, stating that the recipient’s request to be emancipated from their parents had been approved.

C’mon, you can’t throw out a perfectly good prosthetic leg. Someone might need it someday.

Xmas is coming up. Make that thing into a lamp.

When my partner moved into this house over 25 years ago it was empty except for a large bag of sunflower seeds. What a weird thing to leave behind, she thought, but went to sleep anyway.

At 6am the next morning she found out when 20 wild cockatoos descended on the back deck demanding to be fed like they had for the previous 20 years … we still feed them twice a day to this day.

Because they can’t leggo?

You guys want weird? You got weird. 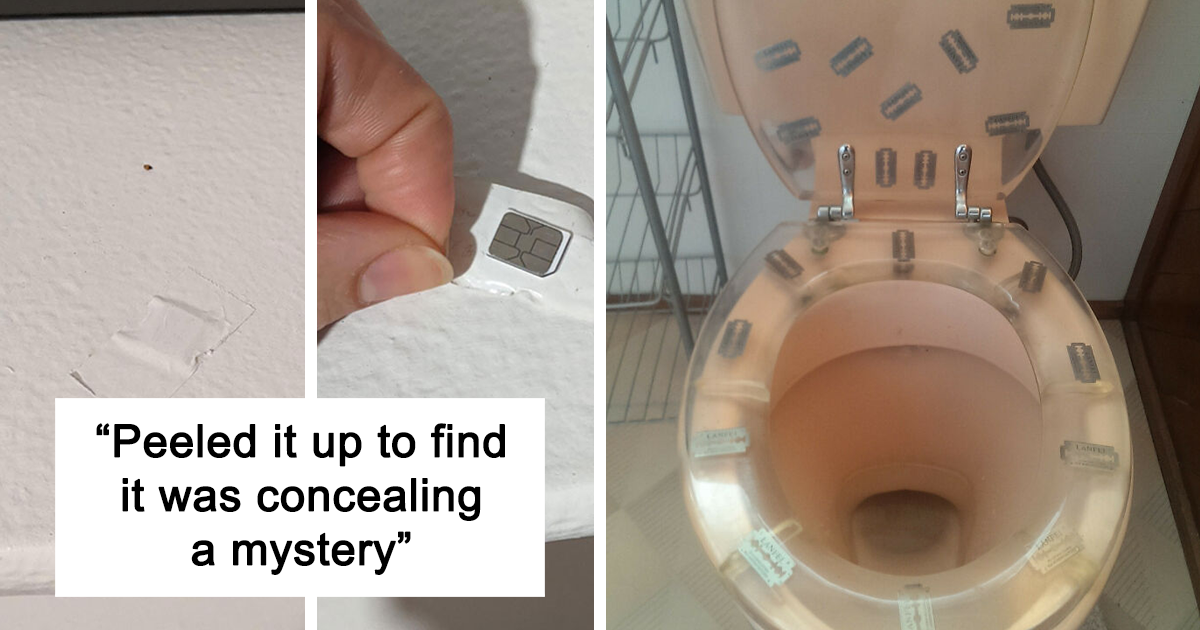 People Share What Disturbing Things They Discovered After Moving Into A New...

Imagine the sheer joy of the day you finally move into your new, dream home. And the cold-shower realization that you may have gotten yourself a haunted house. Or a house of horrors. Or just a really weird place.

Does it count if it’s a boat that we lived on for a bit over a year? If so, when we were checking out the various storage lockers in the v-berth, we came across a leg. Specifically, a below the knee prosthetic.

The man we bought it from lost a leg in a motorcycle accident. We called when we found it. He said we could keep it - it was his “dancin’ leg” and it didn’t fit well.

I’m actually surprised he was so good natured about it. I would have thought he’d be hopping mad.

Most likely, the suspect was dead, or incarcerated, so it wasn’t relevant any more.

I don’t remember ever finding anything really strange in a place I’ve moved into, but when my brother and his wife bought their first house in the late 1990s, they found a box of Jehovah’s Witness literature from mid-century in one of those under-the-eaves closets. He found out it had resale value, and ended up selling it on eBay for a total of about $700.

Well, it won my husband 4 movie passes in a Halloween costume contest. He dressed as a shark and attached the leg with a line to a chewed-off surfboard.

Then a few years later, he presented it to his grandmother who had a bad leg. Hilarity ensued. It may come in handy again one day.

On my first day as a new tenant, I found a couple of bats on the floor in a corner. One was atop the other, and they looked like a single lump of fur and skin. You know how it goes: “What the hell is that? I’ll just get a closer look.” Repeat until realization and recoil. I wasn’t sure if they’d been copulating, fighting to death, just cold or even still alive. After a few minutes of perplexity, it finally occured to me to squash them with a heavy toolbox. I think they were already dead.

An old fashioned metal shot put.
Makes a pretty good doorstop, unless the floors not level, then, not so much.
When asked, I like to tell people it’s a cannon ball.
(So far, only one person has straight up said, ‘No, it’s not!’)

Mom & Dad moved us into a house in SE Wisconsin, in the early 1970s.
We found a taxidermicaly preserved Alligator.

My Dog, Billy, would sometimes chew on it.

C’mon, you can’t throw out a perfectly good prosthetic leg. Someone might need it someday.

it was his “dancin’ leg”

We found a taxidermicaly preserved Alligator.

It needed a leg in its mouth!

I bought a nice little house with a 12x12 cold cellar complete with wooden shelves to hold canned stuff. In one walk there was a built in safe. The seller didn’t know the combination, nor had he ever set foot in the room due to spiders.

I had plans for the room. As I removed the shelves, I found an ancient piece of paper that was crumbling apart. Numbers were written on the paper. After several attempts I got the safe open. It was empty.