The town, despite its name, was built in the 1960s – maybe – by Dean Songstadt, his friend Bill Jorgenson, and two other guys whose names Dean either can’t remember or just doesn’t want to say. Dean and his son Brad run 1880 Cowboy Town. Dean is a cautious man, a little hard of hearing, and wary of people who ask too many questions.
There is no question, however, that he and his partners have built something really special: a totally automated Wild West town populated only by robots.

It’s good to know that there’s a totally automated Wild West Recreation where Nothing Can Go Worng.

Dean told us that Bill, who built the robots, only returns to Buffalo Ridge once a year to perform repairs. This means that 1880 Cowboy Town will be different every time that you visit, because the dummies will always be in a different stage of entropy.

A good example of this is the Town’s memorable tribute to Abraham Lincoln. Abe stands behind protective chicken wire, under a tin roof, at a lectern studded with rusted nails. We noticed that a large ball was stuck onto to the back of Abe’s frayed stovepipe hat, and seemed to slowly pivot. The hat was pulled down over Lincoln’s face, so that only his beard and mouth was visible. “My friend made some of them so the eyes move,” Dean said of the dummies, “and I had a little trouble with the eyeballs.” Dean’s solution was to distract the viewer’s attention. “I gotta improvise a little.” 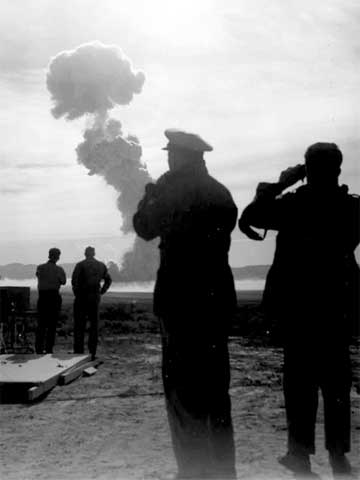 The Atomic Cannon: a bizarre 1950s weapon designed to shoot a nuclear warhead close enough to kill the enemy, but far enough to spare the USA cannon crew.

Good Lord, there’s another one: http://www.roadsideamerica.com/blog/battling-1880-towns/