What are our numbers telling us

It is, to a degree. But I have to stand by a principle I think is important here: ignoring age is basically misinformation. Trying to come up with an “average” fatality rate is tantamount to lying about reality.

I thought this was a decent read on this topic.

I’ve been a big fan of Youyang Gu and his approach pretty much since his early days on the scene back in the spring. Still, his approach is loaded with disclaimers, the primary ones being that it’s not age-adjusted, as FigNorton noted, and that it relies on test positivity rates, which have all sorts of issues as mentioned in your cite.

Secondarily, you picked an early Estimating True Infections page of his for some reason, and he’s updated them since then, most recently here: 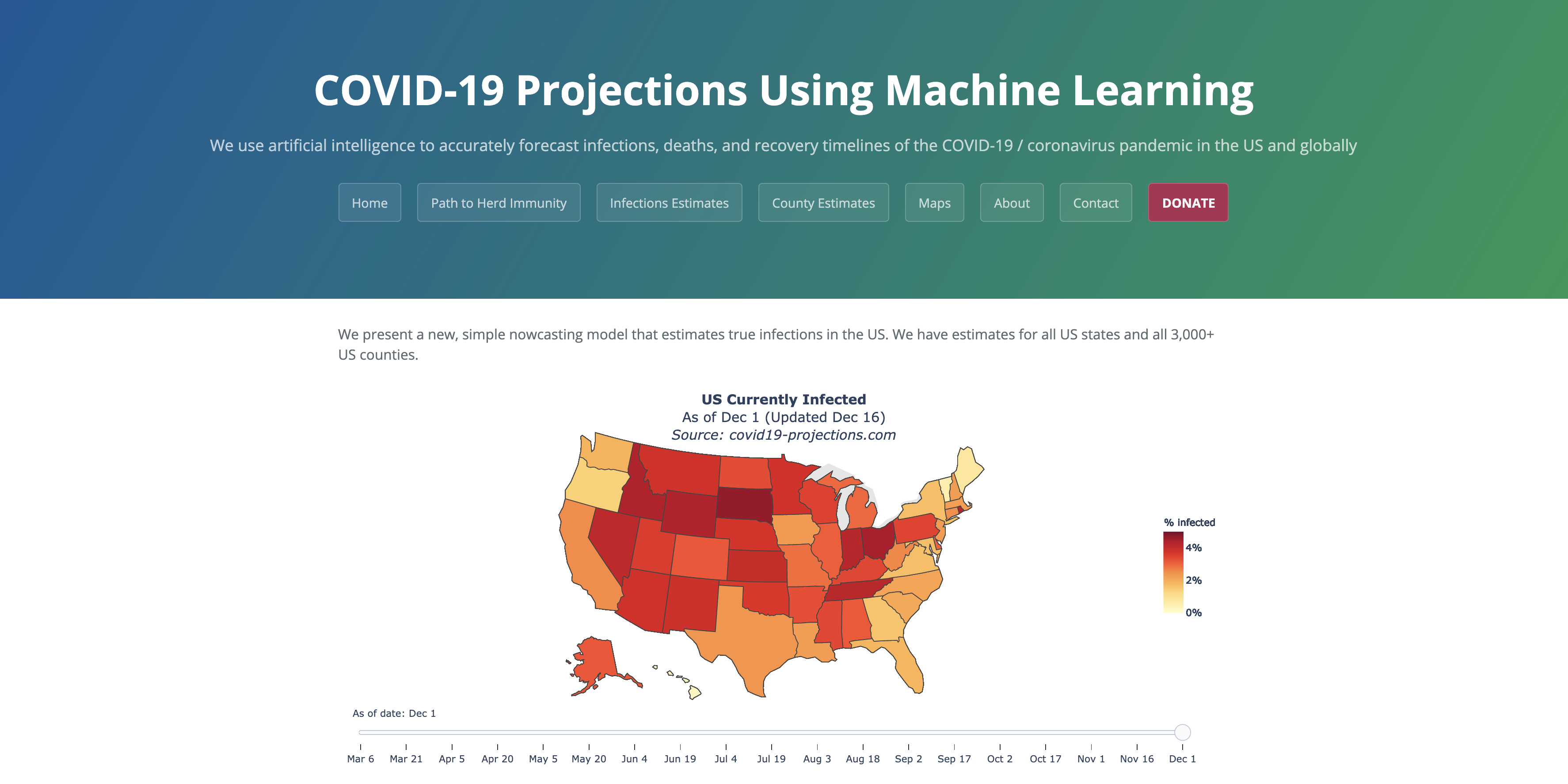 We use artificial intelligence to accurately forecast infections, deaths, and recovery timelines of the COVID-19 / coronavirus pandemic in the US and globally

You’ll note that the US Implied Infection Fatality Rates between the two are drastically different. They are also both different from any number of authors out there. That’s the issue.

If you put a gun to my head, I’d definitely take a Youyang Gu model over some economist’s error-filled Excel spreadsheet, but even he thinks his model is flawed at this time.

Secondarily, you picked an early Estimating True Infections page of his for some reason, and he’s updated them since then, most recently here:

His adjusted positivity rate is interesting. Many states use test results per ‘unique person’ which will inflate the positivity rate. That’s important because some people test regularly because of their profession or they travel a lot. He counts all tests.

Florida, on the other hand, only counts one positive per person for their positivity rate. They still count multiple negatives per person. If every state/country did the calculation the same way, it wouldn’t be bad. Unfortunately, I don’t think most states calculate it that way. It falsely lowers FL’s positivity rate relative to other states.

I would think counting the same person more than once falsely inflates other states’ positives.

Interesting question here, I think. I’ve been tested multiple times now, each time by a different facility. I can’t imagine they have any way of aggregating my tests into a single negative.

Don’t they look at your health card or some kind of ID? They just have to upload it to a central database.

Wouldn’t that violate all kinds of Hipaa rules?

I don’t think so. The database would just be more medical records to be kept private. And there is some leeway for public health emergencies.

I would think counting the same person more than once falsely inflates other states’ positives.

I would agree. It could greatly mess up the figures based on the assumption that there are 8-20 times more infections than tests.

And I agree that there’s no reason they couldn’t keep it all correlated, since medical facilities need your medical history, and thus tend to have you sign to allow them to see those records without a HIPAA violation. They just aren’t allowed to share it with anyone else.

The actual data collection could anonymize the data pretty easily, and it would be further anonymized once reduced to summaries and analyses.

If states are already consolidating by repeated tests per ‘unique’ person, they probably have some kind of ID per person that allows for anonymity.

I don’t know the best way to account for positivity. I’m not an expert. If people are testing repeatedly, then there will be a lot of negatives but it probably evens out from state to state. I agree with Youyang Gu that all the persons negatives should count because you want to see the number of people who test negative in real time. Disregarding subsequent negatives for that person doesn’t provide the real picture for that day.

Disregarding subsequent positives kind of makes sense. People will retest if they’re positive to see if they can go back to work. The first test makes them a case. Additional tests don’t. On the other hand, I don’t know if FL also didn’t count that case’s negative. I bet they did count the negative that allows him/her to go back to work. That would be sketchy. Plus, it’s not how all states do it. I don’t know how often positive people test again in order to go back to work. I’m assuming most people stay home for at least 10 days from when symptoms first appear (unless they’re sick longer) and don’t test again.

Anyway, my point was that, depending on how many positive people retest, only counting the first positive may skew rates more than negatives. Therefore, all the states should be doing the same thing.

Two things would shock me. One, that all the states are doing this the same way; and two, that they’ve managed to set up the sort of anonymized, but traceable, infrastructure required to avoid double counting people who test negative, and not counting people who had it and subsequently test negative. The US healthcare system is just not set up like that.

I’d love to be wrong, of course. If I can find a cite either way, I’ll post it here.

The process of deduplicating tests to arrive at a true “unique people” metric is extremely complex, particularly given the patchwork of testing sites and commercial and public labs state and territorial public health departments receive data from. For many states, the process has proven impossible: some states gave up trying to report tests in unique people back in the spring and switched to specimens, and several others currently reporting in people publicly note the difficulty or impossibility of consistent deduplication.

I think that’s the best way to do it anyway.

However, the health department does have to track who the positives are for contact tracing. I wonder if FL is removing second positive tests once they identify a person. I vaguely remember complaints that positivity values were changing after the fact. I doubt it’s that big of a deal since I don’t think many people with mild disease are retesting.

I think that’s the best way to do it anyway.

It probably depends on what you’re trying to measure. If I got weekly tests, like my nephew, and they were all negative, it must increase the denominator of some measurement or other, right?

Anyway, I was responding to @BigT and @FigNorton who were saying that they are tracking individual people.

It probably depends on what you’re trying to measure. If I got weekly tests, like my nephew, and they were all negative, it must increase the denominator of some measurement or other, right?

Yep. But I’m assuming it would all even out. If there’s no anomalies, monitoring changes in positivity will give you an indication of an upcoming surge.

If you read the link where I got the quote from, the answer seems to be that the statistics and counting methods vary widely from state to state. Hopefully this isn’t too political for this forum, but a national standard implemented early would have been really helpful for this.

Hopefully this isn’t too political for this forum, but a national standard implemented early would have been really helpful for this.

That would be nice!

I didn’t say they were tracking unique individuals just that it doesn’t seem technically or legally a problem to do so.

I agree that how important this is depends on what you’re tracking. If we’re focused on positivity rates, double counting negatives and positives probably isn’t a huge issue. If they add every positive test to the active case count, that would be a problem for that number.