What are our numbers telling us

Deaths and hospitalizations seem to be about the only somewhat solid statistics we have to work with when projecting infection rates in the general population. We know the vast majority of cases go un-diagnosed but is is almost impossible to have a factor that we can multiply diagnosed cases with to estimate total infections. Most seem to agree that a factor of about 10 fits best. One major stat that I am curious about is whether or not publicity about risk factors and age have lowered the death rates and infection rates in those particular demographics. I would think that the average age of death from corvid should be getting lower. Instead of maintaining a fixed average it may have been better to give a weekly average age and it would reflect that risk groups were getting more protection. If death rates continued to go up and average age of those dying was going down it might indicate a much higher infection rate than we are currently factoring in.

I put this in the wrong forum by accident

You can report your own post and ask for a move to another category. I’ve done that for you.

I put this in the wrong forum by accident

Most seem to agree that a factor of about 10 fits best.

I don’t know who these “most” are, but I’m not one of them. That was very likely true in some places back in March, but if it were true now, almost half of the US would have it or have had it and I don’t know how you’d begin to explain the Dakotas.

Here’s an NPR story about a government model. It mentions eight time and ten times as factors. 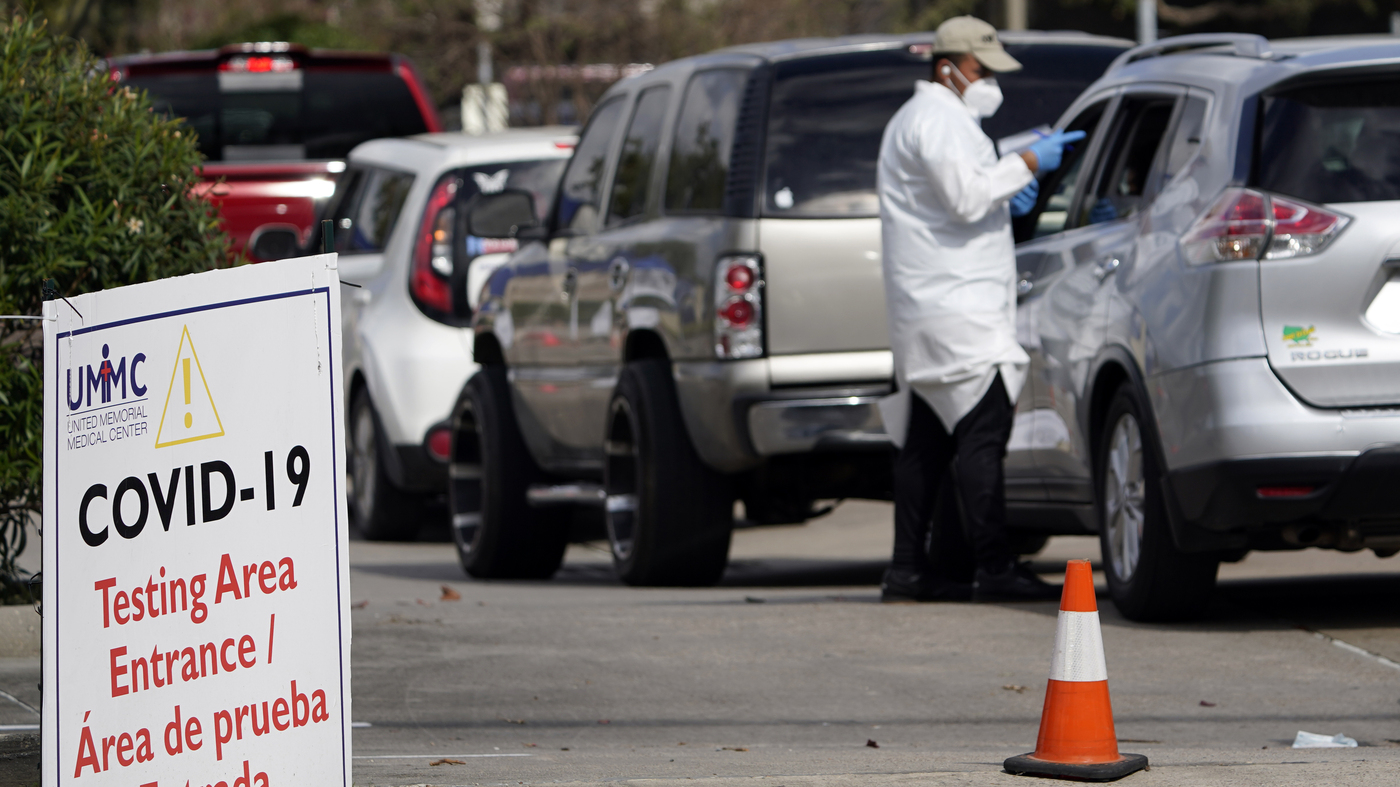 Government scientists estimate that the true number of coronavirus infections is eight times the reported number of 12.5 million, meaning "most of the country remains at risk," the team reports.

I agree that the Dakotas would not fit into that range. I would imagine thought that we will very sonn see steep downward trends in the Dakotas. They have to be at least 60% infected by now.

So if the Dakotas don’t fit into the model, we just throw them out and pretend they don’t exist?

Or do we reexamine the model?

Seems obvious to me that you can’t usefully have a one size fits all multiplier. It’s going to vary considerably with differences in testing programs and mitigation factors/efforts. Extreme examples of if you tested everyone tomorrow then there would be no multiplier, just the error range of the test. If you were only testing hospital staff, who the heck knows what the multiplier would be.

So if the Dakotas don’t fit into the model, we just throw them out and pretend they don’t exist?

The US doesn’t even fit into the model and I haven’t seen any evidence that this model fits the data anywhere since the spring (and it was pretty iffy back then).

It’s going to vary considerably with differences in testing programs and mitigation factors/efforts.

This. If we want to answer the questions in the OP, we have to start with decent data and it has to remain consistently decent over time or we can’t measure change. I’m not of the opinion that we have that at this time.

Yeah, even in the spring it was probably only useful as short hand for “we aren’t doing anywhere near enough testing”.

Older folks and those with pre existing conditions could have enormous effects on death rates if they are becoming better educated and hiding out. Another thing affecting death rates in not a small way is better care as we learn how to treat the disease. These two items alone could have major effects on estimating infections just based on death rates and hospitalizations. We would likely be experiencing much higher infection rates than what death rates are indicating. I suspect to one degree or another this is happening.

Older folks and those with pre existing conditions could have enormous effects on death rates if they are becoming better educated and hiding out.

I’m not sure that we’re that much better educated than we were this summer.

Another thing affecting death rates in not a small way is better care as we learn how to treat the disease.

I’ve seen zero compelling evidence that this is true. Almost everything I’ve seen that makes it appear that the IFR is lower now is due to the fact that they attempt to extrapolate IFR from CFR. I’d love to see a study that shows that relationship, but they all appear bogus. The CDC is trying to do truly randomized seroprevalence surveys by testing randomly selected households (I happen to live in one of the communities on their list), which will be highly informative, if local, but I don’t believe they have published any results thus far.

These two items alone could have major effects on estimating infections just based on death rates and hospitalizations.

They certainly could. I just don’t see evidence that either are true so far. Aside from the mask/no-mask conversation, which was resolved pretty early on, I don’t know what other learnings could have had a drastic positive impact on transmission.

Again, I wish that we were awesome and had this thing mostly licked without even needing a vaccine, but there is just nowhere near enough consensus on the issues you want answers to. My guess is that the IFR will be relatively flat over time (with exceptions for medically overloaded areas), if we ever get valid data, but until then, my guess is no more valid than yours nor those who have published papers on the subject.

So the answer to the title of your OP is “Not much of anything right now, aside from raw counts of cases, hospitalizations, and deaths.” You can throw in CFR if you wish, not that it has any useful meaning.

I concur. Perhaps one measure that could shed more light than the guesses being done on CFR/IFR is test positivity percentage, but that is of course fraught with enough reasons on its own for being cautious about extrapolating it. And it’s just a snapshot, after all. Same thing with antibody testing.

Another thing affecting death rates in not a small way is better care as we learn how to treat the disease.

I’ve seen zero compelling evidence that this is true.

It took me 7 seconds on google to find compelling evidence.

Two new peer-reviewed studies are showing a sharp drop in mortality among hospitalized COVID-19 patients. The drop is seen in all groups, including older patients and those with underlying conditions, suggesting that physicians are getting better at helping patients survive their illness.

…physicians learned that resting COVID-19 patients on their stomachs rather than their backs and delaying the use of ventilators as long as possible were more effective practices, say the study authors. Drugs likely helped as well. In addition, other factors such as decreasing hospital volumes, less exposure to infection, and earlier testing and treatment, may have played a role.

It took me 7 seconds on google to find compelling evidence.

Weird, since both of those seem to focus on the ratio of deaths among hospitalized patients. I’m not finding that particularly compelling, since the number of people who go to the hospital because they lost their sense of taste and have a cough/fever has quite possibly increased in recent months. For the record, I don’t find papers/articles (as below) who say the IFR is the same or has gone up compelling either. I’m stating that we don’t know. Show me someone who can accurately give us large scale IFRs and then we’ll have someone who can answer the question. I haven’t found that person yet.

Researchers have struggled to work out whether the COVID-19 death rates are truly dropping.

Recent reports have suggested that Covid-19 has become markedly less lethal in the United States. Our analysis of death rates and infection fatality rates from Arizona, the U.S. as a whole, and New York City shows it isn’t, indicating that public health measures to reduce infections should not be relaxed.

This has led some mainstream media outlets to report that the coronavirus mortality rate is falling. But that’s not true.

The truth is that the bouncing ball of mortality projections has more to do with the inconsistent quality of the data from medical surveillance around the world. Some nations are frankly better at this than others, so variations by country have been significant.

From your last article:

The CFR will eventually reflect people infected today who are still alive but may end up dying later. By comparison, the IFR is a snapshot of where we are today, based on the number of people who have been infected and have died by any given date.

I don’t understand how that is not totally backwards. IFR is not a snapshot of today. We have no real handle on how many undiagnosed infections there are. We do know how many confirmed cases there are by definition. With antibody testing and other tech, we’ll eventually have a better understanding of IFR, not CFR.*

*it’s perhaps true in the sense that theoretically at some point, IFR=CFR, if we gain perfect knowledge.

I don’t understand how that is not totally backwards. IFR is not a snapshot of today. We have no real handle on how many undiagnosed infections there are. We do know how many confirmed cases there are by definition. With antibody testing and other tech, we’ll eventually have a better understanding of IFR, not CFR.

Completely agree. The author of that article seems to have an okay grasp on the definitions of IFR and CFR, but has tortured logic with regards to time frames. I can give you CFR (reported deaths/reported cases)* today for any locale you request. It won’t give me much useful information, but I can certain produce it. IFR (actual deaths from the disease/actual infections), on the other hand, will likely never be accurately calculated for all locales, nor globally.

*I know you’re aware of the definitions. These are for the information of any lurkers who might be curious.

We use artificial intelligence to accurately forecast infections, deaths, and recovery timelines of the COVID-19 / coronavirus pandemic in the US and globally

I thought this was a decent read on this topic.