What are the antibody tests showing now as of late june

I haven’t been following the news on coronavirus lately. What % of people have been infected based on antibody tests though as of late june?

A little over a month ago I think it was around 5-15% of people tested positive for antibodies, higher in places like NYC which was closer to 30%.

Anyone know what we’re at now? At this rate it seems the disease will just hit everyone eventually until there aren’t enough new people to infect to keep the R0 above 1. I think masks don’t work unless 50-70%+ of people wear them, and its not at 70% from what I’ve seen.

Anyone know what we’re at now? At this rate it seems the disease will just hit everyone eventually until there aren’t enough new people to infect to keep the R0 above 1. I think masks don’t work unless 50-70%+ of people wear them, and its not at 70% from what I’ve seen.

There seems to be some concern that the immunity is not long lasting and someone who has been infected but was asymptomatic could lose their antibodies within a few months. That would kill herd immunity unless repeated boosters of a future vaccine can keep the immune system ahead of the virus.

Well shit, this is the first I’m hearing of this. I thought a study out of south korea found that repeat infections didn’t happen and it was false positives.

If so thats going to put a huge wrench in our recovery.

Are there stats on the severity of the disease the 2nd time someone catches it? If it is less severe, it’s not necessarily better for society in general. But would be good to know.

It depends how old the news being referred to is, because I definitely heard this even before the SK study.

I don’t quite know what to believe (possibly because nobody knows for sure?) but this NYT article quotes a couple of credible-sounding experts who say that immunity can persist despite a drop in antibody levels, as well as one who sounds more pessimistic.

A different article, one that omits anything about memory B cells, I read earlier this week mentioned that they think some people are primarily fighting the infection off with T cells rather than antibodies.

There’s a nice paper (preprint) on seroprevalence studies worldwide here . (Folks may or may not recognise the author - John Ionannidis - as a medium famous name in Replication Crisis research … in any case, very reputable.

The paper is actually about trying to estimate fatality rates, but in the service of that they combed the literature for as many good seroprevalence studies as they could find. Mostly pre-May, sadly, iow a bit out of date now, but they quote an estimate from a Brooklyn study, early May, of 47%

. That’s an incredible hot spot, however.

Studies based on testing in May is probably about as good as we’re likely to get right now in the ‘peer reviewed research’ stakes. There may be some more recent data available as just a press release, but I haven’t heard of anything myself.

We’re still a long way off from herd immunity. You need to get a majority of the population immune (some experts say 60% at least). 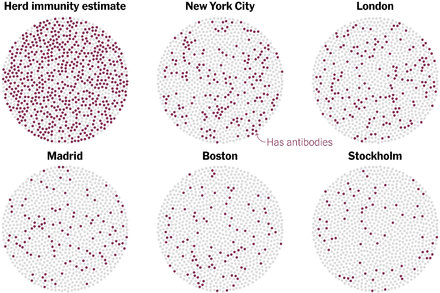 The World Is Still Far From Herd Immunity for Coronavirus

The latest studies show that even in the hardest-hit cities, most people remain vulnerable.

This is from mid may, but NYC was only at 20% and the infection rate has only dropped (in NYC) since. So maybe one of the worst hit places in the country is halfway there?

If the whole country averaged out to 10% w/ antibodies today and the death rate remained consistent we’d be looking at easily a half a million more deaths before hitting the right numbers for herd immunity.

As has often been the case there are problems with even recognizing what is still completely unknown, and lots of reporting that only gives small parts of the complete pictures.

First unknown - to what degree does infection with SARS-CoV-2 confer protection and for how long? Related question being how good is any specific level of specific antibodies as a proxy of that protection or of past infection, especially of milder cases?

Widely agreed best guess extrapolating from other HCoVs is likely quite good levels of protection (but not 100%) for likely 2 to 3 years. But could be less or more. If less then the expectation would be that a next infection would minimally be less severe and likely less contagious.

Known that antibody levels are NOT in general a perfect proxy of protection. High levels are a pretty good proxy of having it, but low levels NOT a good proxy for not, both because of the roles of specific and long lasting T cells, and because of the potential impact of non-specific HCoV antibodies. Unknown if ANYONE has yet had a true re-infection. Would be truly surprising if the number was zero but the evidence to date is very sketchy.

Next unknown: what percent of the population need to be functionally non-susceptible for herd immunity or at least for spread to slow down? Often quoted is the common guess, based on experience with influenzas, of maybe 60%. That said we have learned that this virus in many ways has not behaved as an influenza virus would. There should be no great confidence that that number is correct. Could it be significantly higher? Yes. Could it be significantly lower? Yes. Again there is the unknown degree to which recent and/or frequent past infections with common cold causing HCoVs provide levels of protection and/or decreased transmissibility by way of non-specific antibodies followed by specific T-cell responses. There is the emerging more and more as strong probability that a large segment of the population, children, especially younger children who for influenza are major amplifiers of spread, rarely transmit the infection when they do catch it. IF proven to be true, then there is some significant share of the population, mostly among children, who would function as non-susceptibles in modeling. But unknown.

Known from samples collected long before the pandemic and recently tested that 30% of adults have T-cells that respond to SARS-CoV-2 without ever having been exposed to it.

Known to pretty high degree of confidence: long before true herd immunity a smaller pool of susceptibles will result in a flatter curve during a next wave. Known: herd immunity is not a physical constant but is a number that will be different based on specifics of a specific culture, demographics, and behaviors.

Known - seroprevalence numbers reflect infection rates two to three weeks before they were measured, and then usually about two weeks more before they were reported. Reporting that states a current report as reflect the reality of today is confused.

FWIW. Apply to interpretation as you will.