What can the US House do without approval/involvement of the Senate?

No sure if this is the right forum.

So now the Dems control the House (or will in January). What is the extent of and what are the limits on what the House can accomplish without any support from the Senate? (I’m assuming there won’t be any support.) IOW what can a Democratic House get done on its own?

Honey, if I knew, I wouldn’t be asking the question. <Scratches head> There are some well-informed people here. I hope to be informed by one or more of them.

That’ll teach you to hope.

What do you think she thinks they can do?

IIRC, she’s an American and a senior citizen. How can she not know this?

I wasn’t trying to be rude, I truly don’t understand that mindset.

How can she not not know this, too?
(BY the way, you didn’t answer the fucking question that you responed to in the first place.)

They can run investigations and hold up legislation. No, there’s not much they can do all on their own.

They can run investigations and hold up legislation. No, there’s not much they can do all on their own.

TBH, that’s kind of what I thought. I was hoping I was missing something.

The House, by itself, has little it can accomplish. It has much it can spend its time doing.

It can launch investigations, it can vote on legislation, it can hold hearings, etc. These are all normal legislative functions. But, as noted, if it passes a bill, there’s no guarantee that bill will become law, since the Senate also has to weigh in.

The House can, of course, impeach the President, and any other federal officer or judge. Removal, of course, requires a vote by the Senate.

It can, and will, fulminate.

Someone on TYT said that it doesn’t matter if tRump stops Mueller because the House can subpoena Mueller to testify on what his investigation found anyway. Not sure if that is true or not.

This is not directly related to the OP but I thought it was interesting.

Someone on TYT said that it doesn’t matter if tRump stops Mueller because the House can subpoena Mueller to testify on what his investigation found anyway. Not sure if that is true or not.

This is not directly related to the OP but I thought it was interesting.

Au contraire, that’s the sort of thing I was getting at. How can they move this thing along on their own, given that they will be on their own. Tangential responses welcome.

You left this part out:

The Origination Clause, sometimes called the Revenue Clause, is Article I, Section 7, Clause 1 of the United States Constitution. This clause says that all bills for raising revenue must start in the House of Representatives, but the Senate may propose or concur with amendments as in the case of other bills.
…

The origination clause is almost meaningless in practical effect. The Senate can, and does, amend them into what is effectively an entirely different funding bill. Nothing is stopping the first amendment in the Senate from removing the entire text except for the name from the House passed bill. The two different bills then need to be reconciled to pass anyway.

At the very least, it’s a brake.

Au contraire, that’s the sort of thing I was getting at. How can they move this thing along on their own, given that they will be on their own. Tangential responses welcome.

The investigative powers of the House are quite extensive, if the Democrats wish to use them. For example, the Judiciary Committee could decide to (essentially) reopen the Brett Kavanaugh case. Obviously this would not be a reenactment of the confirmation hearings, as he’s already been confirmed by the Senate, but they could investigate other related matters. Notably, whether he committed perjury in his testimony before the Senate; they could also launch further investigation into the claims of sexual assault, especially in areas unprobed by the FBI investigation requested by Senator Flake.

Whatever might be revealed by such an investigation, it’s very doubtful that this would end up in impeachment, given the current makeup of the Senate and the calcified feelings about Kavanaugh on both sides. But even if impeachment charges were not drawn up against Kavanaugh, the results of an investigation could be extremely embarrassing to Kavanaugh, might put him in some legal jeopardy, and might give the Democrats further ammunition in the 2020 campaign.

[It’s entirely possible, BTW, that if they investigate Kavanaugh, the Dems would be seen as going too far or beating a dead horse, much the way the GOP’s impeachment of Bill Clinton was perceived. So this isn’t necessarily a winning strategy. Just an illustration of the kind of thing that House COULD do, if it decided to use that authority.]

This is an informative article, quite long, and well worth reading in its entirety. 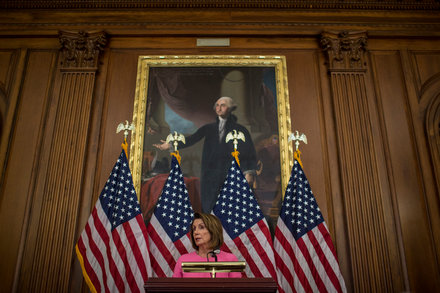 Opinion | Nancy Pelosi’s First Order of Business Should Be to Reclaim the...

This is about much more than Trump.

The Constitution made Congress the subject of Article I for a reason. The most substantial powers of the national government are delineated there. Restoring congressional power — not simply through investigation or rhetoric but ultimately through legislation — would both transcend and serve Democrats’ partisan interests.
…

The reason was that the House’s unique authority over the finances of the national government created leverage over every other facet of policy. Madison wrote in Federalist 58: “This power over the purse may, in fact, be regarded as the most complete and effectual weapon, with which any constitution can arm the immediate representatives of the people, for obtaining a redress of every grievance, and for carrying into effect every just and salutary measure.”

But that requires a willingness to exploit this authority. Madison simply assumed members of Congress would: There was no reason to seek an office except to use its power. Because Congress, and especially the House, fed most directly on public opinion, it enjoyed a natural advantage so overpowering that the framers feared it. In Federalist 48, Madison called legislatures an “impetuous vortex” swallowing up competing powers.

That prediction sounds odd if not laughable to modern ears accustomed to the legislature surrendering its authority. But Madison’s fear turned on the assumption that members of Congress, seeking power, would be loyal to their branch of government first. By providing a mechanism for cooperation rather than conflict across branches, political parties undermine that assumption. One of the profound ironies of American constitutional history is that Madison served as the great theorist of both the separation of powers and the party system. His Federalist 51 said the separation of powers would be maintained by institutional loyalty. But when the Constitution came into force, he observed a need to create political parties to organize public opinion against what he feared was becoming an abusive regime.
…

Saying that they can investigate things is a little bit vague. Specifically, they can do things like subpoena people, have them be held in contempt, etc. Though, since they’re not actually a court, the exact rules around all of this are a bit squishy and could prove to be less than actual if someone ever fought it to the Supreme Court. They like for people to do things voluntarily, because that saves them from having to invoke their uncertain powers in this realm.

When they bring someone in to testify, they can choose whether to do that publicly or privately.

The different oversight committees have specific powers that allow them to do their job of oversight. This can mean anything from seeing banking records, to tax returns, to FBI reports, etc. Traditionally, the chairman (majority party) and the ranking member (minority party), could issue a variety of requests for information from the Executive branch and expect to get a response. Under Trump, last I heard, they were only processing requests that had come from the chairman.

Each Committee can publish a report on their findings. They can release information to the general public - testimony that was taken behind closed door, etc.

One assumes that they can throw a wrench into the gears of any particular branch of the Executive branch through their Oversight powers. Potentially in direct ways (?), but certainly at least by harassing them with frequent, large requests for data and calling people in to be harangued on a regular basis. In general, they don’t have any powers except to see stuff, but I wouldn’t be surprised if they’re part of the system in at least some way - they have to stamp something every once in a while or whatever.

The House would have standing to prosecute the President, a State, or really anyone for anything under which a court decides that the House has standing.

From Wikipedia: “Under the Twelfth Amendment, the House has the power to elect the President if no presidential candidate receives a majority of votes in the Electoral College. The Twelfth Amendment requires the House to choose from the three candidates with the highest numbers of electoral votes.”

The Speaker of the House can become the President, via the line of succession. That’s not something they can force to have happen, but it’s technically part of the rules and doesn’t involve the President.

The origination clause is almost meaningless in practical effect. The Senate can, and does, amend them into what is effectively an entirely different funding bill. Nothing is stopping the first amendment in the Senate from removing the entire text except for the name from the House passed bill. The two different bills then need to be reconciled to pass anyway.

The origination clause can still cause some parliamentary conniptions. During the 2013 government shutdown, the House couldn’t get it’s act together to originate a continuing resolution to end the impasse. So the Senate had to find a funding bill that the House had sent over previously (in this case, regarding tax credits under the ACA) and use it as a vehicle to fund the government and raise the debt ceiling.