What do you think is the best looking guitar?

Yeah I know there can’t be a single best-looking guitar. What I want is what YOU think is the best looking guitar. I’m mostly talking about electrics where there is far more variation in body style and finish, but an acoustic can qualify. Basses, also. With the sheer number of guitar styles out there, I’m curious to see the preferences of other guitarists (or anyone in general.)

As for my personal favorite guitar, in terms of looks, I really like the Fender Deluxe American Ash Telecaster, specifically in that blonde finish. The simplicity and straightforwardness of the Tele design is just very appealing to me. Sadowsky also makes a beautiful flamed maple tele copy.

In terms of basses I like the design of the Rickenbacker bass although I would remove the huge white pickguard. Also, Alembic makes a number of ridiculously beautiful (and ridiculously expensive) basses, of which the Stanley and the Mark King Standard are my favorite.

Paul Reed Smith makes the coolest looking electrics. Also the easiest to play IMHO. The finishes are a step above what other manufactures put out.

That seafoam green Fender Jaguar just turns my crank like nothing else.

I like Santana’s Paul Reed Smith guitar. It seems rather simple looking with a pleasing shape (or at least pleasing to me).

My favorite is a cherry sunburst Gibson Les Paul Custom, with black pickguard and brass hardware. (Mine was stolen). There’s one like it on the cover of Frank Zappa’s “Shut Up ‘n’ Play Yer Guitar” CD, only his has been modified some - different lead pickup and white or pearl covers on the tuning pegs.

I’m also a fan of the Rickenbacker bass, and the sound made by a Les Paul Custom and a Rickenbacker played in the same band.

As far as Fenders go, I prefer the Telecaster (preferably in black). I like the slender headstock more than the Strat’s.

Flying Vs are cool, too.

In terms of basses I like the design of the Rickenbacker bass although I would remove the huge white pickguard.

You can’t remove the pickguard!! Thats what makes it so cool.

Anyway, my favorite looking guitar is the one I own a Gibson ES-335 dot series. But I have always been a sucker for the look of hollow bodys.

My favorite is a cherry sunburst Gibson Les Paul Custom, with black pickguard and brass hardware. (Mine was stolen).

This is my electric (an Epi - hey what am I, Rockefeller?) Sounds like what you’re describing. Image. Sorry yours was stolen!

Yes, that Epiphone looks pretty much like it. An even more beautiful axe is a Les Paul Custom Black Beauty, with three pickups and brass hardware. I played a solid white one once, too.

My favorite is a Les Paul Gold Top. I am kinda biased as that is what I play right now.

I like the '66-'67 Stratocaster with the big headstock/transition logo, dark Brazillian rosewood fretboard and a three tone sunburst finish.

Anyway, my favorite looking guitar is the one I own a Gibson ES-335 dot series. But I have always been a sucker for the look of hollow bodys.

DINGDINGDING! Should I ever buy another guitar (and since my playing has seriously dropped off to virtually nil, it’s tough to justify), a cherry red Dot is my dream.

Here’s an acoustic for ya.

Tacoma makes an awfully pretty guitar. I’m partial to the Papoose, which has a red cedar top and a paisley-style sound hole. I’ve never played one so I can’t vouch for the sound, but they’re very nice to look at.

I don’t play, but if I did, I’d want a simple sunburst Stratocaster. Beautiful in it’s simplicity.

DINGDINGDING! Should I ever buy another guitar (and since my playing has seriously dropped off to virtually nil, it’s tough to justify), a cherry red Dot is my dream.

The famous Cherry Red ES335 Block Inlay model as played by Eric Clapton when he was in Cream is without doubt the sweetest axe ever made.

And guess what? In 1968 Gibson made 5 replicas of his famous axe so he could take them on the road touring and leave his prized possession in safety back at home.

And guess what else? In 2002, one of 'em came up for sale on eBay and it cost me $18,500 US Dollars. We verified the serial numbers with Gibson and everything. It’s the real deal. And on the Gibson Custom Historic webstie you can actually buy that model now in perfect replica - such is it’s fame. The most amazing guitar you’ll ever play. Honestly.

And it arrived from America the day my first child was born. Guess what my daughter is getting when she turns 16?

Here’s a link to the famous Eric Clapton ES335

I’m a sucker for hollowbodies, like the Gibson someone linked to above, and the beautiful Gretsch guitars associated with Brian Setzer. I also think the Stratocaster is a timeless blend of American art, craft, architecture, and science, much like Art Deco buildings and classic cars of the late '50s, bedecked with fins and chrome.

I’d still love a Telecaster of my very own, though…

Still, for something totally different, the Dan Armstrong Lucite guitar always is quite the attention grabber - but still aesthetically pleasing. 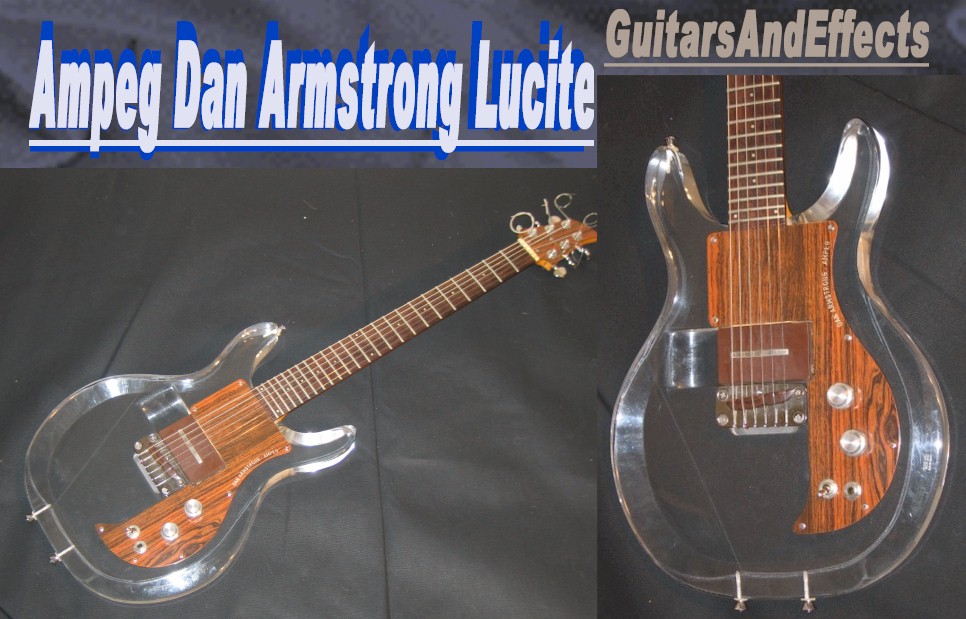 Here’s an attention grabber that is *not *aesthetically pleasing:
http://photobucket.com/albums/y151/wolf_meister/?action=view&current=airstream.jpg
Yes, that guitar is for real.

I play a sunburst '57 reissue Strat, with the maple neck. No lime green pick guard and hardware, though, that’s a little much. I like it, it serves my purposes, and it plays well and sounds great through my Fender tube amp.

But the objects of my lust right now are acoustic. I’m a bit of a purist, give me a Martin dreadnought and I would be a happy man. Makes me drool a bit. I’m not willing to spend the $2200 or so that a good Martin costs, so I’m on the verge of buying a cheaper acoustic. The catch is my uncle is a luthier and he has promised me a custom guitar sometime next year. So that then will automatically become the best looking guitar ever to me.

That said, the best value for money I’ve found in the acoustic realm is this new brand of Chinese guitars, Blueridge. The Blueridge BR-160 plays and sounds like an absolute dream and you can get them well under $1000. Unfortunately, it is also the single ugliest acoustic I have ever seen, with a horrible tortiseshell pickguard and really, really tacky, overdone abalone inlay on the headstock and the rosette. I’d definitely buy one yesterday if the same sounding guitar was available without the crazy ornamentation.

The Gibson ES-175 was the guitar of my dreams…and now that I have one, I luuuuuuve it.