What is the meaning of Christmas?

What is the meaning of Christmas? Why do people celebrate it? Why is this holiday so important in American culture that big department stores will display holiday sale signs and advertise intensely during this time of year? How many people celebrate this holiday worldwide? Is this a Christian holiday? Why is Christmas such a popular holiday in the United States but Michaelmas isn’t (for I have never heard anyone say, “I am observing Michaelmas”)? Is the purpose of Christmas the belief of a white-bearded jolly old man named Saint Nicholas / Santa Claus? What do Santa and the Easter Bunny have to do with Jesus Christ’s birthday and resurrection? Can anybody make a connection?

Note: I know that Jesus Christ was not born on Christmas Day! Still, I wonder why Christmas is such an important holiday.

And there were in the same country shepherds abiding in the field, keeping watch over their flock by night. And, lo, the angel of the Lord came upon them, and the glory of the Lord shone round about them: and they were sore afraid. And the angel said unto them, Fear not: for, behold, I bring you tidings of great joy, which shall be to all people. For unto you is born this day in the city of David a Savior, which is Christ the Lord. And this shall be a sign unto you; Ye shall find the babe wrapped in swaddling clothes, lying in a manger. And suddenly there was with the angel a multitude of the heavenly host praising God, and saying, Glory to God in the highest, and on earth peace and goodwill towards men.

And that’s what Christmas is all about, Charlie Brown.

This is what I’ve heard.

Note: I know that Jesus Christ was not born on Christmas Day!

And what a freakin’ coincidence that is too!

What is the meaning of Christmas?

Eggnog. Also, some shit about the spirit of generosity and the messiah or something. But mostly that’s the nog talking.

Read “Christmas” backwards, and you’ll have your answer.

What do Santa and the Easter Bunny have to do with Jesus Christ’s birthday and resurrection? Can anybody make a connection?

The origin of the US’s Santa Claus: 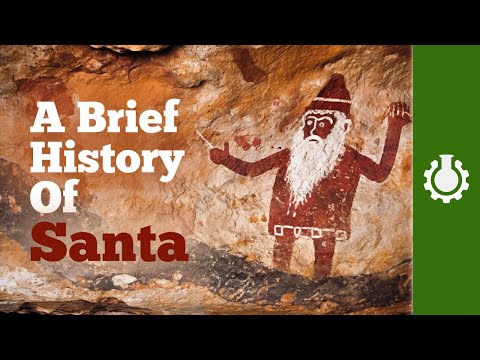 Easter, which officially celebrates the rebirth of Christ, is scheduled in the spring, right when the natural world is also entering a phase of rebirth. If you were looking for natural representations of rebirth, you could do a lot worse than bunnies, who fuck like themselves (leading to baby bunnies) and eggs, which are literal encapsulations of birth.

I believe in The Christmas Spirit. It’s this weird impulse that comes over people and turns selfish assholes into generous givers for a few weeks every year. Not just the obligatory gifts to family thing, but gifts to charities increase, and soup kitchens finally have enough people to run things.

I’m not a Christian, so I don’t believe in or care about the birth of Jesus Christ this time of year. Yet I share the urge to give a little more, to be a little nicer to people this time of year. I observe the Solstice, and celebrate the renewal of light (both literal an figurative) and the days growing longer. In my part of the world, winter is just getting started, but the dark has been getting longer and longer for some time now. Every year, just about when I start really feeling oppressed and depressed by the darkness, it’s time for Solstice, and the reminder that the light will come back, that tomorrow will be infinitesimally brighter longer, and that my life, as dark and difficult as it’s been, has another chance to brighten with it. With that hope and relief, comes that feeling wanting to open up more, come out from my self-imposed hibernation, and give Stuff to other people. It’s this midwinter urge from our Cavman brains, chemically encouraging us to share our bounty so we all survive the dark time, I think. (Which makes me wonder how I’d feel about Christmas if I lived in the southern hemisphere.)

But, lest you think I lose all cynicism in this post, I think the answer to “Why is Christmas such a popular holiday in the United States but Michaelmas isn’t” is: marketing. It’s kept Christmas in our consciousness, drawn our attention to that midwinter urge, so that people can make money. Christmas used to be a fairly modest holiday; it’s gotten louder even during my short lifetime.

It probably helps that it’s the mass day probably easiest to tie gift-giving to. The Magi bringing gifts, the St. Nicholas tale, etc. But trust me, if Best Buy thought that a Michaelmas Sale would bring in more money than it’d cost to print the signage, they’d do it.

But, lest you think I lose all cynicism in this post, I think the answer to “Why is Christmas such a popular holiday in the United States but Michaelmas isn’t” is: marketing. It’s kept Christmas in our consciousness, drawn our attention to that midwinter urge, so that people can make money. Christmas used to be a fairly modest holiday; it’s gotten louder even during my short lifetime.

I think we can can thank the likes of Dickens, also, who helped romanticize the whole Christmas phenomenon.

I think Steve Martin said it best: You Tube link.

Because it generates $$$, the country having successfully divorced Christmas from Christianity.
Because we need an excuse for a party at this dark, cold time of the year.

Because we need an excuse for a party at this dark, cold time of the year.

Which is likely how it all started in the first place.

The meaning of Christmas to me is God’s family is our family, and that is the reason to celebrate.

That’s what Christmas is all about, Charlie Brown.

Because it generates $$$, the country having successfully divorced Christmas from Christianity.
Because we need an excuse for a party at this dark, cold time of the year.

That might have been true, but in truth Christmas and Christianity were never married in the first place.

It was more like a several century long Patty Hearst-like abduction.

Moved from GQ to IMHO.

Huge mass hysteria whipped up to make people buy more shit they don’t need, all soaked in the most random mythological hodge-podge this side of a Disney movie? At least that’s what it looks like from here.

I’m finding myself asking this a lot the last few days. What the hell are we doing, why do we go to all this trouble?

We all know we have more stuff than we need and we are trying to figure out how to get rid of a lot of the presents we were given within days of receiving them.

We all know that lots of the Christmas cookies and sweet breads we get go stale and get thrown out and yet we keep making them and giving them.

We’re all tired and cranky by the end of the day and even people like me who have great families have been irritated to their last nerve.

I think the “we need a party” is about the best explanation we’re gonna get…that and it’s just what we do…it’s a self-replicating cycle…so many memes…opting out means being a Scrooge, a Grinch, a Mr. Potter.

I did come up with an alternate theory this morning as we listened to our youngest’s phlegmy cough while opening presents. My husband asked why people are always sick at Christmas.

Hmm. Maybe we have Christmas so we can get sick. You know how some viruses can change the host’s behavior? Maybe viruses actually would naturally have a harder time moving around in the winter as we stay inside more, slow down and go out less.

If the virus can get us to go out and shop, travel across the country, hug people, share food, and so on, it gets access to many more hosts.

Originally, Christmas was yet another Christian borrowing from European paganism.
When we had a festival to celebrate the return of the sun at Solstice, and Mithraism had a festival just a few days later, the two were merged by the early church into a single festival.
The entire concept of gift-giving is bound up in old traditions.
Add in ‘A Christmas Carol’ and Coca-cola’s remaking of Santa Claus, mix in mercantilism and marketing and voila there you have it.

I have nothing to contribute, except to say that hey, I learned a new thing today! I hadn’t heard of Michaelmas before, but I should totally throw a party for it next year.