What is the Straight Dope on Yelp (review site)

I was reading this thread over on consumerist:

I have heard this type of comment over and over on the intertubes re: Yelp

“First off…yelp is a scam. They call registered businesses and if you dont pay them for an account, good reviews get removed, and bad reviews bummped.”

I myself am a member of Yelp and have posted a dozen or so reviews. All I’ve really noticed so far is that Yelp does re-arrange reviews so they are not in chronological order, which doesn’t seem to make any sense to me.

I have also ready their FAQ where they vehemently and repeatedly deny that they are corrupt.

So what is the deal with Yelp? 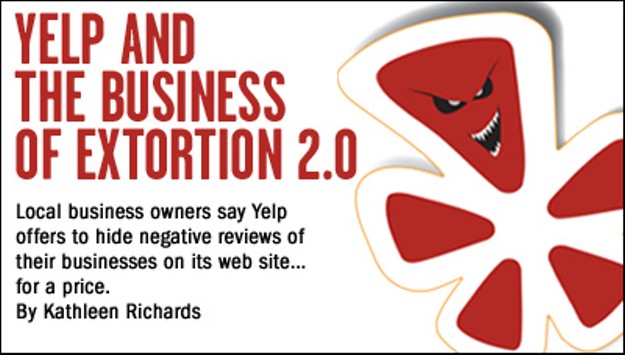 Yelp and the Business of Extortion 2.0 | East Bay Express

Local business owners say Yelp offers to hide negative customer reviews of their businesses on its web site ... for a price.

The phone calls came almost daily. It started to get creepy.

“Hi, this is Mike from Yelp,” the voice would say. “You’ve had three hundred visitors to your site this month. You’ve had a really good response. But you have a few bad ones at the top. I could do something about those.”

I’ve followed these stories about Yelp for a while, and the number of business owners claiming mild extortion (like in Measure for Measure’s article) is just too large to dismiss. I’m not sure if Yelp’s practices have changed any since this stuff made it into the public consciousness.

As the story notes, the very nature of their business model encourages this sort of unethical behavior. Their product is reviews of businesses, and they make money through advertising. It’s not much of a stretch to think that they might try to increase the latter by making promises (or threats) about the former.

The story linked in your OP is a bit different, though.

In that case, after the story about Lehigh Pub surfaced on the internet, hundreds of people who had never visited the pub wrote negative reviews on Yelp. Yelp’s own FAQ states explicitly that reviews are meant to be based on first-hand experience, not on general reputation, hearsay, or second-hand accounts. So a bunch of people who have never been to the pub, but who post reviews based on a news story, certainly violates those conditions.

Also, even if Yelp themselves are not engaged in any nefarious practices, it’s still worth using a rather cautious eye when reading the reviews.

Business owners and employees can easily place positive reviews on the site themselves, and there’s also nothing to stop a competitor from posting a negative review in an attempt to sabotage someone.

More generally, while a small percentage of Yelp reviewers are serious reviewers who write about lots of businesses, in many other cases it’s clear that some people sign up specifically to write about one business where they had a bad experience. While there’s nothing unethical about this, even great businesses have some malcontent customers, and bad days where they fall below their usual standards, so it’s probably not fair to judge a business based on the complaints of (what appear to be) a few atypical cases.

I also tend, rightly or wrongly, to judge Yelp reviews based on how descriptive and reasonable they seem. If it’s a one-line review saying “This place is the suck!!! Don’t go there!!!” i usually just ignore it. But if the criticism is substantive, and appears to be based on specific reasons or problems, then i’m more likely to take it seriously. Similarly, if the review just says “This place is awesome!!!” i’ll move on to the next one, but if it’s a detailed review that praises specific things, then i’ll pay more attention.