What is the Tea Party up to?

I haven’t heard anything about them primarying against any Pub incumbents this year, nor turning out to campaign for them either. Of course, it’s very early for the latter anyway. But has the TP given any sign of showing any presence yet for this cycle? Any hint of what kind? 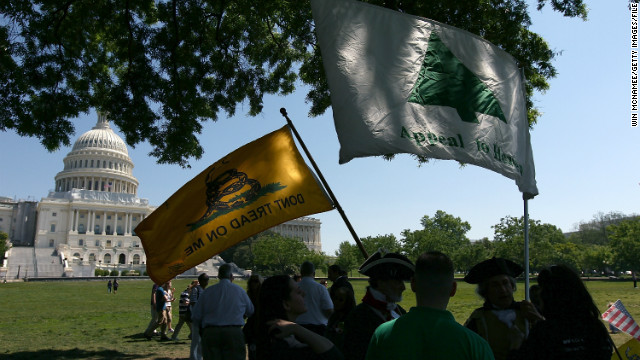 While loud and raucous rallies are still a part of the tea party toolbox, the movement, which came to life over dissatisfaction with big government and anger over government bailouts and President Barack Obama's health care reform, is evolving.

They’re active. They’re doing a lot in Indiana, where they’re campaigning for Mourdock. They’re also trying to get rid of Hatch in Utah.

They’re active. They’re doing a lot in Indiana, where they’re campaigning for Mourdock. They’re also trying to get rid of Hatch in Utah.

There are seriously people for whom Orrin Hatch is not conservative enough?! (With Richard Lugar, I can understand, the gun-rights people must hate him and so must the warhawks.)

There are seriously people for whom Orrin Hatch is not conservative enough?! (With Richard Lugar, I can understand, the gun-rights people must hate him and so must the warhawks.)

Tea Party people hate Orrin Hatch. He voted for TARP, and he’s got a long tradition of bipartisanship and working with Democrats on stuff.

“I enthusiastically welcome their efforts,” the Democratic Senatorial Campaign Committee’s Matt Canter said. “I mean, the tea party did more than anybody or any thing to prevent Republicans from taking the majority in 2010. And so far they have caused divisive primaries across the country that are hurting Republican chances in nearly a dozen states.”

Canter continued: “They are having a major impact on the Republican agenda, nationally, and moving the party further and further to the far right – and further away from the middle class that’s going to decide the election. So more power to them.”

CNN Senior Political Analyst Ron Brownstein said despite the efforts, the movement may come up short.

“The tea party is basically a mobilization of existing constituencies within the kind of the Republican coalition. And its impact was enormous in 2010 in part because we were dealing with a smaller electorate,” Brownstein said.

“The challenge for the tea party in 2012 is a bigger electorate with more casual voters who tend to be younger and more minority – its influence is inevitably going to be diluted from what it was in 2010.”

“The other problem they’ve got is that, in 2010, they were able to generate enormous energy in a backlash against what Obama was doing,” he said. “But the kind of a solution they favored clearly doesn’t have majority public support either. And their ratings have gone down.”

Apparently, the Tea Party focusing is on the Senate this year.

For Tea Party, Focus Turns to Senate and Shake-Up

By JENNIFER STEINHAUER and JONATHAN WEISMAN

WASHINGTON — The primary victory of a Tea Party-blessed candidate in Indiana illustrates how closely Republican hopes for a majority in the Senate are tied to candidates who pledge to infuse the chamber with the deep-seated conservatism that has been the hallmark of the House since the Republicans gained control in 2010.

Richard E. Mourdock, who last week defeated Senator Richard G. Lugar, a six-term incumbent, promises to bring an uncompromising ideology to Capitol Hill if he prevails in November. And he is not the only Senate candidate who contends that Senate Republicans are badly in need of new blood.

In Arizona, Missouri, Nebraska and Texas, Republican Senate candidates are vying for the mantle of Tea Party outsider. A number of them say that they would seek to press an agenda that is generally to the right of the minority leader, Senator Mitch McConnell of Kentucky, and that they would demand a deeper policy role for the Senate’s growing circle of staunch conservatives.

Some say they have not decided whether they would support Mr. McConnell, who could find himself contending with the type of fractious rank and file that has vexed the House speaker, John A. Boehner of Ohio.

Tea Party people hate Orrin Hatch. He voted for TARP, and he’s got a long tradition of bipartisanship and working with Democrats on stuff.

House Speaker John Boehner set the conservative blogosphere afire yesterday, when Politico’s Jake Sherman reported that the House GOP leadership would seek to reimplement popular parts of health care reform should the Supreme Court strike the entire law down next month. The pushback—and immediate retraction from Boehner—illustrates once again that the far right has the GOP leadership on a very short leash.

According to the story, Boehner briefed his colleagues on a contingency plan to reinstate both the requirement that keeps young Americans on their health insurance plans until age 26, and the laws that forbid insurers from discriminating based on pre-existing conditions. He believes that it’s “too politically risky” to rip those provisions from the law.

Boehner is quite right, but this sounds like fingernails on sheet metal to the Tea Party, which has spent the last two years fulminating about the socialistic, dictatorial, no-good, very-bad Obamacare. And the reaction from the hard right was swift.

“If this is true I have had it. I’m calling out John Boehner right now,” said powerful radio talker Mark Levin last night. “Look how fast they fold like a cheap tent.”

Despite this, yet! (Some people are never satisfied . . .)

Wait, so, if they want to put the thing about pre-existing conditions back in, but with the mandate gutted, what stops the system from collapsing? Are they just trying to blackmail the insurance companies or something?

Wait, so, if they want to put the thing about pre-existing conditions back in, but with the mandate gutted, what stops the system from collapsing? Are they just trying to blackmail the insurance companies or something?

Don’t worry; the all-knowing invisible hand of the market will take care of it perfectly, if that dadgum government will just get out of the way.

Ah, here’s what the Tea Party is up to this year: Voter suppression! (True the Vote is an outgrowth of a Texas TP organization, the King Street Patriots.)

My Tea Party Facebook friends are leaving cryptic messages such as “Pay no attention to the man in front of the curtain. Everything is going as planned.”

And, no, I don’t know what they mean.

Luca Brasi sleeps with the fishes.

The crow flies at midnight.

In women’s tennis, I always root against the heterosexual.

My cat’s breath smells like cat fo-- no, that’s overused.

When come back, bring p-- nah, that’s no good either.

C’mon over here, baby and lick the side of my neck the way I like.

The caged whale knows nothing of the mighty deeps.

In women’s tennis, I always root against the heterosexual.

There are no good white basketball players.