What Is This Symbol?

I have to tell you, I have been interested in religious symbolism at least since high school. Back then I was especially interested in the talisman from the 1958 horror film The Thing That Couldn’t Die. Here is the the talisman from the movie. If you didn’t see it, it was the only thing that could keep the evil head at bay. It consisted of a cross (symbolizing faith or Jesus), the anchor (symbolizing hope), the crown (symbolizing courage, according to the movie) and the fleur de lis (symbolizing the three theological virtues, again according to the movie).

Anyways, I might as well tell you. I am very agnostic now. And maybe even quasi-atheist. I should tell you that first. But I got a symbolic piece of jewelry, from a dollar store, and about twenty years ago FWIW, that has me wondering. What does it symbolize? And what does it mean?

Here is that symbol. You will notice, it has the anchor too, and the cross. But what is that thing in the middle? Looks like a Sun. Is that what it is? And what does that symbolize?

You know, I am not asking anything. But I would just love it if someone downloaded both images to this thread. Because I can’t do it myself.

Yes, I’ve tried. And yes, yes, rest assured I have tried ALL your various advices on how to do it

Thank you in advance for your helpful replies

Looks like a Mariner’s Cross, like a sailor would wear, with an anchor superimposed on the crucifix. 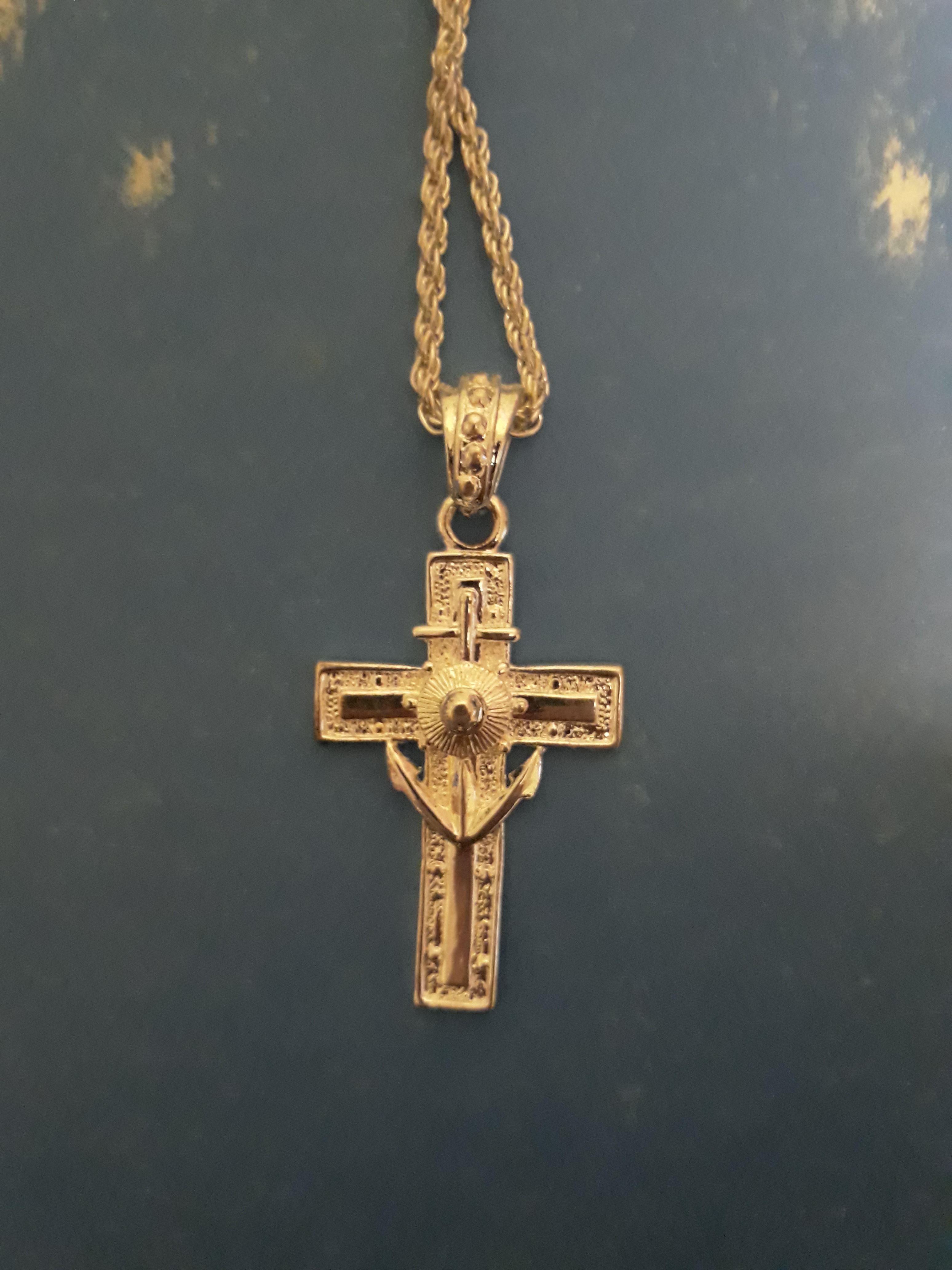 Looks to be a French version of the British naval cross.

Anyways, I might as well tell you. I am very agnostic now. And maybe even quasi-atheist.

The 'Flos Carmeli' Has Never Failed For Me ONCE Great Debates

Actually, some of you may not remember. Or some of you may have not been here even then. But I brought up this prayer and my devotion to it in 2007, when my father was in bad shape. Anyways, I do still believe in God. And if part of his attributes are human and personal, why the heck can’t you pray to him? That’s what I say. Here: Prayer of St. Simon Stock Known as the FLOS CARMELI, the following prayer has for seven centuries been called a prayer to the Blessed Mother which has never been kn…

Looks like a mariner’s cross to me. That’s not a sun in the middle, it’s a steering wheel, as indicated by the spokes/handles one uses to adjust the rudder.

I wasn’t going to say this, because it has nothing to do with the question. But I assume it was clear what I meant by quasi-atheist.

Now: what on earth could the symbol mean (remember it was a dollar store, if that means anything)?

Now: what on earth could the symbol mean (remember it was a dollar store, if that means anything)?

Did you see my response in post #2? It’s a Mariner’s cross, with an anchor and a ship’s wheel. You can see the little handles on the outside edge of the wheel.

@FinsToTheLeft In addition to that theory

And BTW, it doesn’t look at all like a Mariners cross to.

I own a Mariners cross. I’ve seen many Marines crosses. I was even there when they first came out. And, sir, that is no Mariners cross. (Old Lloyd Benson joke—you’d have to be old enough to remember

Looks like a squid rather than an anchor. Maybe a image related to Cthulhu in some way, which would certainly link to a film about The Thing That Couldn’t Die.