What replaced saloons and bars during Prohibition?

Obviously I know about speakeasies, but I mean more in the sense of “Where did people go legally for social beverage consumption, perhaps with some live entertainment, instead of going to a bar or the saloon they used to go to?”

Did coffee houses fill that gap, or was there something else?

Night clubs were legal and popular and people went there to watch live entertainment and dance. AIUI they would usually buy their hooch from someone and bring it with them into the club to consume.

Alcoholic beverages were also legal if purchased with a prescription, and churches and synagogues could have them too. People also did their own home brewing, occasionally with disastrous results.

turn the product into wine.

My great grandfather ran a saloon in Milwaukee WI, until prohibition occurred. He turned it into an Ice Cream and Soda parlor, which of course had a still to make bathtub gin in the back, where that and other illicit beverages were served.

I’m told it was a ‘tough as nails’ ice cream and soda parlor, with spittoons, a baseball bat behind the counter, and great grandpa’s sour attitude towards anyone who wasn’t actively giving him money. So the live entertainment was him fighting with patrons. I suppose that could be called dancing too.

Juarez, if you lived close enough. Growing up in West Texas, I heard those were boom years for the border town.

Back in the 1920s, Mexicali was a popular place for Californians to go for drinks and entertainment. This didn’t sit to well with a lot of Mexicans who were losing jobs in the booming entertainment industry to foreign workers from the United States.

Alcoholic beverages were also legal if purchased with a prescription, and churches and synagogues could have them too. People also did their own home brewing, occasionally with disastrous results.

I recall that Churchill had a “note from his Doctor” or something like that to bring whiskey with him when he visited FDR.

Likely a visit to the US when he was in the political wilderness and before FDR became president.

My great grandfather ran a saloon in Milwaukee WI, until prohibition occurred. He turned it into an Ice Cream and Soda parlor, which of course had a still to make bathtub gin in the back, where that and other illicit beverages were served.

I know of two breweries that converted to making ice cream in order to stay in business. One in Detroit Michigan (Stroh’s) and the other in Chippewa Falls Wisconsin (Leinenkugel). Stroh’s ice cream is still available in Detroit.

Back to the OP’s question: Prohibition coincided with some of the famous “dance halls” in Detroit, which had milk bars. The local Detroit PBS station used to periodically broadcast a show called “Detroit - Remember When?” that had a segment about the dance halls and other popular amusements.

Absolutely not–at least, not until the last few months. The Volstead Act forbade anything with greater than 0.5% alcohol. Not until March 1933, when the Twenty-First Amendment was already in process of ratification, did Congress amend the Act to allow beer.

I recall that Churchill had a “note from his Doctor” or something like that to bring whiskey with him when he visited FDR.

True about the note, but he wasn’t visiting FDR. It was 1931-32, and Churchill was in the US on a lecture tour.

Thanks, Freddy. That must have been mentioned in an FDR book, or perhaps I encountered it in Churchill’s World War Two series.

Interesting insights so far. Thanks everyone!

Speakeasies were everywhere. They were ignored by the authorities, at least in major cities, 99% of the time. When they got raided, they moved down the street, changed their name, and reopened. What’s remarkable about Prohibition is how totally openly people violated the law. People who wouldn’t go into saloons in the past now started frequenting them. Commentary at the time constantly railed at the law-breaking and predicted doom. (Just like every other decade since.)

Night clubs also violated the law virtually every day. Sometimes they did it without subterfuge, other times they poured alcohol into cups when you ordered tea, or they allowed, as dolphinboy said, people to bring in their own bottles (probably actually flasks). The times called for entrepreneurial cleverness and owners responded with flair and originality.

The twenties added an additional new factor. Women mostly did not go to bars before Prohibition; night clubs and speaks were new ways for middle-class couples to go out together for live entertainment. Their proliferation was less a replacement of what came earlier than a modern adaptation to changing conditions.

There was quite a bit of entertainment and dining out to be had during Prohibition without alcohol.

It wasn’t simply a matter of speakeasies and other dodges allowing people to drink just as much as they did before the Volstead Act became law. Alcohol consumption in the U.S. actually did decline significantly from 1919-33. 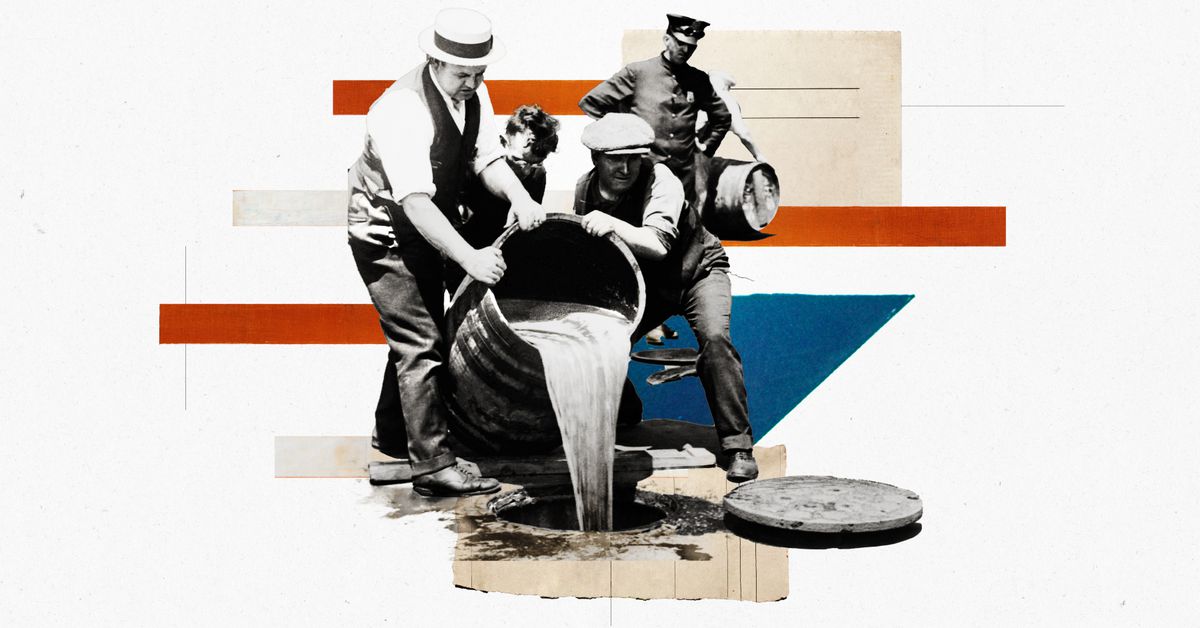 Prohibition worked better than you think

America’s anti-alcohol experiment cut down on drinking and drinking-related deaths — and it may have reduced crime and violence overall.

In my town (which never reached full prohibition), the same impulse which led to repeated prohibition votes and local prohibition, also supported the big ‘coffee palaces’ and one well-known ‘soda fountain’ (based, I guess, on the American model. Were soda fountains ever a European thing?).

On the other hand, my ancestor in Michigan apparently enjoyed the odd ice-cream-in-beer with his golf buddies. His son would get a root-beer float at the same time, which I suppose was the cover story.

Back then more people belonged to company, union, or church social clubs, including Bowling Leagues, Choirs, Baseball Teams…so a meal at a club hall, public park, restaurant, or diner, or a quick get-together at a doughnut shop, or coffee bar was also a thing.

My grandparents lived in San Francisco before, during, and after prohibition, and they once said that there was no trouble getting alcohol in clubs, speaks, or restaurants. It was available pretty much everywhere. The challenge was getting the “good stuff” as opposed to the watered-down or bathtub crap.

Every once in a while the police would raid a nightclub and it would make headlines in the local paper, but I think that was mainly for show. My guess is that the police and federal authorities were mostly on the take, and since selling alcohol was a cash business, everyone profited except the poor schmuck who happened to get shut down.