What should I do about this miserable plant I found in my room? 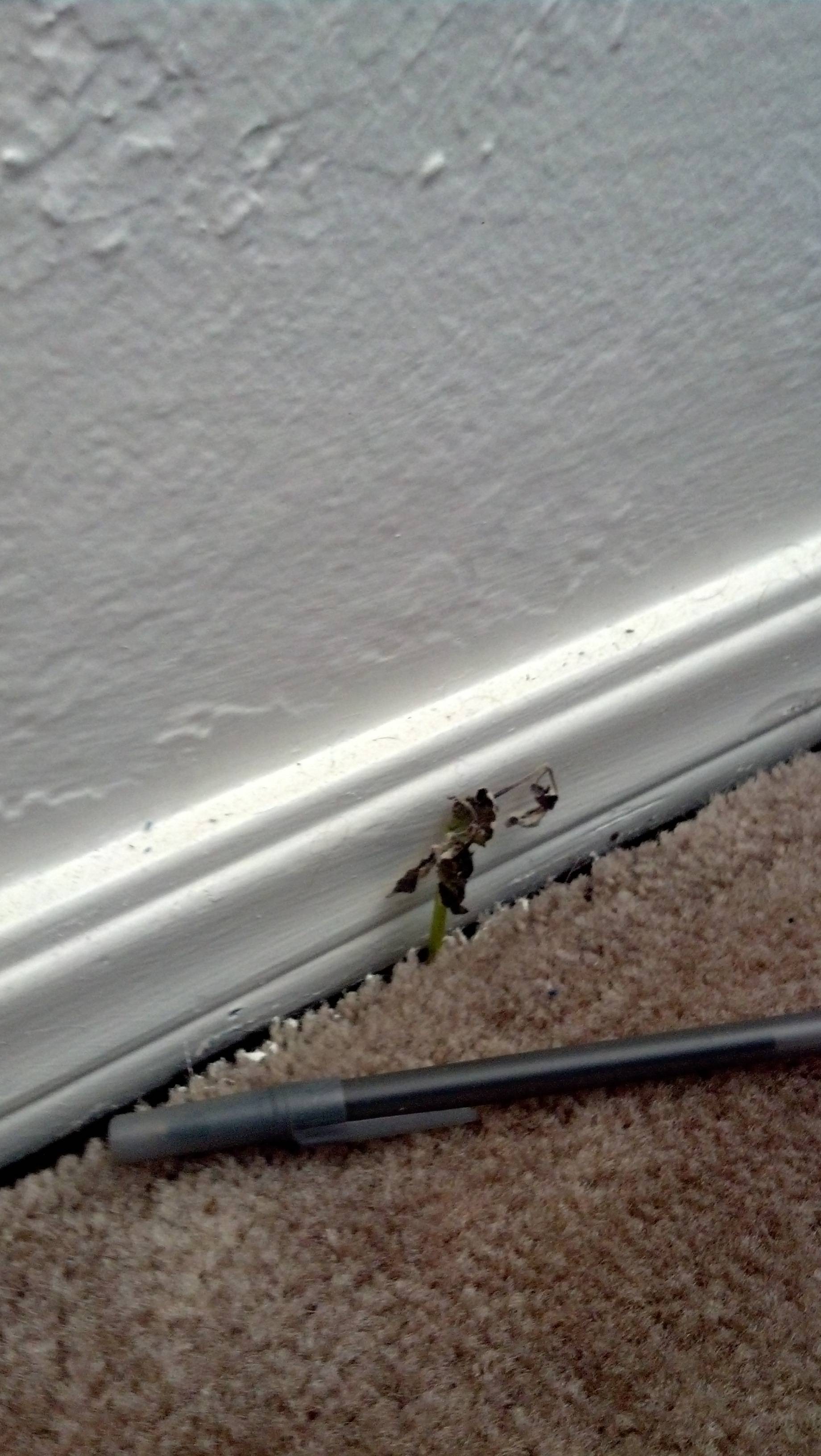 I’m renting a ground-level apartment for the first time. The east wall of my bedroom isn’t flush to the floor, by about an inch at most (the carpet goes slightly over the edge of the actual concrete), but I didn’t think anything of it when I moved in. It (doesn’t seem to) be open to the outside, anyway, and it’s only this one exterior wall in my room of the whole house, so when I moved in (September) I just didn’t think anything of it. Normally my bed is pushed up against this wall.

Today I pulled the bed out a little to make it and here I see this miserable little plant that has sprung up out of this crack. The last time I pulled the bed out for any reason was about ten days ago, and this wasn’t there, but I wasn’t really paying attention (I was talking to someone while I pulling the sheets off to do laundry). Almost zero light reaches this spot, and, I haven’t seen any moisture accumulations or mold.

I’ll try to get a better shot when I come back later in the day. It seemed like the plant stem was curving back around into the concrete under the floor, and NOT towards the outside, but I would have to find a little mirror to lower down in there and make sure of that.

So, can anyone ID it, or tell me what I should do about it? I’m obviously not going to just leave it in but I figured someone here has seen this kind of thing before. Should I pull it or do they make a kind of herbicide which is safe to use in a bedroom? Could it represent a bigger problem? Is it the kind of thing I should call the landlord about, and if so, before or after pulling it?

Before anyone casts aspersions on my habits, it’s all the more bizarre because we keep the house pretty clean, and again, I haven’t seen any moisture or infiltration problems anywhere in the entire house. If you need to know any more about the construction of the house I can post more pictures later on.

Some plants can grow though cracks in a wall from the outside. Which is not a good thing. You definitely may want to take this issue up to your landlord. They need to patch or seal that crack. Could very well be a structural issue too.

Some plants can grow though cracks in a wall from the outside. Which is not a good thing. You definitely may want to take this issue up to your landlord. They need to patch or seal that crack. Could very well be a structural issue too.

I agree. As a former resident manager, I’ve seen how a tiny problem can grow into an enormous project if ignored for long enough. Property owners really do rely on tenants for information like this. Even a slum lord is going to get worried if his foundation or walls have cracks in them.

(Also, some lease agreements can hold you liable for damage caused by your failure to report a problem.)

pull it out, its already dead or enough dead to call it that.

If you feel bad about the poor little thing, plant some tomato seeds in a pot in its honor. It will be a nice memorial and a way for you to remember the little plant that tried against all odds.

Thanks, everybody. I looked on the other side of the wall for obvious holes and couldn’t find any; it’s just loose dirt with grass that stops 1-3 inches short of a brick wall.

For what it’s worth the plant is also significantly more dry and shriveled than it was just a few hours ago. It rained here for a couple hours this afternoon. Is it possible to speculate whether I can use this as a hint that it is or isn’t connected to an outdoor root system? Or maybe it’s just the plant killing these leaves because there’s not enough light here to sustain this branch.

I’m going to call the office first thing in the morning and let them know about it, and just leave it there to easily find it.

Look for a passion fruit vine somewhere near by. I have it spring up in my wall heater, and sometimes near baseboards.