What state governments are acknowledged as handling this well?

Note that this will not necessarily be the states with the lowest numbers in any particular category, which is why I’m having a hard time determining this. Plus, it’s at least partly perception, and I’m not sure how good mine is when looking at the field of fifty.

Maryland has been having some ups and downs lately but for the most part they are keeping the “states with Republican governors” numbers from looking extra, extra horrible.

My state, Massachusetts, for one. Our stats were awful in the beginning; we got the New York infection in Boston and the eastern big towns. But it was fought and fought hard, and our stats have looked good since May. Baker is another Republican governor who deserves a lot of credit.

Of late only 2 states are seeing a decrease in new cases NJ & Arizona.

I think it goes without saying that even NY & NJ should have been doing more earlier, but you know, they were foolishly relying on the Feds & CDC.

My state, Massachusetts, for one. Our stats were awful in the beginning; we got the New York infection in Boston and the eastern big towns.

The Biogen conference was apparently the source for our early infections, which would mean we likely imported it from Europe.

In-depth interviews featuring candidates running for the MA 4th Congressional District.  The State Primary is September 1st and the General Election is November 3rd.  The winner of the race will su…

I agree about Massachusetts. Even in the red-leaning suburb I live in, almost everyone is wearing a mask. Between that and the governor taking it seriously, and early, i’ve been impressed with how quickly it got clamped down given how massive it was in the beginning.

NY and NJ were blasted by the early super-spreader event, and then made some serious missteps in the beginning, but no one really knew what to do yet. Since then, I think they have been excellent at managing this disease, especially given the population density in NY and all of northern NJ.

They set some re-opening plans, and then backed off when it looked like it was too soon, for example. They’ve discouraged people from hotspot states from coming in. All in all, a fine job, after bad early screw-ups.

What’s driving me crazy is that, if the rest of the country heeded our example, we could be past this. Grrr.

Ohio DID well early, combo of DeWine-R and Dr. Amy Acton, took early actions to close/cancel events and spread the word (I think even before SXSW was cancelled which I think was the first biggie).

Then the reopening plans were unveiled where he included and then within 24 hours backpedaled on a mask requirement; not too long after, Dr. Acton “stepped down” to an advisory position and seemed to disappear (she was being targeted/harassed, but it was sudden, surprising and now she seems to be a ghost, so hmmmm); and it’s been a downhill slide on decision-making from there, IMO. The mask-waffling and departure of Dr. Acton did the most damage, I believe, to Ohio’s reputation as handling this well.

He did a dinnertime address last week where people expected him to set some hard restrictions like mask requirement or some form of shut-downs, but it turned out to be only a plea to “step up and do your part to protect others.”

Yesterday a mask requirement went into place for all of Ohio starting today 6pm.

So yes, early on Ohio WAS strong, and I’m relieved about the (way too late IMO) state-wide mask mandate, so we’ll see if Ohio can somehow bounce back from the spike in numbers and do better from here.

I think the government of California is handling it relatively well, it’s just that Californians aren’t. We locked down early and comprehensively, but as soon as we eased one thing (socially distant dining) everybody decided the epidemic was over and now we’re the worst in the nation for infection rates.

I’m pretty happy with Colorado’s response. We got hit initially by tourists coming to ski and we were one of the first states to lockdown. When we reopend it was slowly and we’re only just seeing a rise in cases and hospitalizations. We have started shutting down again but doing so in a targeted manner based on the data so rather than shutting down the state we are focusing on masks and eliminating risky indoor behavior. I think mistakes have been made but when you look at all of the surrounding states it’s a miracle that we are in the bottom 10 of deaths/capita.

I don’t know, the North East Governors were all grave and serious in every press conference, I feel like Newsom was glib and not anywhere near serious enough when I saw him. I think they accelerated the openings too quick. I think he was part of the problem.

It’s even worse if we look at top five states in seven day average of new deaths per day per 1,000,000 residents.

Arizona is, right now, by far the worst state as far as deaths are concerned.

Arizona’s policies let the virus run unchecked for the entire month of June and they are paying a price for that now. They are doing much worse than the country as a whole because of some poor decisions. 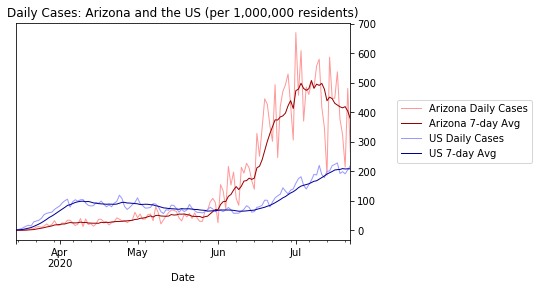 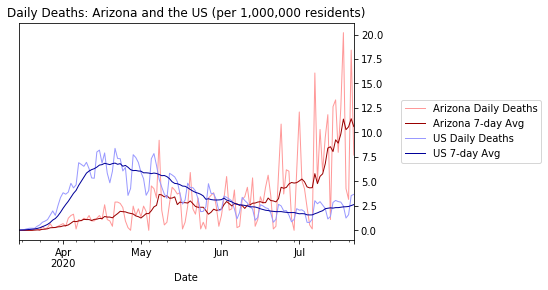 ETA: Top six I guess in both tables. Just realized that I zero indexed things.

Well, New York pushed the curve down very well. So it did well on that front. Although Cuomo’s putting of Covid patients in nursing homes is downright outrageous - hard to think of a more vulnerable population that a governor could deliberately endanger.

Yes, the Biogen conference was one super-spreader event but there were others.

Maryland is now on the NY/NJ/CT “gotta quarantine for 14 days if you come here” list. Hopefully we’re off before our son goes back to school in Ithaca. Actually, it would be better if we could get off the list sooner, since our son and his girl friend were hoping to see each other in early August, and she lives in NY. Dunno if that’s happening at this point.

In Cuomo’s defense, where else were these patients supposed to go?

Many, even most, of them need highly specialized care that simply isn’t available outside of the nursing home/memory care environment.

This situation became very real to me when my 86-year-old father, resident in a memory care facility, was diagnosed with C19. A very real concern for me, when talking with the adminstrators and medical staff of the facility where he lives, was whether or not he would be permitted to return to the facility if he were hospitalized and regained enough of his health to be discharged. My worry was that the care he needs is absolutely not available anywhere else.

Now, here’s the thing: My father lives in a pretty high-end facility (as well it should be for what they charge). Residents, for the most part, have their own rooms. The staff to resident ratio is quite good. And the people who work there, right down to the care aides, are great.

But the hideous death rates happened in the horrible Medicare/Medicaid mills where the operators cut corners and cut costs everywhere they possibly can. There are at least two residents to a room, sometimes more, those poor residents never get out of bed, the operators cheap out on staff, understaffing to the point of danger, and hiring seriously underqualified people (and the turnover rate is incredible).

The infection and death rates where my father lives were astoundingly low. I wouldn’t believe it if I read it in the papers.

The death rates in the other kind of place were a disgrace.

I’m not sure I’m so quick to blame Cuomo for this. Yes, obviously, greater oversight of the nursing home industry in New York is desperately needed, and has been for a long time. The operators have a strong lobby, and they are, for the most part, absolute shits. And Cuomo is, of course, resposible for the departments under his control.

But in the moment, what else was he supposed to do?

Look, until this crisis, I despised Cuomo. I think he’s a despotic near-crook (see his disbanding of the Moreland Commission in New York state), if not an actual crook.

But he did kind of rise to the occasion. I’ll give him that.

By the way, my father recovered. Which is truly amazing. An 86-year old diabetic with a history of COPD recovered? Him and Keith Richards. Can’t kill them.

We were locked down HARD. Streets were empty, kids were off school. Home learning was in place.
We were only allowed to go to “nearby” supermarkets, all hospitality was closed.
There has not be any community transmission for more than two months (all cases that have been reported are returning citizens / residents)
There is some shitty stuff happening around the fringes, but this is only being reported because the big stuff is so well handled.

The conversation seems to be American states, not countries.

NY was the worst
South Dakota was the best

Mostly agree Oredigger. Many Coloradans are fitness orientated, and I think pay attention.