Yeah, I had Greenie caps. I mostly stuck them on the bullets that came with my Mattel .38. Sometimes I’d put them in hand grenades and booby traps made by other toy companies.

It wasn’t so much the caps that annoyed me as it was the bullets themselves. They had to be gathered and reassembled each time you fired them, and often they just ended up getting lost.

The nice thing about the tommy gun was that you could load it with rolls of fifty caps. Since it could fire in bursts of ten shots, you would usually go through a roll pretty quickly. This taught me an imporant lesson: conserve your ammunition for when you really need it!

I actually was stopped by the cops once when dressed in my surplus Army uniform. I was 10 or 11 and big for my age, and I was carrying the .45 as a sidearm. They wanted to have a look and see what I was packing.

I suppose they could have brought me in for impersonating a serviceman, but I know now most of my insignia were wrong. I couldn’t have fooled anybody.

As a small boy, a stuffed bear that I called “Mama Bear”…until I was 5 when I threw that bear, a very nice stuffed panda, and a very nice stuffed fox, off the 11th-floor balcony to see if I could still see them from up high when they were down on the ground. I think I then went down with my grandmother to see if we could retreive them, but someone had already taken them.

When I was just about to turn 8, I started collecting Transformers. Once I got my hands on an Optimus Prime, this was my favorite toy. However…I had gotten interested in Transformers a little over a year before (mid-1986), just before the Transfomers movie came out in which they killed off a lot of the older characters (thankfully I didn’t see the movie at the time, only the trailer). The toys of the old characters were discontinued in two phases over that year when I started collecting, so getting an Optimus Prime (the Autobot leader) was a challenge. I was first given Ultra Magnus and used the truck cab, which transformed into the same robot as Optimus Prime but painted white (and you would then combine it with the trailer and a head cover to make it look like the Ultra Magnus in the cartoon). I used that as Optimus Prime and put together Ultra Magnus from the other parts. The next summer, they re-introduced Optimus Prime as a “Powermaster”. I got that as well, but yearned for the original Optimus Prime. Finally, almost two years after I had started collecting Transformers, I bought an orginal Optimus Prime (just the robot/cab, minus the trailer) from my friend Stephen M. at his family’s garage sale. I still have it in a box with some other Transformers and other toys in my parents’ house.

I loved my Rockem Sockem Robots. . I was totally into Mohammod Ali at the time.

Didn’t anybody have a Ding-A-Ling?

G.I. Joe. The original 12-inch tall ones, not those 4-inch monstrosities that came along later.

GI Joe, yeah! I had a big collection of those too.

I wanted more, but my mother said “Oh, don’t worry. They’ll be around for years.”

Yeah, right. Thanks a lot, Mom!

We actually had more knock-offs than actual Joes. Louis Marx and Company had “Johnny West”, “Sir Gordon the Golden Knight”, and “Eric the Brave Viking Warrior”. There was one called “Hombre”, which I guess was a Latino version of G.I. Joe.

LEGO. Primarily by default. Even though we did have some Transformers and GI Joes and He-Man, whenever my brother or I asked for the latest shiny new toy, my parents’ reflexive response was always to shove the LEGO bin at us and say, “make it.”

I love the smell of caps in the morning. It smells like … VICTORY!

Especially Confederates vs. Yankees, but also Cowboys and Indians.

That was a long time ago.

Fisher Price Little People. We had a number of the playsets, and I used to drag them out into the yard and play for hours, creating worlds and elaborate scenarios. 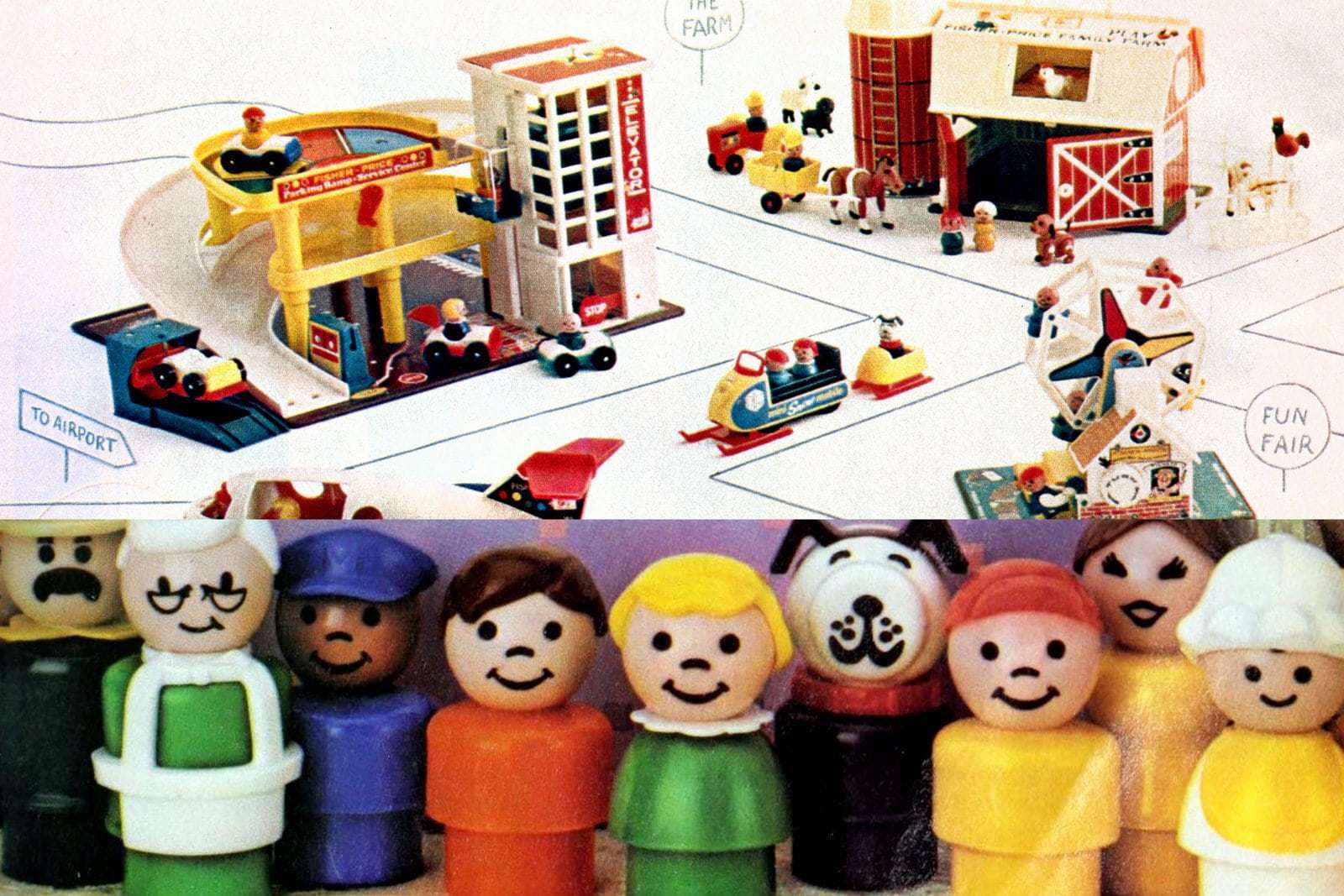 Look back at these vintage Fisher-Price Little People play sets &...

Fisher-Price debuted the Little People -- originally known as the "Play Family" -- in late 1965. At the time, the little dolls were made of hardwood, and had plastic hair and accessories (like the hats

My favorite type of toy was Star Wars figures (I had dozens) but my favorite single toy was a toy Rodan I had. It was huge. Like a three foot wings span and the wings could flap, jaws that bite and claws that held the aforementioned Star Wars figures. It was awesome.

Meccano for me. I had loads of it in a box my father had specially made. I spent hours building things and learned a lot about how structures work.

Meccano is the only thing that I can recall playing with over a period of years. And assembling and painting model planes and other implements of war. Mind you, when I was a kid I didn’t have or really want much in the way of toys. I spent most of my time reading, playing sport or outdoors with my brothers or friends.

Yeah, those sets were awesome! We had the garage, the houseboat, and I think the school bus and airplane.
We also loved our Legos, but when I played alone, I spent a lot of time drawing on the chalkboard. I really dug my Colorforms too.

At age 10, it was too early for Transformers but I had the usual array of Legos and Lincoln Logs and Star Wars sets and all that. But, when I picture myself playing in my room at that age, I mainly remember those things serving as elaborate set pieces for my army men fights. Room-spanning arenas of bunkers, forts and barricades for the Green and Grey armies to fight it out, almost always ending in one man on each side remaining and who would emerge the sole bloody victor.

Sometimes they would have to join forces to stop Godzilla or Rodan or a Shogun Robot warrior and sometimes their opponent would be a ten year old boy imagining his toys turning upon him but those army men probably gave me the most mileage. Or at least the most memories that lasted until today.

With the Thingmaker and genuine Plastigoop.

Hells yeah. Talk about smell memory.
I always gravitated toward craft type things. I also had lots of Shrinky Dinks and Playdoh (no fuzzy pumper barbershop though

) Another fun one was a Shrunken Head Apple kit.
But I think my favorite was my Cher doll, complete with a dressing room and many fabulous outfits. Unfortunately her hair got real nappy real fast.

I had 2 younger sisters (#3 surprise sister came along when I was 12) so instead of playing with certain toys, we always played school or house. We had an old kids-sized rolltop desk for the teacher, an old school desk (no idea where it came from), and a chalkboard. We’d spend hours in the basement playing school. My mom would save the empty cereal, cracker, etc. boxes for us, and then we’d play house and/or store. We also had woods around our house so we were always building forts, which I guess is like playing house.

My favorite actual toys would have been Barbies, baby dolls (I had Baby Tender Love & Baby Boo), fashion dolls that were like giant Barbies, Chinese jump rope, board games, wooden blocks, horse figurines, paint by numbers, and coloring books.

I was really really in to my dollhouse. First I had a Fisher Price plastic one which was very nice (you could plug in the lamps!) and then my family upgraded to a nicer wooden one.

Everyone lived in that doll house. Lots of Happy Meal toy friends. I never had money for good furniture or accessories so I made a lot of my own. The family car was a Playmobil dump truck. My dad took me to a real doll house store a couple times and I only had enough money for just a few things so my family had a nice telephone and like 3 dishes and a copy of The Racing Times.

I played with that thing probably into my freshman year of high school. It’s in my basement now, all set up and ready for play.

The Might Men & Monster Maker kit.
One of my few toys from the 70s my mom held onto and keeps in her house for when she has guests with small children. She brings this out and it’s a huge hit.
My niece’s son (so my Mom’s great grandson) loves the thing.